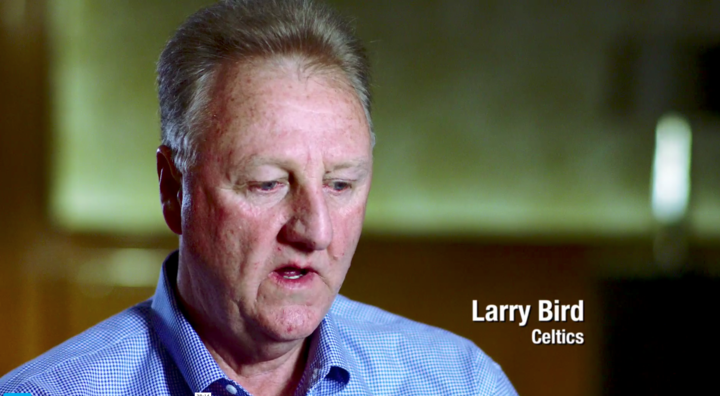 There were so many notable players in the Celtics-Lakers rivalry covered in ESPN’s newest 30 for 30 (Celtics/Lakers: Best of Enemies, which AA’s Ben Koo reviewed here; it begins Tuesday night at 8 Eastern) that it would be impossible to fit all of them into something promoting it, especially considering the decades spanned by that. However, Larry Bird probably isn’t the best choice to leave out. The 30 for 30 Twitter account did that with a roster-building tweet that managed to mention 25 other Lakers and Celtics players, but leave off Bird; they then got relentlessly trolled over it, deleted the tweet, and still kept taking more criticism. Here’s a screenshot of the tweet:

Don't worry @30for30 I saved that ATROCIOUS tweet you deleted about the #CelticsLakers
"Who's Larry Bird?"

Bird was usually listed as a small forward, so leaving him off there in favor of Michael Cooper and Adam Morrison is just weird. Of course, the goal here appears to be finding one player at each value ($5 through $1) at each position rather than the best five players at each position, but if you’re determined to put Baylor at $5, why not Bird at $4 (bumping Havlicek down) or $3? And there are some other issues with this chart, too, particularly the misspelling of Robert Parish. But it’s the Bird omission that really created backlash:

I guess that Larry Bird never played. Must have been my imagination.

Oh dear god I missed that…. WOWWWW!!! Someone is bad at their job today.

Leaving Larry Bird off a list of 80's Celtics from a 30 for 30 film?That's the ultimate middle finger to @BillSimmons. STRONG move, ESPN. https://t.co/xD6YwLaF53

Whoever made this graphic should be fired then tarred and feathered

Uh…missing Larry Legend. I sense an intern getting fired for this.

Bird is in the film, as you can see from the photo up top, so this seems to be just a pretty innocent mistake from whoever was running the social media account. And those happen. But it’s interesting that even the montage of names in their 20-second trailer doesn’t include him either:

“Kareem, Maxwell, Worthy, Parish, Riley, McHale, Cooper.” Hmm. Of course, that list doesn’t include Magic Johnson either (though he’s featured in the start of the trailer), and it doesn’t include the many prominent later or earlier players, but Bird still feels like an unusual omission. There’s a lot omitted there, though, so this was much less notable than leaving him off a 25-person list.

In any case, it doesn’t look like there’s anything bigger going on here, especially with Bird appearing in the film. It seems like just a social media misstep. But it’s one that definitely provoked a lot of backlash, and one that the internet didn’t want to let the 30 for 30 account forget.