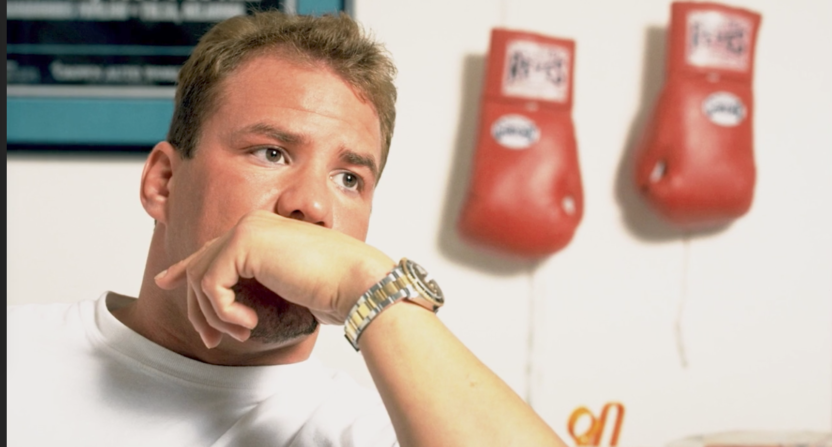 Installment: #94 by ESPN’s count (#95 by mine, counting the O.J. doc as one installment, although ESPN initially counted it as five different 30 for 30s, but now seems to list it separately, not as part of the series. Additionally, one finished project in Down In The Valley has been suspended from airing.)

Most Similar To:  The Announcement, Tim Richmond: To the Limit, Brian and The Boz

Review: ESPN’s newest 30 for 30 installment, Tommy, has been available to stream for a few weeks now but will make its television debut on Wednesday night. Clocking in at 90 minutes with commercials, ultimately the reception or interest one has for this installment will hinge on one’s ability to take in an film that lacks a true protagonist or central event.

One of the things that works against Tommy is the further you get into the film, the more you question if there is anything redeemable about Morrison. For the majority of the film, friends, family members, and those close to him in the boxing community walk a fine line in describing Morrison, an obviously flawed individual who showed spurts of humanity and kindness but never turned the corner and accepted his demons and ultimate fate.

From humble beginnings to heavyweight champ to an unbelievable downward spiral, our new film is, #Tommy.

There are certainly compelling moments in the film and telling insights from those close to Morrison, but ultimately, the subject matter doesn’t allow you to feel warmly for Morrison, how he treated people, or how he chose to deal with his various struggles. While a lot of 30 for 30s and documentaries in general don’t leave viewers with a positive feeling, I think typically their popularity stems from either hitting a “People need to know about this!” or “This is an INSANE story that blew my mind!” nerve. Most of the material in Tommy will be fairly new to most viewers, but I think most who watch will wonder if the 90-minute investment in a character and story that ultimately doesn’t stray far from a depressing biography narrative was worth the time.

From a filmmaking standpoint, Tommy is on solid footing, but not in elite company for the 30 for 30 series. The pacing is fine, the interviews are telling, and the footage from Morrison’s career add some action to a pretty depressing topic. I think the directors made an effort to limit the negative aspects of Morrison’s story so that viewers would stay somewhat invested in his story, hoping for some type of redemption. There are a few places where there seems to be some type of momentum that Morrison’s family life, professional life, health, or outlook on life is on the verge of turning a corner only to have that momentum dashed with newly presented fact or story. This is somewhat similar to the recent installment All By Himself, which seemed to fall flat in terms of reception and ratings.

#30for30 returns tomorrow with #Tommy, the story of Tommy Morrison!

Here's how the boxer was discovered for Rocky V. pic.twitter.com/RNp6E21S95

A few interview participants made me raise an eyebrow as Ross Greenburg, formally the head of HBO Sports, gave some great insights into Morrison’s rise to prominence which took place mostly on HBO cards. Greenburg and many of his former colleagues at HBO made quite a collection of sports documentaries that have been since overshadowed by 30 for 30 and I’ve gotten the sense that the old HBO gang hasn’t appreciated what they feel is a disproportionate amount of recognition for 30 for 30 compared to the work they did. Jason Whitlock also has two appearances and says nothing of consequence, which may throw many cyber humans off given their brains have been reprogrammed to expect incoherent ramblings from the FS1 personality.

If I had to nitpick a few things, I felt the film would have benefited from more actual boxing footage from Morrison’s career and the Rocky film he was in, but that may just be a licensing issue. I’d also say, given how many loved ones participated in the film, it felt at times like the directors opted to not drill down too deep on topics that didn’t paint Morrison in a positive light. There were a few times where the film presents a new detail about Morrison that makes you do a double take, but the topic seems to change quickly before you can wrap your head around whatever was just volunteered.

Ultimately, the film is well crafted and is certainly noteworthy enough but will likely test the patience of many, as the last third of the film at times borders on cringeworthy. I think most will stomach these moments because they’re far enough along to finish viewing Tommy, but many may wonder if Morrison was an individual that needed  a full 90 minutes devoted to. As interesting as Morrison’s rise and tragic fall were to relive, I’m not sure the appetite is there right now for such a somber story about an individual I’m sure many will struggle to embrace.