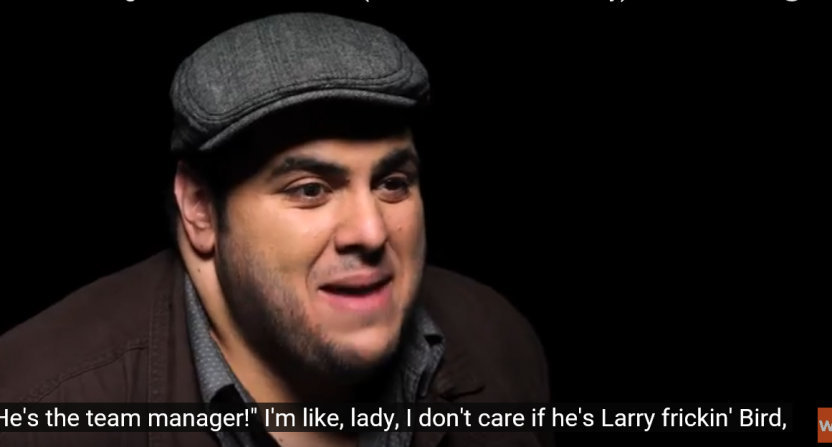 The 20-point game autistic student manager Jason McElwain posted 11 years ago this week had a huge cultural impact. It led to McElwain appearing everywhere from the CBS Evening News to Oprah to CNN, meeting Magic Johnson, Peyton Manning and President George W. Bush, and winning that year’s ESPY for “Best Moment in Sports.” It also led to a 10-year retrospective from ESPN last year, which was well done and covered a lot of what went into that moment. Now, however, it’s spawned something much less serious; a 30 for 30 parody from online comedy group WeTheInternet, focused on fictitious gambler Harry Tergenn losing thousands thanks to McElwain’s performance:

“Basketball at that level is so pure, you know? The kids are only there for the love of the game. That’s why I only bet on high school games, the purity of it!” That’s great, plus “I bet the under, and unless Greece Athena hits like, six three-pointers in a row, I’m up $10,000! Ten thousand dollars! With that kind of scratch, I’m paying off my bookie and I’m taking what’s left over and bringing my girlfriend and her kid to Disney World. I’d been promising them that for years, and finally I was going to make it happen.”

This whole parody is terrific, from the 30 for 30 music to Harry Terjanian’s performance as “Tergenn,” which definitely recalls a lot of passionate 30 for 30 interviews. Writer Lou Perez gives him some great lines, and director/editor Greg Burke shoots this in a way that feels very 30 for 30, especially with “Tergenn” close to the camera in front of a black background. It’s also a particularly solid choice of subject considering how thoroughly ESPN covered McElwain’s story, and how they’ve done several 30 for 30 pieces involving sports gambling; this particularly brings up memories of Playing For The Mob, about the Boston College point-shaving scandal.

While this one’s obviously a fake story, it’s also a good reminder of there being two sides to every sports moment. For all those overjoyed about a particular result, there are usually some crushed by it too. There probably weren’t actual gamblers upset about McElwain’s game, but hey, you never know. At least WeTheInternet has given us a look at how those hypothetical gamblers might have been feeling…