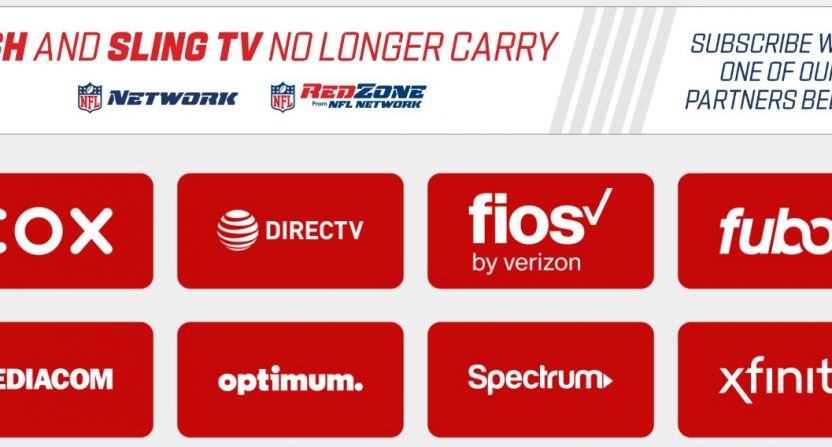 Perhaps the best time for a league network to go dark on a cable or satellite operator is during their offseason, because fans aren’t missing any live games. Thus, NFL Network and NFL RedZone going dark on both Dish and Sling this Thursday night isn’t exactly the most surprising or devastating thing in the world, especially given the numerous carriage disputes involving both Dish and NFL Network in recent years.

NFL Network’s website has a banner advertising that both it and RedZone are no longer available on Dish.

The NFL also released a lengthy statement about the dispute. Here’s the full thing, even though most of it is just talking about how great NFL Network is.

​LOS ANGELES, June 18, 2020: As of 9 pm ET NFL Network and NFL RedZone are no longer available to DISH and Sling TV subscribers. While NFL Media remains committed to negotiating an agreement and has offered terms consistent with those in place with other distributors, DISH has not agreed.​

Without a distribution agreement in place for NFL Network and NFL RedZone, DISH and Sling subscribers will miss out on daily shows Good Morning Football, NFL Total Access and NFL Now and a newly launched Player’s Choice series featuring classic games and long-form storytelling from the NFL Films archive.

For the upcoming season, NFL Network remains the only place to watch all 65 preseason games, including a record 23 live out-of-market games. Regular season action on NFL Network continues with a slate of exclusive games kicking off with a trio of matchups at the start of the NFL Season in addition to two Saturday doubleheaders in Weeks 15 & 16. In addition to games, Sunday coverage on NFL Network features the most comprehensive pregame show on television – the Emmy-nominated NFL GameDay Morning.

An icon of the sports programming landscape, NFL RedZone takes fans from game to game to see the most exciting plays as they happen. With host Scott Hanson, fans can follow the best of live NFL action from across the country and every touchdown from every game Sunday afternoons.

NFL content has never been more popular across the media landscape. According to the Nielsen Company, 180 million people tuned into the 2019 NFL regular season with an average of 16.5 million watching per game. NFL games accounted for 47 of the 50 most-watched TV shows among all programming during the 2019 regular season.

As the only network 100% dedicated to coverage of America’s most popular sports league, NFL Network is committed to serving the millions of NFL fans by reaching fair distribution agreements with the pay-TV industry.

Unsurprisingly, Dish points the finger directly at NFL Network on their website.

NFL
The NFL has chosen to remove their channels during these unprecedented times.

NFL Network
NFL RedZone
We appreciate your patience as we continue to work with the NFL. Our goal is to reach a fair agreement with the NFL, bringing their channels back before the season begins so that you don’t miss any live sports action.

In the meantime, below is a free alternative viewing solution that may work for you:

The NFL App – live streaming of NFL Network on mobile devices, available for free (NFL Network is available to stream using a cellular network on phones)

Dish also released a statement from Andy LeCuyer, SVP of Programming for DISH and SLING TV, which seems to indicate that fans should be optimistic about the channels coming back.

“We are working with the NFL to continue carrying their channels. Our goal is to reach a fair agreement, bringing NFL channels back before the season begins so that fans don’t miss any live sports action.”

Here’s a brief list of Dish’s sports-centric carriage disputes over the past year, many of which focus on RSNs.

Needless to say, NFL Network falling onto the chopping block isn’t exactly a surprise, especially since there won’t be live football on the network for roughly two more months.

As for NFL Network, it’s been involved in a long-running, somewhat bitter sounding carriage dispute with AT&T over the past year, which resulted in both NFL Network and RedZone being dropped from U-Verse and what was then known as DirecTV Now.

It’s impossible to know whether or not Dish and NFL Network will come to an agreement before the start of the NFL season, and there are definite reasons why a deal will or won’t get done, from the NFL’s standing as a TV property to Dish’s often contentious disputes with networks to the potential issues that COVID-19 could cause to the NFL season itself. Whatever ends up happening, if I were a Dish customer, I wouldn’t start panicking yet – after all, it’s still only June.