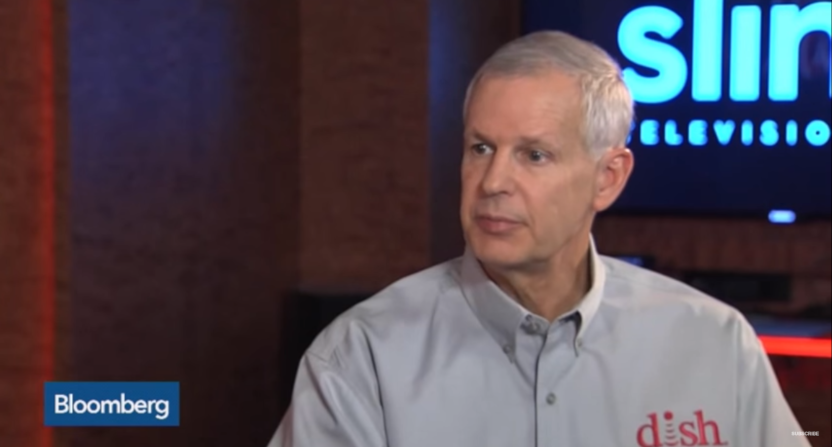 Much of the cord-cutting discussion has been about people leaving traditional cable or satellite packages for streaming bundles, but we’re now seeing more and more losses from streaming bundles as well. AT&T revealed last month that they lost 215,000 net subscribers at AT&T TV Now in Q4 2019 (in addition to 945,000 lost at DirecTV and AT&T U-Verse), and Dish announced Wednesday that they saw their first-ever subscriber decline (94,000) at Sling TV in Q4 2019 (in addition to 100,000 at Dish itself). That’s significant considering that Sling TV’s growth has usually been offsetting (or more than offsetting) the declines at Dish, and that may explain some of the recent remarks from Dish chairman Charlie Ergen (seen above in a 2015 interview with Bloomberg News) remarks on how he sees them eventually merging with DirecTV (as relayed by Georg Szalai and Etan Vlessing of The Hollywood Reporter):

Ergen also on the call said a long-rumored merger of DirecTV and Dish was “inevitable” — despite reticence from AT&T to divest itself of the asset — as neither satellite TV-delivered linear TV service was growing.

“The growth in TV is not coming from linear TV providers, but from huge programmers,” Ergen told analysts with a reference to streaming era competition. He conceded regulatory issues stood in the way of a potential DirecTV-Dish merger, but added industry logic made a transaction likely at some point.

“You just can’t swim upstream against a real tide of big players.”

The idea of a Dish-DirecTV merger has been discussed before, but there are a few things that perhaps make it more likely this time around. For one, AT&T has become more of a “huge programmer” thanks to their acquisition of Time Warner in 2018, and that’s left them with a fair bit of debt that’s motivated discussions of them selling off the likes of DirecTV and their regional sports networks (even if the latter may no longer happen thanks to low bids). DirecTV isn’t as important to them as it once was. For another, several big media mergers and acquisitions once thought likely to hit huge regulatory issues have been approved recently, from AT&T-Time Warner to Disney-Fox to T-Mobile-Sprint. And for a third, the growing numbers of streaming bundle solutions mean that owning both of the big satellite providers doesn’t give you as much control of the TV market as it used to.

None of that means a Dish-DirecTV merger is necessarily as “inevitable” as Ergen thinks (first, it would require AT&T to either actually sell DirecTV, which they haven’t committed to yet, or to buy Dish, which they probably wouldn’t do given their debt challenges from the Time Warner acquisition), but it certainly seems like more of a possibility at this point than it has in the past.

Another interesting Ergen comment on that call came in relation to the Sinclair (former Fox) regional sports networks, which went dark on Dish and Sling TV last July. And later in July (on Dish’s Q2 2019 conference call), Ergen made it sound like they wouldn’t be coming back, saying “It doesn’t look good that the regional sports will ever be on Dish again. …The frustrating thing is, they are not very good economic deals for us. We have real data that tells us that the channels are overpriced, and Fox had a lot of leverage to get people to overpay when they owned them.” But his comments this time around appear a bit more conciliatory:

Ergen on the afternoon analyst call also made another overture to the Sinclair Broadcast Group to possibly conclude a deal that would see the former Fox Regional Sports Networks return to his distribution platforms.

But he repeated Dish sought a fair price, not a steep one, for the regional sports programming. “It doesn’t take real rocket science to know what our customers watch and how much they watch and what the value of the programming is,” Ergen argued.

The RSNs have been dark on Dish and Sling since July 2019, and Ergen insisted they are worth even less in value today than last year. “We’ve had a great relationship with Sinclair for some time. But whether you can put humpty dumpty back together remains an open question,” Ergen cautioned.

It’s unclear if that will actually get anywhere given that Dish and Sling have not carried these channels for over half a year now, but it’s interesting to see Ergen seemingly moving a bit from “It doesn’t look good that the regional sports will ever be on Dish again.” And there have been plenty of past Dish carriage disputes that have eventually led to agreements even after heated rhetoric, notably with Fox/FS1/FS2/BTN last fall (a dispute that only ran for a couple weeks, but saw commercial blitzes and big games missed before the eventual deal). So maybe there’s some hope for Dish and the RSNs yet.

Keep in mind that there’s still plenty of rhetoric flying around, though, including with promoted anti-Dish tweets from a “Fans Speak Out” account that appears to exist only to bash Dish (it doesn’t mention that it’s tied to Sinclair, but what it’s promoting on Twitter, Facebook and its website sure fits with Sinclair’s goals when it comes to Dish):

In any case, there are certainly issues at Dish (where they’re also trying to roll out a wireless service, and are looking for investment there). But they’re far from alone there; as per Variety‘s Todd Spanger, traditional pay-TV lost six million customers last year, a seven percent year over year decline, and 1.5 million subscribers in Q4 alone. And on a year-over-year basis, Dish actually posted better results than many competitors; they had 11.99 million total pay-TV subscribers at the end of 2019, down just 336,000 (2.7 percent) from the 12.32 million they had at the end of 2018, and they actually gained year-over-year in terms of Sling TV subscribers (+175,000). And their Q4 subscriber loss of 194,000 was lower than the 334,000 they lost in Q4 2018 (which included carriage disputes with HBO and Univision).

But it’s interesting to hear Ergen talking about a potential merger with DirecTV and seemingly offering some hope for a Sinclair RSN return. That suggests that Dish isn’t all that content with the status quo. And that’s probably good, considering that they’ve now seen a Sling TV decline for the first time.

[The Hollywood Reporter; photo of Ergen via a clip from Bloomberg News on YouTube]