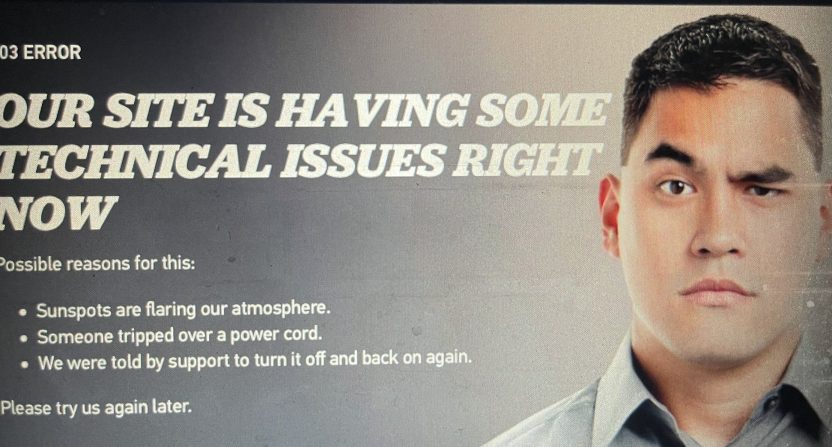 In what is expected to be DirecTV’s final year as the exclusive home of Sunday Ticket, it appears that they’re going out with a bang. When many football fans tuned in to watch highly anticipated Week 1 action, DirecTV’s website and app were either down or blocking out users who should have been able to watch games.

Different users reported different problems with DirecTV early on Sunday. Some were locked out of the service. Others received error messages claiming incorrectly that they were located inside an NFL stadium. Others couldn’t even sign in. Others still reported that the feed was lagging by extensive amounts of time.

I am not near an NFL stadium but Directv thinks I am so the Sunday Ticket app I paid for doesn’t work. ⁦@DIRECTV⁩ continues to provide terrible customer service. pic.twitter.com/Mzv1TUpJF0

DIRECTV charges $83 a month for NFL Sunday ticket to stream. This morning the servers are crashing and the telling us that’s the way it goes. Try again…Are you kidding me? What a scam

Looks like Sunday Ticket is also in regular-season form, which isn’t a good thing ??‍♂️

Apparently @NFL Sunday Ticket has ?the bed nationally…can’t watch any games on iPad because I’m 25 miles from an NFL stadium. They haven’t even addressed it. Refund time!

The @DIRECTV Sunday Ticket is the biggest POS app in app history. If you live within 50 miles of a stadium, it’s blacking you out of all games. Pathetic.

my sunday ticket feed is 86 minutes behind lol

“We’re aware some customers are be unable to access NFL Sunday Ticket online or through the app,” DirecTV said in a statement, via Eli Blumenthal. “In the meantime, we recommend satellite customers to watch on TV.”

Considering many DirecTV viewers were likely out at bars or signed up for the service because they don’t have local TV service, that advice probably fell on some pretty deaf ears.

DirecTV is also pretty used to apologizing for streaming issues involving Sunday Ticket. And considering this is the last season they’ll be the exclusive rights holders, there isn’t too much incentive for them to fix the issues at this point. NFL fans should probably expect to hear a few more apologies and recommendations to find alternative viewing options in the weeks ahead.

Hopefully, Google or Apple or whoever ends up getting the rights can figure out how to avoid these kinds of issues, though NFL viewers have been trained to expect the worst at this point. Lord knows they’re going to pay enough for the rights.

Speaking of, The Verge reported that NFL Plus, which is supposed to allow you to watch live in-market games, was also causing headaches for subscribers. There were reports of game scores not loading and an inability to get streams to load.

There were also apparently some issues with NFL RedZone for Sling TV and YouTube TV subscribers.

RedZone seems to be having issues across a few platforms. Can’t get it to play on Sling TV, NFL app or DirecTV a Sunday Ticket app. Anyone able to watch? pic.twitter.com/uFZMgJWGMQ

Anyone else having issues with RedZone on NFL app not working on a smart TV through cable authentication? pic.twitter.com/ksK8uBcBwu

We are aware that some customers currently do not have access to RedZone. We're actively working to resolve the issue.

The fun never ends for many NFL viewers.