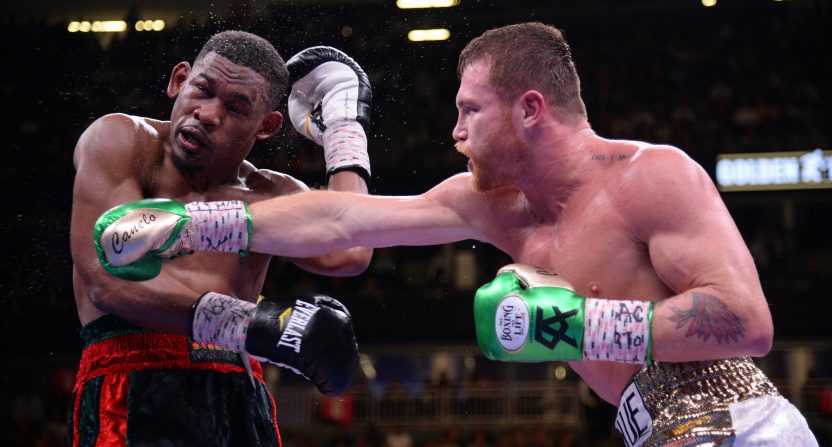 There’s going to be a combat sports pay-per-view showdown on November 2nd.

The UFC will be heading to Madison Square Garden for a night lacking a big gold belt on the poster, but not starpower, as Nate Diaz takes on Jorge Masvidal in the main event. They won’t be the only option for fight fans on that Saturday night, however: DAZN announced on Friday that on November 2nd, they would be airing the long-rumored fight between Canelo Alvarez and Sergey Kovalev, with Kovalev’s WBO light heavyweight title on the line.

This will be Canelo’s third fight on his mammoth 11-fight, $365 million deal with DAZN, and the third to go head to head with a UFC event. However, the UFC cards that were matched up with those fights weren’t PPV events – one took place on Fox (main evented by Al Iaquinta and Kevin Lee, a pair of top ten lightweights), and one aired on ESPN+ (main evented by Iaquinta again, this time against Donald Cerrone).

But this time, it’ll be a different story. Both events this time will be behind pricey paywalls ($20/month or $100/year for DAZN, $60 for the UFC PPV for existing ESPN+ subscribers or $80 for a year’s subscription and one PPV for new ESPN+ subscribers), and there’s no (legal) free or vastly cheaper option for fight fans. And since the events start at roughly the same time, fans will have to choose which big fight they want to watch live – and which one they want to miss, or watch after the fact.

The calculus here would seem to favor the UFC, which has the lesser fight on paper, but will cost fans the same amount of money whether they watch it live or a week later. I can’t see many fans ponying up their $60 or $80 or whatever on a Tuesday night to watch the Masvidal-Diaz fight, while I can see fans (especially those already subscribed to DAZN) watching the Canelo-Kovalev fight after it’s happened, if only because $20 is less of a hit to their wallet.

I think that this was inevitable, especially with the UFC’s increasingly expanding and bloated calendar of fight cards. I also think that this is a smart fight for DAZN to use as the one to go head to head with Diaz-Masvidal. With Canelo moving up in weight, there are plenty of interesting storylines to build alone, and considering how much of DAZN’s efforts in the US have been built around promoting Canelo, he’s the guy you want in that spotlight.

If DAZN really wants to make boxing a cornerstone of their platform in America, taking one of their biggest fights head to head with the company that some claim has killed boxing domestically is the way to do it.