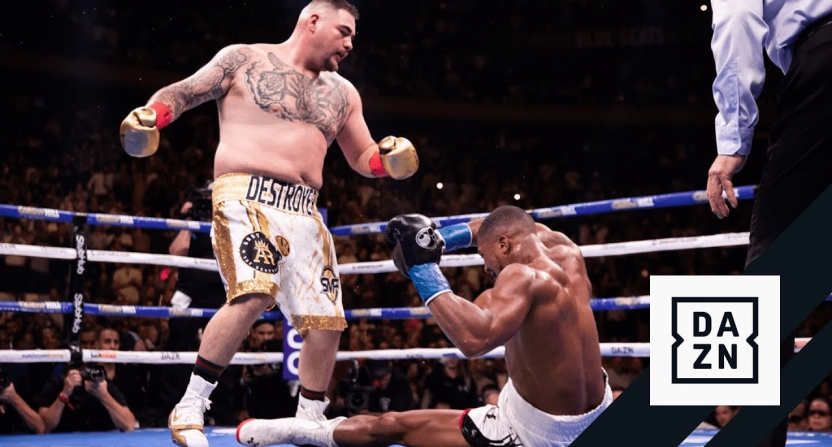 When Andy Ruiz Jr. knocked out Anthony Joshua at Madison Square Garden earlier this year, it was one of the bigger upsets in modern boxing history.

That there would be a rematch was a foregone conclusion, but pretty much all of the other relevant details (chiefly: when, where, and for how much money) remained up in the air. Today we at least got an answer for the when and where: December 7th, in (sigh) Saudi Arabia. We also know that for Americans hoping to tune in, it will likely be available exclusively on DAZN, as was the first Ruiz-Joshua fight.

That news broke today via an announcement from promoter Eddie Hearn. From ESPN.com’s Dan Rafael:

Hearn was mum on any other details about the event — dubbed “Clash on the Dunes” — for which there will be a news conference on Monday in London that will include Omar Khalil, the managing partner of Skill Challenge Entertainment, the group putting up tens of millions of dollars to bring the fight to Saudi Arabia.

The fight will be televised on Sky Box Office pay-per-view in the United Kingdom, which is only two hours earlier than it is in Diriyah, meaning likely massive business for the fight compared to if it was in New York, which is five hours behind London, meaning the bout would take place in the wee hours of the London morning.

The fight likely will be streamed on DAZN in the United States, although that deal has not yet been finalized, a source told ESPN. DAZN, which carried the first fight, pressed for the rematch to be in New York but would pay eight figures less with the fight in Saudi Arabia than New York because of the seven-hour time difference, the source said.

That location change is unfortunate for DAZN in some respects; obviously having a big fight can be a boon for a subscription service, but December 7th in what will be an afternoon window in the United States means the fight will be going up against the SEC Championship game. Fortunately, there’s a silver lining, as both Rafael and The Athletic’s Mike Coppinger noted: it’s going to be a lot cheaper to get the rights.

DAZN viewed #RuizJoshua2 as a major subscription driver in the U.S. The heavyweight title rematch will still bring in plenty of new subscribers, but its likely the fight will go head to head with the SEC Championship https://t.co/mqwPxG3iQ3

DAZN might have preferred to pay more for a shot at a larger subscriber pull, but this is still a good thing for a service that’s built a large chunk of its brand around combat sports.