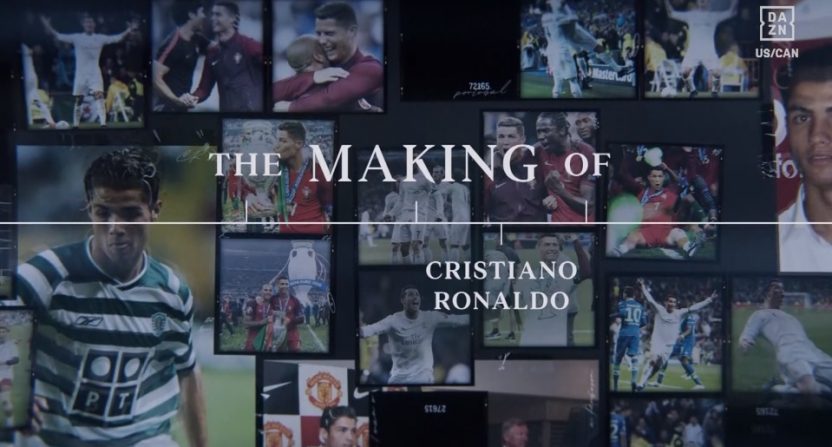 DAZN has launched a new docuseries called The Making Of, which consists of three, three-part series, with each series focusing on one iconic soccer figure. Each part of the series focuses on one match in the featured figure’s career, and how that match helped them become the player (or coach) they are today.

For instance, the three episode series on Cristiano Ronaldo spotlights a friendly between Sporting Lisbon and Manchester United (the match that inspired United to sign him), a 2016 Champions League quarterfinal against Wolfsburg (where a Ronaldo hat trick pushed Real Madrid to a 3-2 aggregate win and, eventually, their 11th Champions League title), and the 2016 UEFA Euro final between Portugal and France (a match won in extra time by Portugal, despite Ronaldo going off early in the first half with an injury). The three episodes in each series have titles helping explain why the matches were chosen (in the Ronaldo series, those three titles are The Audition, The Premonition, and The Greek Tragedy).

Here are the details of each three episode series, per DAZN.

And a teaser that DAZN tweeted out a week ago.

Every athlete has moments that define their career. #DAZN gives fans an in-depth look of the games that defined the careers of @neymarjr @Cristiano and José Mourinho in the new #DAZNOriginals, The Making Of. pic.twitter.com/JCLcDig6mA

The production quality of the series is fantastic, with archival footage from the matches, interviews with the subjects of the series and other figures critical to the matches themselves, and breakdowns of the matches from the subjects all featured. It’s compelling to hear Ronaldo talk about what was going through his head and what he was doing during that match against United while he’s watching it, and the candidness and openness from everyone interviewed is quite interesting, especially given how self-contained soccer culture is.

This is not DAZN’s first original series, but it is the first series available globally in all of DAZN’s markets. Given the lack of top-tier soccer rights DAZN has in America, it’s tough to see this series getting much attention here, but in a market like Canada (where DAZN owns the rights to both the Premier League and Champions League) or Spain (where Ronaldo, Neymar, and Mourinho all spent significant chunks of their career), I can definitely see subscribers tuning in and raving about the series.

Overall, The Making Of isn’t the most original idea for a series (“players talking about iconic matches or games they were involved in” is a tried and true strategy that is very hard to screw up), but it’s still an interesting, entertaining series, and the shorter episodes (around 25 minutes each) means there is not a lot of dead time in each chapter and you can knock them out pretty quickly. As mentioned earlier, the production quality is great, and the candidness of the subjects is welcome. All in all, this series is a winner for DAZN, and I’d love to see more episodes in the future.