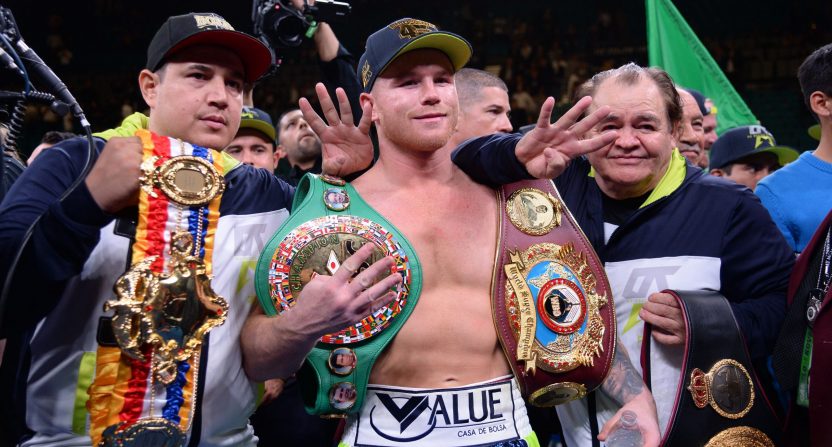 Saul “Canelo” Alvarez is a pretty big deal in the world in boxing. The 30-year-old Mexican boxer is a four-division world champion and has been since 2018. He currently holds the WBA (Super), The Ring and lineal middleweight titles, and the WBA (Regular) super-middleweight titles. So it’s no surprise that a network that specializes in boxing broadcasting would want to lock him up for the foreseeable future. That’s what DAZN did in 2018 when it inked Alvarez and promoter Golden Boy Entertainment to a 5-year, 11-fight deal worth a minimum of $365 million. That made Alvarez the highest-paid athlete in the world.

At the time, there didn’t appear to be much of a downside to the deal. DAZN was getting one of the best fighters in the world in his prime. The 11-fight contract would attract a lot of eyeballs to a platform that wants to penetrate both the boxing and MMA markets. Short of Alvarez’s career taking a shocking nosedive, it seems like a real win-win.

And then COVID-19 happened.

The inability to host scheduled fights puts a serious damper on DAZN’s bottom line and the company halted boxing matches in February. In March, DAZN announced it was withholding rights fees for canceled content. They also noted that furloughs for employees were coming soon. DAZN paused all scheduled boxing events until at least July which meant that Alvarez’s proposed fight with Billy Joe Saunders, which was initially set for May 2, was off.

Those July plans rolled into the fall and Alvarez was presumably slotted into a match against WBA super-middleweight champion Callum Smith on September 12. However, multiple sources told ESPN that DAZN is expecting Alvarez to take a steep pay cut for the fight, and that’s not sitting well with his camp. His lawyer, Greg Smith, told ESPN that Team Canelo doesn’t seem intent on honoring any discount rates.

“Canelo is in great shape. He’s been training hard, he is absolutely ready and on track to fight in September, ” said Greg Smith, Alvarez’s lawyer. “If it’s up to him — and him only — he would’ve already announced the fight. … There’s obviously other parties and other things involved that are out of his control. But everything he can control, he’s on track and prepared.

“Everybody, including Team Canelo, is waiting to find out if DAZN’s going to live up to its obligations. … I am aware of no other sticking points.”

For what it’s worth, Golden Boy Promotions president Eric Gomez told ESPN a few weeks back that he expected Alvarez “to make less in his next fight.”

DAZN appears to be asking for mercy from Alvarez and many of the other fighters it signed to lucrative deals over the last few years in their attempt to corner the boxing market. However, they do themselves no favor by crying poor just weeks after signing a $4.9 billion TV deal with the German Bundesliga.

ESPN reports that, according to a source, DAZN isn’t happy with the matchups Alvarez has been involved in so far under their deal. Alvarez defeated Daniel Jacobs in a unanimous decision in May 2019 and Sergey Kovalev in an 11-round knockout in November 2019, but they appear to want something more high-profile in order to justify their big contract, especially at a time when budgets are tight. They were very interested in seeing Alvarez fight Gennady Golovkin for a third time last year (DAZN signed Golovkin to a six-fight deal in 2019) but Alvarez walked away from the deal, which may have left a bad taste in their mouth as well.

Right now it may just be a lot of PR posturing in order to try to hold onto as much money as possible for the next fight, but it’s clear that DAZN and Alvarez aren’t 100% on the same page these days. No word on what the opt-out language might be in the contract, if there is any, but it’s worth keeping an eye on this situation from both sides. While Alvarez is likely going to push for DAZN to honor the deal as much as possible, we could see DAZN make the same kind of moves that Under Armour is making in college athletics, attempting to rework or back out of deals in order to save some cash.