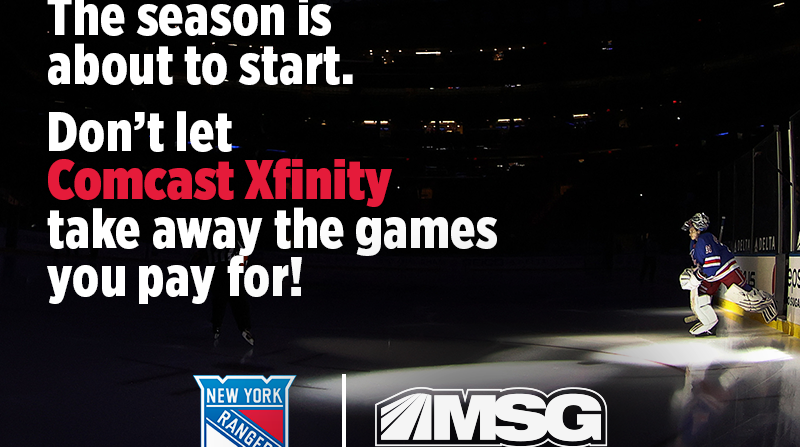 On Monday, Comcast announced a national rate increase of roughly 3%. Included in that increase is a spike in regional sports network fees that varies by market (usually, around a dollar or so).

But in the greater New York City market, Comcast customers in New Jersey and Connecticut will *not* see an increase thanks to the ongoing carriage dispute between the carrier and MSG Networks. The dispute started two months ago, and no tangible progress has been made.

In a statement, MSG took a shot at Comcast, noting that despite dropping MSG Networks, the company never bothered to decrease the regional sports fee customers were paying, instead rebating a fraction of the amount.

“Comcast said they won’t increase their RSN fee for customers who no longer receive MSG Networks. Then how do they explain keeping their customers’ money for the last two months. It’s simple: they charged more than $10 for MSG Networks, and rebated $3, which leaves more than $7 that they continue to pocket every month. Don’t be fooled: that’s a rate increase.”

This is a fair point from MSG, even though it’s clearly coming from a biased perspective. From MSG’s perspective, Comcast dropped an RSN, never cut its RSN fees to reflect that customers were receiving one fewer channel, and is now patting itself on the back for not raising RSN fees in those markets.

However, Comcast clarified that they did indeed reduce the RSN fee for the customers affected by MSG being dropped, rather than just giving a rebate.

I will note that customers in those markets also receive YES and SNY, so it’s not as if the entire RSN fee charged is covering MSG alone. Despite that, it’s still silly to drop a network, keep your fee structure the same in those markets, credit a part of that fee, and then applaud yourselves for not raising the fee. If a deal between Comcast and MSG does eventually get done, don’t be shocked if the RSN fee spikes in the New Jersey and Connecticut markets, with Comcast taking even more money from customers than it would be paying MSG.

Edited with a clarification from Comcast in respect to customer rebates and the RSN fee.