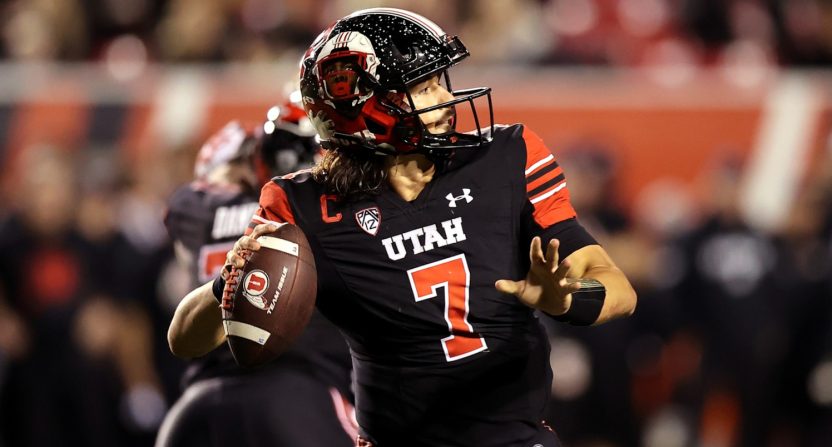 There’s often a cat-and-mouse game between coaches and “the media” when it comes to revealing information on injuries and starters. But that’s supposed to be lessened when it comes to game broadcasts. The general setup is that those broadcasts are supposed to be given as much information as possible, including in production meetings during the week and then on gameday itself. But that didn’t happen with FS1’s Utah-Washington State broadcast Thursday night.

The idea of preinformation for broadcasts is to make the actual TV presentation of a game look good. And it’s done with the understanding that the broadcasters won’t reveal any inside information ahead of the game and won’t reveal anything specifically prohibited during the game. Generally, this works fine; some coaches and programs are cagier than others, and the level of trust can also depend on the specific broadcasters involved, but even the cagiest programs tend to inform the broadcast of key moves by kickoff. On Thursday, though, FS1’s broadcast (including the booth of play-by-play voice Jeff Levering and analyst Petros Papadakis) did not find out until they were already in-game that Bryson Barnes would be playing quarterback for the Utes instead of Cam Rising (seen above in a Sept. 15 win over USC), leading to an intro focused on Rising:

This got very awkward when Barnes took the field instead of Rising:

Here’s how the broadcast handled Bryson Barnes starting in place of Rising. pic.twitter.com/1lzUe5MW4h

Prominent Pac-12 media member John Canzano explored this in a Substack post Friday, and talked to Papadakis about what went on:

“We had no idea,” Papadakis told me Friday. “They didn’t tell us. We were given every indication that Cam Rising was starting the football game.”

He learned running back Tavion Thomas didn’t make the trip.

“Anything else we need to know?” he asked in a subsequent call, just before kickoff.

“Nothing,” came the answer.

…“Even if you didn’t get a heads up in the meeting, you should get a call from the sports information director — basically, the PR department — before the game,” Papadakis said. “Just so we can run out the right kid, with the right graphics and the right celebration. And get that moment right for that young man and this moment in Utah football history, with a new starter coming out.

“None of that happened.”

As per post-game comments from Utah head coach Kyle Whittingham, the Utes were prepared for Rising to start until he said 30 minutes before kickoff that he wasn’t ready to go. So, if that’s true, this isn’t about Whittingham or offensive coordinator Andy Ludwig talking up Rising in their production meeting with FS1 the day before; that’s somewhat understandable given the information they had at the time (even if it wound up boosting this Rising-focused opening). There’s an argument the coaches could have given more of an indication that Rising might not be ready to play, especially considering that the code of the production meeting is that that wouldn’t have been leaked ahead of the broadcast, but while they weren’t necessary fully open, they also weren’t over-the-top deceptive if they themselves didn’t know Rising wouldn’t be ready.

The big actual media problem here, if this played out as Papadakis described, is with the “nothing” response from the sports information staff to Papadakis’ “Anything else we need to know?” Secrecy in general seems overrated, but at this point directly ahead of kickoff, there really seems to be nothing to gain and a lot to lose from deceiving a broadcast partner. Utah’s sports information department appears to have not passed on the very relevant information they had, and that made their broadcast partner look bad.

Granted, we don’t know the internal communications here. Perhaps Whittingham didn’t notify the sports information staffers once he learned of Rising’s status 30 minutes ahead of the game, which would put this on him rather than them. But what we do know, at least if Papadakis’ account is accurate, is that the Utah football program knew of Rising’s status 30 minutes before the game and did not inform the broadcast. And that feels unfortunate for both the broadcasters and for viewers.

It feels like there’s little to no competitive edge to be lost from a pre-kickoff notification here. As soon as the first offensive series takes place, Washington State will find out that Barnes is playing instead of Rising. If the Fox staff violated all rules of advance information and provided that information to the Cougars as soon as they got it (and, to be clear, there’s zero evidence they would have), they’d have at best given Washington State 30 minutes of warning, which doesn’t seem like enough to dramatically revise anything.

The much more plausible and common scenario here would be even a super-secretive team telling FS1 what’s up a couple of minutes ahead of the broadcast. As Canzano notes, Oklahoma State head coach Mike Gundy has done that a few times, and some others have as well. That’s still not great, and still can cause an unfortunate scramble on the broadcast end. But at the very least, it avoids opening a broadcast with a package on someone who isn’t actually playing. And the ridiculous opening here is very clearly not FS1’s fault, but rather the fault of some person or persons within Utah football who decided not to relay their starting QB to the broadcasters.