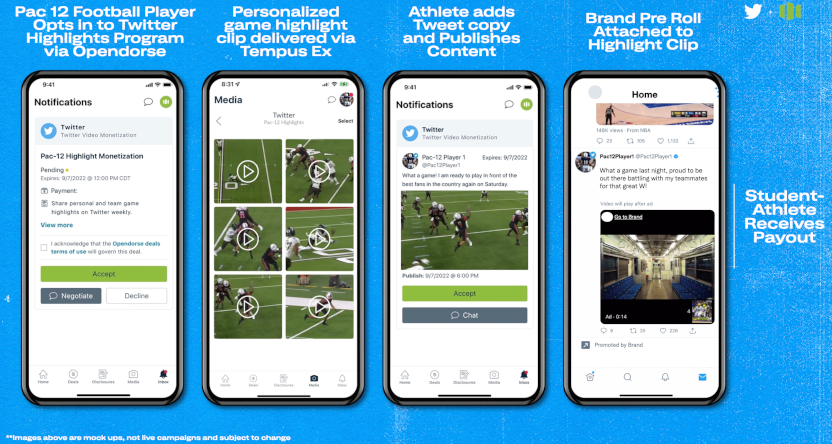 Back in early August, Twitter announced an expansion of their partnership with name, image and likeness marketplace Opendorse, which would see specific NCAA athletes (starting with Pac-12 football players) able to monetize some clips of their own highlights. Twitter senior sports partner manager David Herman recently spoke to AA on their college football efforts in general and those around audio conversation tool Spaces in particular. As part of that conversation, Herman also answered some questions around the Opendorse highlights partnership. To start with, Herman said this was an important step for Twitter in the overall context of their goal of supporting student-athletes.

“We felt this was really important to be in the space, and to show that we’re in the business of supporting student-athletes. Last year, we launched our inaugural program with Opendorse and the Pac-12. The intention of that agreement was to really take the best of sports on Twitter, real-time highlights; whether you’re watching the game or not watching the game, the highlights in the moment, coming in real time, are fantastic. The Pac-12 program that we’re doing will allow them to share their best moments after they come off the field.”

He said this feels particularly notable considering how the pre-NIL era saw athletes get in trouble for even using their name in non-athletic endeavors. There have been many examples of that; for one, Marshall offensive lineman Will Ulmer had to book country music gigs under an alias pre-NIL, then was able to shift to using his own name in the new era. Herman said it feels special for Twitter to do something that lets these athletes actually monetize some of the highlights they produce on the field.

“It’s a such a cool thing to be able to say, after all those years of student-athletes not even being able to use their name, image and likeness, but not even the likeness of the team itself in their own benefit. And we’re super pumped about it. And kudos to the Pac-12 for allowing their rights to be used in this way and our partners at Opendorse and Tempus Ex who are all making this deal come to life. We’re stoked about it.”

As referenced there, the highlight clips in question aren’t from the conventional game broadcasts. They’re from Tempus Ex Machina, a company the Pac-12 signed “the first-ever, all-encompassing data technology partnership in collegiate athletics” with this March. And they’re often not the standard overall high broadcast angles, but rather angles focused on individual players. Here are some examples of highlight tweets under this partnership, from USC DB Adonis Otey, Oregon State WR Anthony Gould, and Oregon LB Anthony Jones:

Some of these clips then can be promoted by brands Twitter has advertising deals with. An example of that comes from an Oct. 2 tweet from USC long snapper Jac Casasante, which highlighted by Comcast’s Xfinity. That particular clip has now been viewed more than 57,000 times. Here are screengrabs showing what the Xfinity promotion (and accompanying pre-roll ad) looked like: 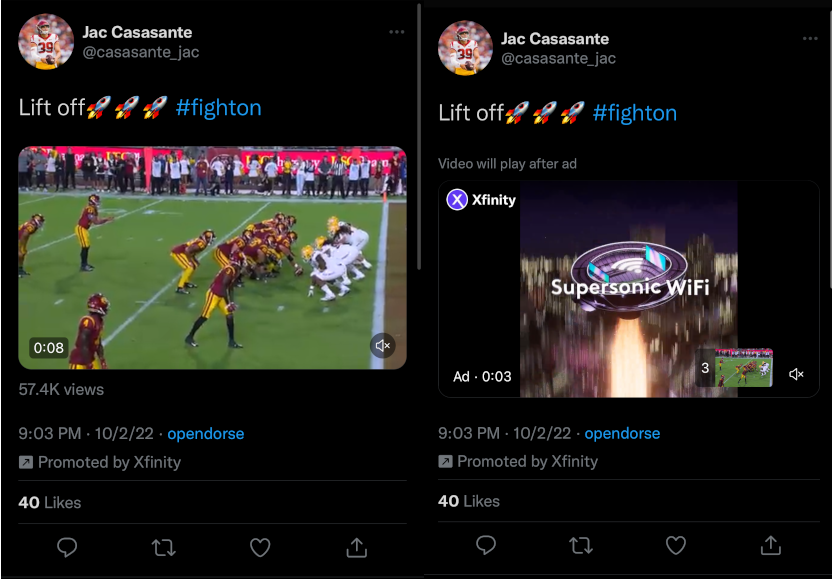 Herman said this partnership is stepping into new territory, and it will see some evolution as time goes on.

“It’s a first for us, it’s a first in many ways. I think it’s going to be a lot of learning as we go. We’re excited for the use case, and excited to see how potentially that content helps continue the conversation of college football a few days longer; a game Saturday, student-athletes posting their content Sunday or Monday, does that help us keep the conversation rolling throughout the week and looking ahead to the next?”

Herman said it’s also helpful that Twitter is already a platform many of these athletes are using, and they think this partnership can help those athletes find more value in Twitter. He said a key distinction for Twitter is the way content on the platform can spread from people engaging with it.

“There are so many platforms and so many ways to produce content now. It’s not about forcing a use case, but more about showcasing the value. Twitter is the place where people go to talk, not just look at something. And the benefit of going somewhere and producing content for our platform as a conversation is how that conversation, that talk can spread so quickly.”

“It’s for the world at large. When we talk to student-athletes, or anyone for that matter using Twitter, it’s about honing in on that real benefit. Twitter’s your microphone; let the world know what you’re thinking, what you care about, what you want to say. And then let the world take the conversation from there. Obviously, there can be positives and negatives to that, as we all know.”

“But specifically for student-athletes, we’re excited about the opportunity for them to be able to use Twitter to show their personalities and let their fans, and if they’re hoping to go into professional sports after college, their future employers in the sports world, know what they’re about. And if they’re not planning to go into professional sports, also let their future employers know what they’re about and how they build their brand. Because at the end of the day, building a brand is a business, and if they’re effectively building a business, they’re going to have great opportunities regardless of if they’re playing sports or not playing sports after their time in school.”

The eventual hope is to take this partnership beyond just Pac-12 football. Herman said there are several things they’ll need to see first, though.

“One, as the rights landscape is still evolving in all conferences, there’s an element of ‘What do the rights look like for each conference?’ Two, I think we want to see what advertiser interest in these types of programs looks like, how much value there is to the student-athletes. And then three, going back to the point I made earlier, evaluating what it’s doing to the conversation at large. Are we getting more people to talk about college football? Is this not having a material impact? It’s about understanding where is the value.”

But he said he’s optimistic something here will work, and the hope is to use what they learn to eventually create a solution that can be easy to apply to other conferences and other sports.

“And there’s going to be value somewhere there, it’s just a matter of pinpointing what is the most valuable, not only for us but for the student-athletes. Where does this work? Is it going to be better going into a game, or coming out of a game? Is it better to do the Sunday or Monday, or to save that highlight and tweet it out Friday before their next game? There’s all sorts of little nuances there that I think we’ll learn. We want to see all those three buckets, how they work together, evaluate from there and hope to be able to bring a robust turnkey offering not just for Pac-12 football, but for sports across the board.”