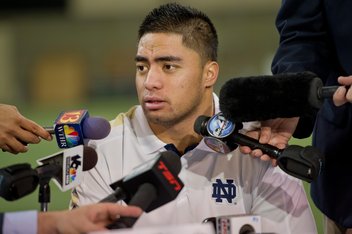 Last week Kyle Kensing wrote a retrospective on the ten year anniversary of one of sports broadcasting’s first controversies of the viral era, Brent Musburger’s infatuation with Katherine Webb. Amazingly, another major sports media moment happened just days later – Deadspin shocked the world when it broke the news of Manti Teo’s girlfriend who never existed. The ramifications of the online outlet’s story are still felt today on its ten year anniversary.

The headline of college football’s most explosive story in 2013 is itself a reflection of a shifting media landscape.

“Manti Te’o’s Dead Girlfriend, The Most Heartbreaking And Inspirational Story Of The College Football Season, Is A Hoax,” it reads atop the Deadspin dive into the catfishing saga of the Notre Dame linebacker and 2012 Heisman Trophy runner-up. This full-sentence headline is a departure from the choppy, conjunction-free style born of print limitations in generations prior.

The expose itself, however, remains one of the most enduring examples of true journalism published in the 21st Century — so much so, the 2022 Netflix documentary Untold: The Girlfriend Who Didn’t Exist focuses extensively on Timothy Burke and Jack Dickey’s reporting process for the Deadspin expose.

Their work marked a pivotal milestone in establishing the original incarnation of Deadspin as a serious sports journalism entity and not a hive of accountability-free slander and snark as Buzz Bissinger charged in a heated 2008 HBO appearance with Deadspin founder Will Leitch.

Nor could Deadspin and digital media at large be written off as retreads of Colonial-era “pamphleteers” as the later-disgraced Philadelphia columnist Bill Conlin suggested.

In retrospect, it stands to reason a digitally native outlet broke the story of a wholly online phenomenon. The concept of “catfishing” would have been completely foreign to earlier generations that came up without the first incarnations of social media.

As a Jan. 18, 2013 Chicago Tribune column puts it: “Whatever else comes of it, the Te’o story will be remembered for bringing catfish, the verb, into the mainstream.”

A decade later, that assessment is vindicated. Perhaps because of that unfamiliarity at the time, the ensuing backlash that followed Deadspin’s Jan. 16, 2013 report seemed to still miss the mark on what exactly catfishing entailed.

In his Daily News column on Jan. 20, 2013, Mike Lupica — one of the heavyweights of the media Old Guard in this transformational period — drew parallels to Lance Armstrong, the cycling champion who that same week appeared in an interview with Oprah Winfrey to admit to using performance enhancing substances. 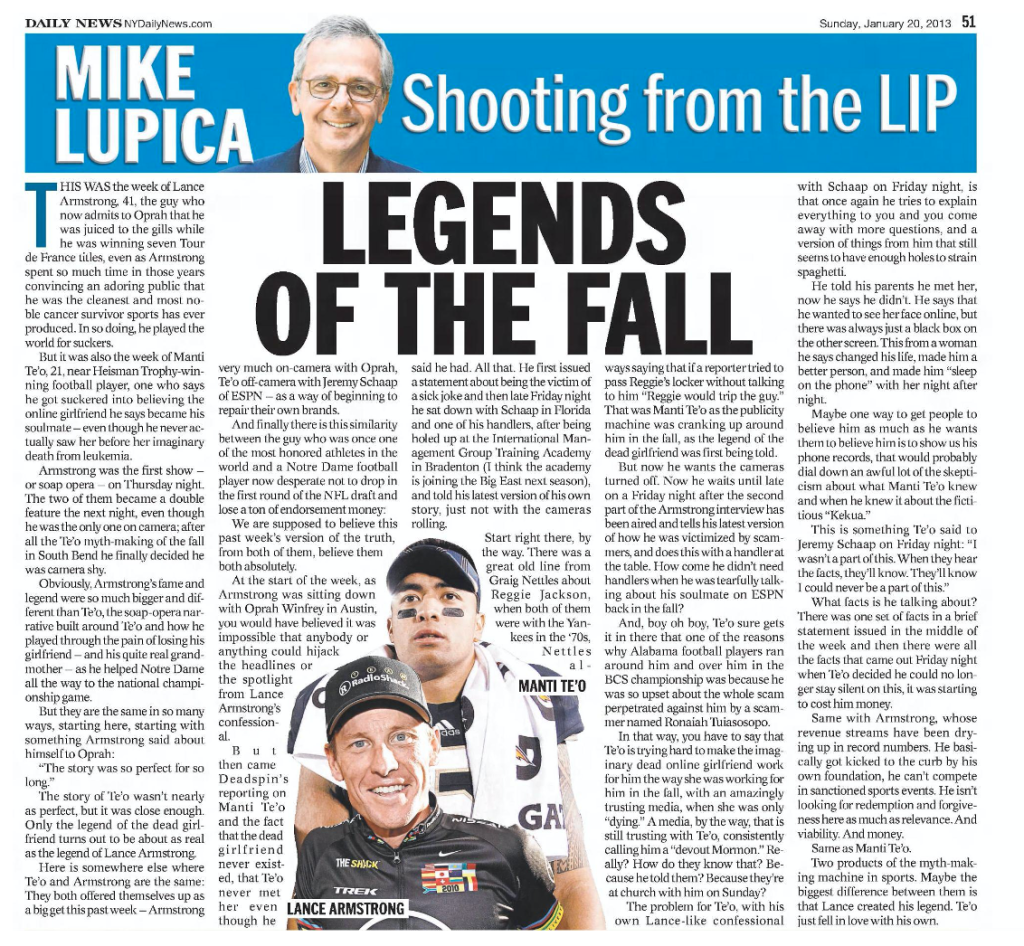 I’ll hazard a guess that in January 2013, Mike Lupica was never pinged from an AOL Instant Messenger account he’d never interacted with before, and certainly wasn’t navigating Facebook in the days when registration required a .edu email address. Thus, the comparison between a college kid who may have been duped online to a cyclist who was accused of trying to destroy his critics behind the scenes.

“Is An ESPN Columnist Scamming People on the Internet?” by John Koblin is a wild ride for the uninitiated, and a telling reflection of the capacity for catfishing to dupe the unsuspecting.

The answer to the question How could Manti Te’o not know Lennay wasn’t real? seems to be the same as How could ESPN hire a columnist who didn’t exist (at least, in the capacity she was presented)?: Pretty damn easily.

Coincidentally, the Phillips series ran in May 2012 — the same month as the heinous murder of college student Jun Lin in Montreal, a tragedy woven into another instance of online duplicity. Another Netflix docuseries, Don’t F**k with Cats, examines how internet chatters tracked the movement of murderer Luka Magnotta, who created a bizarre and fictitious reality with hundreds of fake profiles online.

As for Deadspin and the Phillips saga, sports-media drama and gambling were niche topics; the Te’o expose signified a truly mainstream landmark for digital media becoming the industry standard.

Meanwhile, in a sign that the landscape is ever evolving still today, Deadspin in 2023 is a shell of what the publication was in 2013.