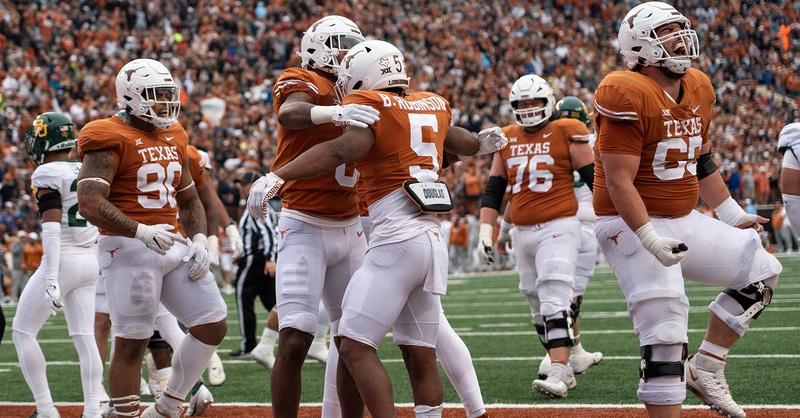 Ever since the 2021 news that the Texas Longhorns and Oklahoma Sooners were headed to the SEC, there’s been a lot of discussion about the timeframe of that move. The official statements have all been about that move happening in 2025-26, but there have been many  suggestions that it may come sooner. And on Friday, Stewart Mandel, Max Olson and Andy Staples of The Athletic added to that with a report that a move from Oklahoma and Texas (seen above celebrating a Nov. 25, 2022 win over Baylor) ahead of the 2024-25 season is now “likely”:

Something changed at a Big 12 meeting in Vegas last week, and now multiple sources tell ⁦@TheAthletic⁩ they expect they’ll reach an agreement to leave early. https://t.co/1eHhYkwkI2

A few key quotes from that report:

Big 12 officials held a meeting last week in Las Vegas, and in the portion of the meeting in which Texas athletic director Chris Del Conte and Oklahoma athletic director Joe Castiglione were recused because officials were discussing future business, “momentum” emerged for an early exit, according to an administrator within the SEC. An administrator within the Big 12 confirmed that the tone in the league regarding this topic shifted following that meeting.

“They’re definitely engaged on it and moving towards something where they will leave after next season,” a Big 12 school official said.

“It’s likely they are leaving early,” said a person with knowledge of the discussions.

It’s worth noting, however, that that piece mentions that the current Big 12 bylaws requiring 18-month notice of an exit has to be handed in by Dec. 31, 2022 to take effect ahead of the 2024-25 football season. So there is a deadline. But, as with everything here, that deadline is likely negotiable. And earlier this week, Brett McMurphy of The Action Network reported on “momentum” here:

There is “growing sentiment” and “momentum” for Oklahoma and Texas to leave the Big 12 a year early and join the SEC in 2024, industry sources told Action Network.

The Big 12’s current Grant of Rights expires July 1, 2025. Oklahoma and Texas have indicated they are committed to remaining in the Big 12 until then before moving to the SEC for the 2025 season. However, that timetable has since been accelerated and could even get completed by next month, sources said.

There remain many obstacles for an early move, but one source said the “climate is right” for the Sooners and Longhorns to exit the Big 12 after the 2023 season and begin play in the SEC in 2024.

“There’s a lot of moving parts, but there is the desire on many fronts for this to get done,” an industry source said.

There are plenty of challenges to this. One is Texas and Oklahoma having to pay for their exit in years where they still have a grant-of-rights to the Big 12. Another is the downside for Fox from this move; there have been reports on that front suggesting Fox is actually blocking it and requiring further concessions, but the only logical discussion there is about possible edges for Fox in the next Big 12 deal (which will see the conference again shared between them and ESPN). So these reports are far from firm assurances that Oklahoma and Texas will play in the SEC in 2024. But they add to the discussion about that happening that year, rather than ahead of the 2025-26 football season as initially stated.

[The Athletic; photo from The Austin American-Statesman, via USA Today Sports]