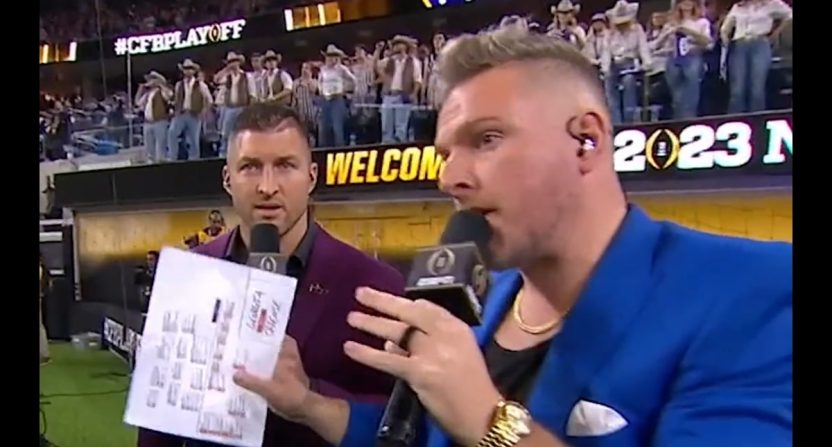 After Pat McAfee freewheeled on TV for 11 hours, no one is stunned to learn he’s now bracing for a phone call from the FCC about his national championship coverage on ESPN2.

Over the course of McAfee’s long day for ESPN, the popular podcast host and former NFL punter may have let some controversial words, phrases and innuendos fly on ESPN2. The biggest cause for McAfee’s concern, however, might be a bit more surprising, as he braces for a fine after letting the Happy Birthday song slip out of his mouth.

“Happy Birthday, I’ve heard, will be expensive,” he said Tuesday on The Pat McAfee Show while addressing the backlash to his national championship alternate cast.

It may be expensive, but McAfee couldn’t resist singing Happy Birthday to Tim Tebow. No, it wasn’t Tebow’s birthday, but it was the best way for McAfee to honor the former quarterback’s induction into the College Football Hall of Fame.

“This is his birthday for the Hall of Fame day, so we have to sing Happy Birthday,” McAfee said. “Darius Butler…riding on the plane afterward said, ‘while we were singing I thought for sure we were doing it on purpose just because we’re not supposed to do it.’

You think you're bored with Georgia-TCU? Here's what the Field Pass is up to… pic.twitter.com/L2t24QpUo4

“I didn’t think of that,” McAfee said. “My first thought is Tim, it’s the first day of the rest of your life…if we end up in FCC court or whatever the f*ck we’re gonna be for singing Happy Birthday I’ll take their fine. I hope there will be a human on the other side that has some sort of self-awareness that understands, it’s Tim Tebow.”

The Pat McAfee Show then flashed a headline from an ABC News article that stated singing Happy Birthday can cost up to $30,000 in fines for copyright infringement. That article, however, was from 2008. The Happy Birthday song has since been deemed public domain, with music publisher Warner/Chappell paying $14 million in 2016 to end a copyright lawsuit.

McAfee can take a sigh of relief in knowing he avoided any serious wrongdoing by singing Happy Birthday to Tebow and should escape any potential copyright battle. But if you told me Pat McAfee was going to spend 11 hours on TV for CFP national championship coverage, I definitely would have taken the over on there only being one potential complaint or phone call from the FCC.