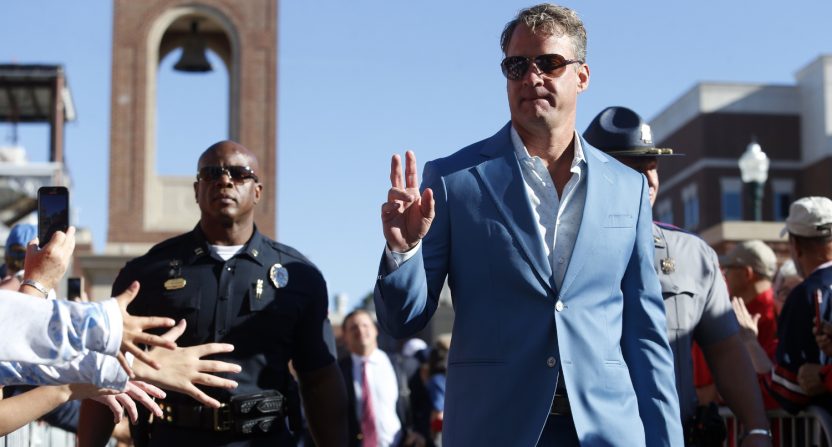 The college football world is known for plenty of anonymously-sourced reports on coaching moves, with some eventually coming true but many never paying off. There’s often pushback on those reports, but it’s frequently from other anonymous sources, or maybe athletic department spokespeople, or in rare cases, coaches themselves at press conferences. What’s really unusual is when a coach directly opposes a report on their own Twitter account, but that’s what Ole Miss Rebels coach Lane Kiffin did Monday night and Tuesday morning.

Kiffin‘s comments and memes here came in response to a very specific report from Jon Sokoloff (sports director of Columbus, Mississippi CBS affiliate WCBI) that Kiffin was planning to step down Friday and take the Auburn Tigers‘ job. That Twitter report carried the language of “Lane to Auburn is happening.” The website version included denials from other Ole Miss sources, though:

Sources say Ole Miss head coach Lane Kiffin is planning to step down Friday and become the next head coach of Auburn. Moments ago, sources in the Ole Miss athletic department denied that report. Sources close to Auburn say they have not offered the head coaching position to anyone at this time.

But beyond the anonymous source denials, this has been particularly and vociferously opposed by Kiffin (seen above ahead of an Oct. 1 game) himself on Twitter. He started his denial with “That’s news to me Jon,” a facepalm emoji, a “Nice sources,” and several further emojis.

Kiffin then escalated with his own “report” (obviously satire) that Sokoloff was going to take a job at ABC/CBS affiliate WLOX in Biloxi. (The move to type this, print it, and photograph it rather than just tweeting it really adds to it.)

That drew a funny response from WLOX’s Hugh Keaton, and Kiffin commented on that too:

Kiffin then retweeted a (Flash/Green Arrow) meme with a gravestone for Sokoloff’s career:

Kiffin also posted a photo of him reading up on the Egg Bowl rivalry (Ole Miss plays Mississippi State in that game Thursday);

There is, of course, a chance that Sokoloff could still be right. We’re not at Friday yet. And Kiffin has been known for quick exits from some previous jobs, sometimes shortly after stating interest in staying. And if Sokoloff is right and Kiffin does leave Ole Miss for Auburn Friday, Kiffin’s responses here will look rather silly in retrospect. (If this move does happen, but at a later point, Sokoloff’s still going to be mostly wrong thanks to the specific timing his report insisted on; he might get some partial credit for predicting the outcome, though.)

But if Sokoloff is wrong, there’s some appeal to this strategy of a coach directly denying a report this way. Especially a report that went in this hard and this specifically. Most coaching rumor reports are far more couched with “interest,” “talks,” and other qualifiers, and very few give this kind of specific timeline. Sokoloff’s specificity here made it seem like he was particularly plugged in to something.

If Sokoloff was correct on that report, he’ll get plenty of credit for it. And being proven right would make this mockery by Kiffin will be a distant memory. But the strength he put behind this report certainly made it worth Kiffin’s while to deny it if it’s not true. And it’s somewhat refreshing to see a denial directly and publicly from a coach himself rather than through a PR department or anonymous sources.

That, of course, can backfire as well, as a certain football coach turned senator who insisted he would only leave Ole Miss in a pine box (before taking the Auburn job a few days later) is well aware. And if it does, there will be lots of roasting of Kiffin. Either way, Kiffin’s direct response here has raised the stakes; either he or Sokoloff is going to be proven inaccurate shortly, and the world’s going to be watching for who that will be.