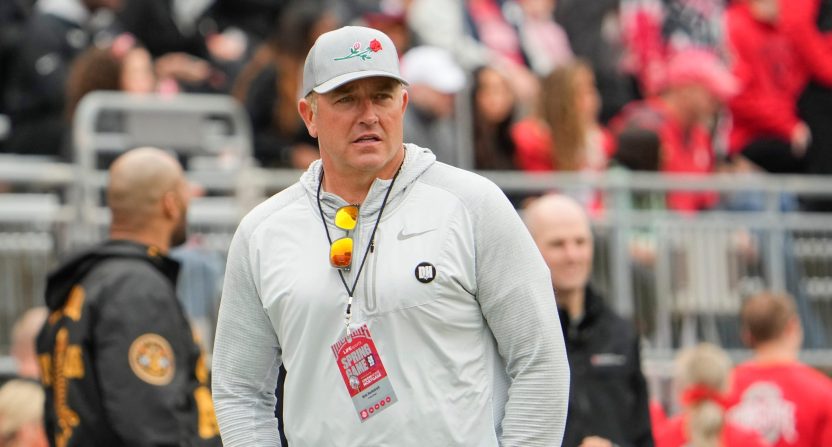 There’s nothing wrong with a little friendly banter between rivals, especially when it’s between two powerhouse college football programs like Georgia and Ohio State. However, it doesn’t seem like ESPN and Amazon broadcaster Kirk Herbstreit appreciated being the butt of a joke by Will Muschamp during the buildup to the 2022 Peach Bowl.

During a press conference Tuesday, Muschamp, who is Georgia’s co-defensive coordinator, was asked about the 1993 Citrus Bowl, in which the Bulldogs and Buckeyes met for the first and only time so far. The former South Carolina head coach played safety for Georgia and he was getting ready to face Herbstreit, who was Ohio State’s quarterback.

Muschamp recalled how he saw Herbstreit throwing a football at a luncheon before the bowl game and immediately knew that the Bulldogs could win.

Georgia co-defensive coordinator and former Bulldogs safety Will Muschamp joked that he saw Kirk Herbstreit throw a pass at a luncheon at the 1993 Citrus Bowl and "knew we had a shot to win." pic.twitter.com/56eFGc57dz

“We had a…luncheon. And Herbstreit got up and threw a pass across the room. I knew we had a shot to win,” said Muschamp. “Make sure he knows I said that.”

Muschamp was right as the Bulldogs won the game, 21-14. Herbstreit finished the day 8 of 24 for 110 yards with zero scores and one interception.

Herbstreit had a press conference of his own on Tuesday to discuss the College Football Playoff and Rose Bowl, both of which he’ll be calling. Naturally, he was asked about Muschamp’s playful joke and was offered the chance to throw a fun dig back in his direction.

“I do remember it was one of those autographed balls, those white panel balls, and I remember throwing it and not being real happy with how far I had to throw it because I couldn’t grip the ball. So, I shotputted the ball. That’s about all I remember. But no, I don’t really have any comments or any reaction at all to what Will said.”

Herbie was given a second chance to come up with a juicy comeback that could keep the banter going. And this time, he really shut it down.

“Are you sure you don’t have a little comebacker against Muschamp? a reporter asked.

When asked if he remembered anything that Muschamp might have done that day, the co-winner of our Best Color Commentator of 2022 award still didn’t seem interested in taking the bait.

Herby..
"….I don't remember much about Will."? pic.twitter.com/AZYZZWHqCz

“I don’t even remember, man. Was that 100 years ago?” asked Herbstreit. “I remember when I played in the early ’90s, and I would think back to my dad played, he was a captain in 1960, when I was that age, my dad would talk about playing. I felt like he was talking about 1860, and now I’m that guy. I’m that guy. So, I just remember Georgia being really good and very athletic, and I don’t remember much about Will at all.”

According to the official box score, Muschamp had one total tackle on the day, so, in that respect, Kirk’s lack of any memory about him is totally understandable. Just, you know, not that funny.