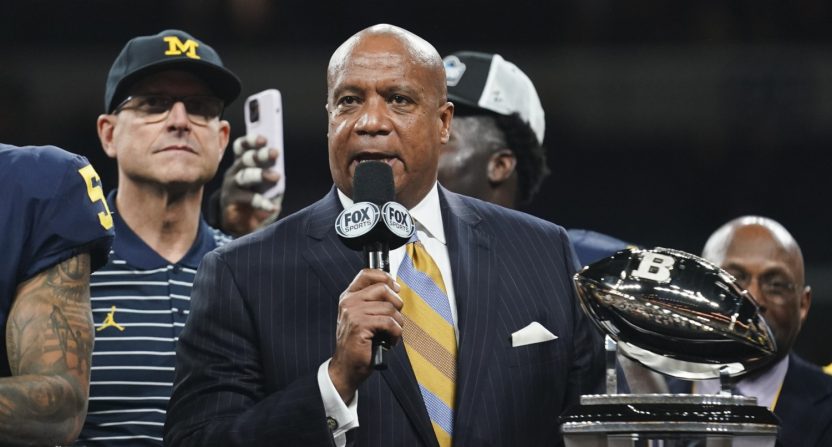 Thursday’s report from ESPN’s Pete Thamel that Big Ten commissioner Kevin Warren has interviewed for the role of next president and CEO of the Chicago Bears has plenty of potential implications for the conference. While Thamel’s report dubbed Warren a “top candidate,” it’s far from clear yet if he will actually get that job, especially with the conference itself putting out a statement describing this as just a “request for expertise”:

" … sports ownership groups to private equity firms. The Commissioner utilizes each occurrence to listen, learn and assist every stakeholder in the most appropriate and effective manner. The Commissioner remains focused on the Big Ten Conference …

” … its 14 member institutions and over 10,000 student-athletes in both regular season and postseason play.”

This could wind up being more than that “request for expertise,” though. And if Warren (seen above presenting the conference championship trophy to Jim Harbaugh and the Michigan Wolverines on Dec. 4) does wind up taking that Bears‘ job, there could be a lot of impacts on the Big Ten and on college football as a whole from a change in Big Ten leadership. Here are five aspects of the Big Ten commissioner job that will be notable over the next few years, whether it’s still Warren in that role or someone else.

1. Expansion: One of the biggest questions about the future of the college conference setup is if the current Power Two of the Big Ten and the SEC will expand further. There’s been lots of smoke around that with the Big Ten in particular, from a “continued pursuit” of four further Pac-12 schools (Cal, Oregon, Stanford and Washington) to escalators in the media deals (but, reportedly, only spelled-out ones for Notre Dame). And conference expansion and realignment feels like one of the most important parts of a conference commissioner’s job these days; it’s certainly not all about them, with significant roles played by school presidents and athletic directors, other conference officials, and media executives as well, but the figure at the top of the conference matters.

On that front, it’s notable that Warren (whose background is mostly as a NFL executive) has been perhaps blunter and more aggressive with remarks about expansion than many career college officials (albeit not as much as fellow out-of-the-box hires George Kliavkoff and Brett Yormark, of the Pac-12 and Big 12 respectively). That doesn’t necessarily mean anything; quieter college lifers have pulled off big moves of their own, including preceding Big Ten commissioner Jim Delany and past and present SEC commissioners Mike Slive and Greg Sankey. But if Warren does wind up moving on, it will be interesting to see the stance of his replacement vis-à-vis public discussion of expansion.

2. Media rights: Yes, the Big Ten has its media deals done through 2029-30, but there could be change there. Even if neither Notre Dame nor the four listed Pac-12 targets winds up joining the Big Ten, other expansion might be possible. Even if there’s no further expansion, there are also possibilities for change with further carveouts from what’s on the Big Ten Network and associated streaming option B1G+ (with Sportradar). With the Pac-12 targets in particular, there’s been discussion of an additional BTN-level package sold to another media company if that expansion happens, and while that’s not a sure thing even if that expansion happens, some lesser version of it could perhaps go through even without expansion.

There are some outside factors to consider there, especially with Fox owning 61 percent of BTN these days, and with Sportradar having that B1G+ partnership; the conference likely can’t unilaterally remove inventory from those partners. But the Big Ten does still have more of a stake in their “league network” than, say, the SEC or ACC (which have sold those full rights to ESPN for those ESPN-operated league networks), and that maybe gives them some more flexibility on content currently slated to go there. And a new commissioner might have some decisions to make on those fronts.

3. Compensation for players: From the outside, there don’t appear to be a whole lot of great reasons to leave the Big Ten commissioner job (and accompanying listings in things like Sports Business Journal‘s 50 Most Influential) to be the president and CEO of one NFL team (a role not usually featured on those lists). The Bears do have a big market and a lot of franchise value, and they do perhaps present an interesting challenge around their stadium discussions. And one of the moves Warren was most known for in the NFL was his work on getting the Vikings’ U.S. Bank Stadium deal done, so he’s a logical target for the organization on that front. But from a ways off, the disadvantages of that role seem higher than the disadvantages of being Big Ten commissioner (especially after clearing the hardest hurdle of media deals, and doing so in a way that has generally been viewed favorably). And yes, Warren faced opposition early on, especially around the decision to initially postpone the 2020 football season around the COVID-19 pandemic, but the current sentiment on him seems relatively positive.

But there is one absolute and rising disadvantage of working in college sports in general and the Big Ten in particular. That’s the tough discussions ahead around player compensation. Beyond NIL challenges, there’s a growing movement for schools and/or conferences to directly pay players. And Big Ten players and coaches have been key parts of that conversation. That is a massively thorny issue to dive into, and that’s part of why Warren’s been pretty noncommittal (but seemingly open) in remarks about it so far. And any Big Ten commissioner, whether Warren or someone else, will have to figure out what to do there.

4. Playoff scheduling: After much ado, the College Football Playoff is indeed expanding beginning in 2024. But there are a lot of discussions still to come on the specific scheduling of that, particularly in reference to the NFL. And whoever the Big Ten commissioner is will have a significant voice in that conversation. Warren has not appeared to have a particularly notable public stance on that to date, but it’s an easy bet that Big Ten leadership will be heavily involved in what winds up being decided.

5. Setting up for the next media deal: As mentioned above, the Big Ten’s media deal is done, and the revenue there is largely fixed through 2029-30 (barring further expansion/realignment/package carveouts). But the conference cannot rest on its laurels, especially around the relatively-new label of a “Power Two” with the SEC. There will be constant pressure on the Big Ten to compete with the SEC for “top conference” status, whether on the football field (or in other sports, but football remains the main driver here) or in per-school distributions, and on it to continue to pull away from the rest of the Power Five and the Group of Five. And conference leadership plays a role there.

There are maybe less obvious things to address here once the media deal is done, but there’s still a lot of work for the Big Ten to do in maintaining their current status. And playoff expansion has pros and cons here. More Big Ten teams are now likely to hit the postseason each year, but the conference was getting a high share of playoff participants in a four-team field; that may decrease in a 12-team field, and if their teams don’t perform well there, there may be questions about the conference’s presumed strength) And any commissioner, whether Warren or someone else, will have to publicly stand up for the conference’s strength, lobby for its teams, and try and position it for favorable media deals in the next round. That next round is a long way off, but the work in preparing for it is already underway. And whoever leads the Big Ten will have to spend time thinking about that and dealing with it.