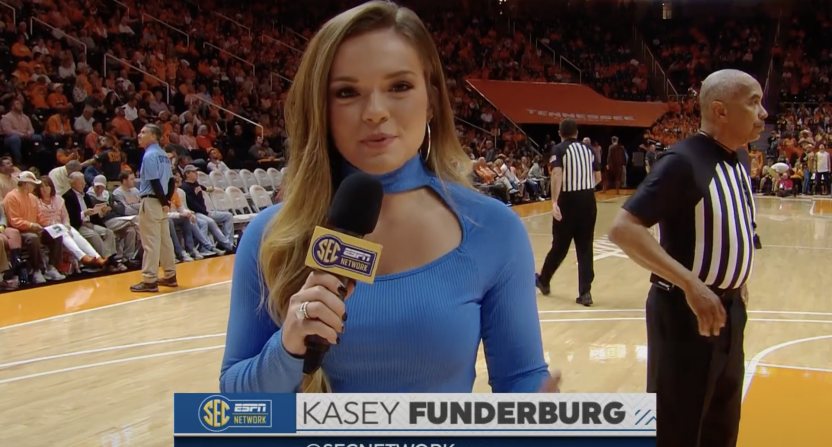 Last week, University of Tennessee sports reporter and Vol Network sideline reporter Kasey Funderburg left the school while conflicting reports swirled about whether or not she had been fired or resigned over old tweets. Wednesday, she clarified some details and apologized for the content of those tweets.

Last Thursday, Outkick reported that Funderburg was “fired after tweets showing her writing racist slurs were discovered.” However, Knox News reported on Saturday that, per a Tennessee athletic department spokesperson, she had resigned on Thursday.

While the school did not provide a reason for her departure, Funderburg seemed to confirm that it was related to the tweets with an apology posted on her Twitter account Wednesday.

“The comments I tweeted as a high school student were unacceptable and ignorant,” read the statement. “I sincerely apologize for using offensive language and to anyone I hurt or offended with those remarks. I take full responsibility for my actions. This language is not appropriate in any context and has not been part of my vocabulary since then.

“At the University of Tennessee, I worked in the athletic department and joined the University’s Diversity and Inclusion group which afforded me the opportunity to learn additional valuable lessons about the viewpoints of people from different races, cultures, and countries, as well as the strength that such diversity provides.

Moving forward, I will continue my work to be a better ally so that I may promote a more inclusive society where everyone is welcome.”

The irony of Funderburg’s job ending over the old tweets is that they came to light after she called out another Twitter account about its racist joke, saying “it’s disgusting that this person thinks putting out a joke like this is okay.” It appears that her old tweets, which included the n-word, resurfaced in retaliation for those comments.

In addition to working as a sideline reporter, the 26-year-old UT graduate had also served as an on-air host for VFL Films and weekly coaches call-in show “Vol Calls.”