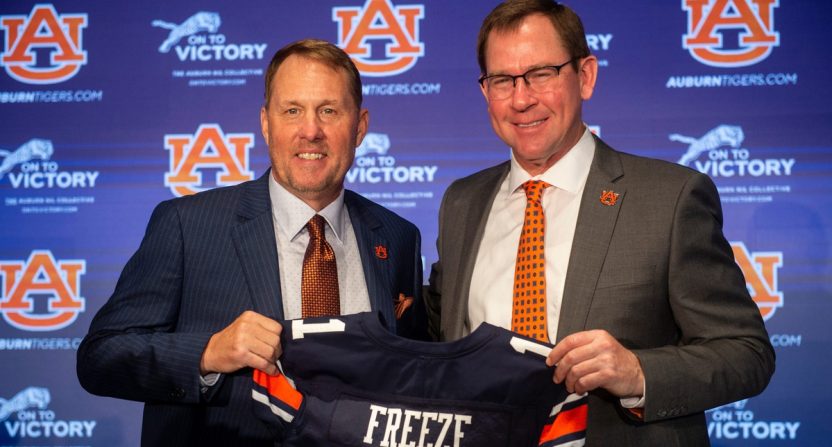 One strange dimension of the many around the Auburn Tigers‘ hiring of Hugh Freeze is the discussion of his social media accounts. That discussion involves many levels, but it’s perhaps especially notable for the unsolicited and critical Twitter direct messages he sent a sexual assault survivor who was blasting Liberty‘s athletic department (and AD Ian McCaw) this July. It also touches on the saga of him using a school phone to communicate with an escort service while at Ole Miss, and the NCAA violations that program racked up under Freeze. And on Monday night, around the hiring of Freeze, Sports Illustrated‘s Pat Forde reported that “Multiple sources say Freeze has agreed to relinquish control of his social media accounts when he becomes the Auburn coach.” That drew a lot of comment:

This is the first time I have heard of this being in a coach's contract.

Auburn trusting Hugh Freeze with their football program but not his Twitter account is peak CFB. pic.twitter.com/gaNHQ7t9tB

In an introductory press conference Tuesday, though, Freeze (seen at left above at that press conference with Auburn AD John Cohen) denied that report. But he did indicate that he hasn’t been on social media in “three to four weeks”, and that someone else has been posting the tweets, retweets, and other posts from his accounts during that time. And he even said “there may be wisdom in” giving up control of social media. Tom Green has more on that in an AL.com piece:

“That’s not accurate,” Freeze said of the Sports Illustrated report. “I mean, how could you in this day and time?”

While denying the report, Freeze admitted there “may be wisdom in” the notion of ceding control of his accounts and staying off social media.

…Freeze said he was also unaware of “the magnitude of backlash” that his hiring generated online.

“Believe it or not, I really just haven’t been on any social media the last three or four weeks,” Freeze said. “I have an account, but somebody else has been running it.”

This winds up in an interesting level of dispute, as there are potential layers on which this report may or may not be accurate. (It’s a lot more subtle and nuanced than Jon Sokoloff‘s “Lane Kiffin is planning to step down Friday and become the next head coach of Auburn” and “Lane to Auburn is happening,” and as such, we’re unlikely to see as full of a reversal.) It’s notable that Forde’s actual language was “Freeze has agreed to relinquish control of his social media accounts when he becomes the Auburn coach,” and there are still ways that can somewhat work.

While many assumed Forde’s report indicated “No tweeting or posting” was spelled out in Freeze’s contract, the letter of that report is looser. It only says he’s “agreed to relinquish control of his social media accounts when he becomes the Auburn coach,” and doesn’t explicitly state that’s in his written contract (so it could be from a separate verbal discussion). The “contractually obliged” comment is separate, and comes from a “source with Auburn ties,” but not necessarily an Auburn employee, so not necessarily someone with knowledge of that contract.

And from Freeze’s comments Tuesday, it’s clear he already did turn the day-to-day operation of his social media accounts over to someone else. Whether that was someone at Liberty or someone who works for him personally is unknown. But in the latter case, that person might continue in that role. In the former case, someone at Auburn may take it on. In either case, that’s giving someone else the ability to post on his behalf.

Of course, that’s not necessarily “agreed to relinquish control.” Freeze’s comments make it sound like he still has access to the accounts, even if he’s not the one posting from them much of the time. And if that is true, that would mean Forde’s report is at least somewhat inaccurate. But it is clear that Freeze has had other people running these accounts, and that he doesn’t seem too opposed to the idea of handing them over on some level, saying there “may be wisdom in” that.

If Freeze’s comments are true, Forde perhaps overstated what was going on here. That may include overstating how much of that was pushed by Auburn: if Freeze had already done some of this a month ago, that’s not really about the Tigers. And if Freeze is correct and Forde is not, that’s not a great look for Forde and SI. And if Forde’s report was overstated, it makes sense for Freeze to push back on it; the idea of a coach fully banned from his own social media accounts is rather absurd, and would certainly be used against Freeze in recruiting and other areas.

But the initial report here was very limited in what it did specifically say. It’s not the fault of Forde or SI that other people jumped on that and added terms like “in the contract” that weren’t in the initial report. And it sounds like Forde did correctly hit on Freeze handing over social media controls on some level in the past, and on some of his willingness to do so going forward, which explains why this pushback was very different tonally from Kiffin’s on Sokoloff. If Freeze’s comments are correct, Forde and SI will deserve some criticism, but nowhere near the level they would get for a definitive report that wound up completely proven wrong.

What will be interesting to watch is if anything further comes of this. As mentioned, the actual dispute here is much smaller and grayer than the Sokoloff-Kiffin dustup. And it’s quite possible Freeze leaves this at what he said Tuesday, and Forde and SI don’t offer any further defenses of or doubling down on their reporting. But if Forde does produce a response to Freeze, perhaps with further proof that “Freeze has agreed to relinquish control of his social media accounts when he becomes the Auburn coach,” and further discussion of what that specifically means, this could get bigger. Freeze’s honesty is certainly a reasonable point of discussion given his history, and if it does wind up in question from this, that will be well worth keeping an eye on.