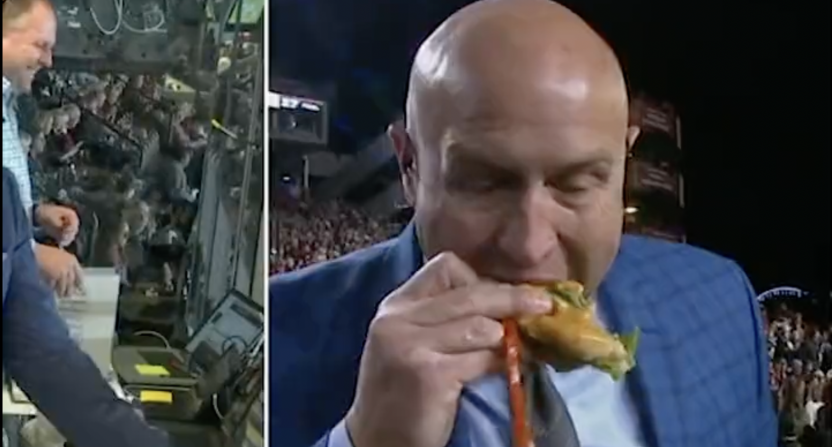 Have you been noticing a growing trend where college football broadcasters become part of the game broadcast at the expense of game action? Greg McElroy certainly has and he’s not happy about it, especially when he has to watch his radio co-host choke down a donut burger on live television.

During Saturday night’s game between the Texas A&M Aggies and South Carolina Gamecocks, the SEC Network broadcast crew of  Jordan Rodgers and Tom Hart were marveling at the size of some South Carolina State Fair corndogs and later got the chance to sample them directly. While they tried to fit those foot-longs in their mouths, sideline reporter Cole Cubelic was seen absolutely devouring a “donut burger” in what seemed to be a race against time (and artery blockage).

It used to be that such antics took place only took place during a blowout or a game that lacked much excitement. However, these are the days of Robert Griffin III’s innuendos and other attempts to integrate announcer personalities into the broadcast. In this case, the gluttonous gorging display took place at a moment in this pivotal SEC contest when the outcome was still very much in doubt.

As wacky and goofy as the display was, that didn’t sit well with everyone watching, including Cubelic’s co-host on McElroy and Cubelic in the Morning, who lit into Cole and the other SEC Network announcers over their antics.

“So Cole checks out when the O-line starts playing poorly. I am sitting here on the edge of my seat as a South Carolina fan absolutely freaking out trying to win the Governor’s Cup or whatever the hell it’s called. Trying to win that for the first time. I am freaking out. ‘Oh my gosh, our team’s gonna do it. Beamer. We’ve got to hang on, boys. Hang on. We can do it!’

“And then, I fast forward and I have to see a Bachelor contestant eating a two-and-a-half foot freakin’ corndog. I’m sitting there watching Cubelic scarf down the literal most disgusting-looking piece of food I’ve ever seen in my life. The only thing that’s more disgusting than that was when he ate a Bloomin’ Onion on the dang sideline. But that’s at least appropriate because it was a sponsored element! You’re doing it for the sponsor! Outback paid for it! They paid for it! That’s why that’s appropriate! It’s never appropriate to eat on the sidelines!”

While McElroy’s rant was somewhat joking, somewhat not, he did eventually veer into a larger point about how the role of a broadcaster appears to be shifting as they are valued as much for their on-camera personalities as they are for how they cover a football game. Not to mention putting a showcase on gluttony.

“Mark Sanchez ate a hot dog on the sideline against the Oakland Raiders and got crucified for it. Now, we’re just encouraging this. We’re encouraging this world in which we make it about us, the broadcasters. Not just us. But our overindulgence as Americans to consume high caloric content on the sidelines. You are at work. Grinding. You’re supposed to be an XO guy. You’re supposed to respect the XO. I would rather have you break down the second step of the right guard than I would see you eat a donut burger on the sideline. A donut burger on the sideline. Have some self-respect! At least eat some quinoa. At least eat an acai bowl. Eat something that will allow you to live beyond 52. Don’t eat a burger that has absolute donuts as the buns!”

To be fair, something tells us there weren’t too many acai bowls to be found around Williams-Brice Stadium that evening. You work with what you’ve got.

[WJOX, McElroy and Cubelic in the Morning]