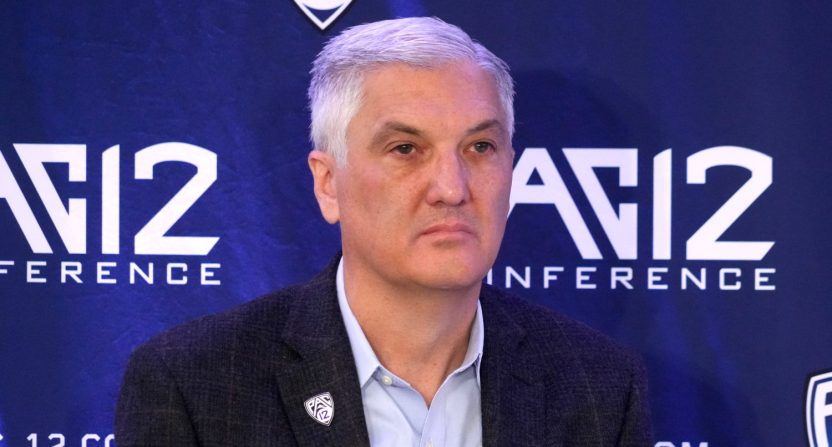 Pac-12 commissioner George Kliavkoff has made some bold claims since taking that job last year, including “Eventually we’ll catch” the SEC and the Big Ten and “We haven’t decided if we’re going shopping there yet or not” on the Big 12. His latest claim that drew a lot of attention came Wednesday night at a college athletics forum hosted by Sports Business Journal,. There, as Brandon Marcello of 247 Sports relayed, Kliavkoff said Deion Sanders’ hire at Colorado “absolutely adds value” for the conference’s media rights:

“We knew some other information was coming, including the announcement of coach Prime. Why would we do a media deal before that? … He absolutely adds value to the league.”

That statement came with some further important context, and we’ll get to that. But first, it’s worth evaluating it on its own merits. And this is a case where a literal reading and a implications reading of what Kliavkoff (seen above at the conference’s basketball media day in October) differ. Saying Sanders “absolutely adds value” could well be true if the value is small, especially considering that he’s coming in to a Colorado team that went 1-11 this year and 4-8 the season before. It’s hard to go down from 1-11.

And Colorado has already changed its previously-difficult recruiting rules for transfers, and has seen its recruiting “supercharged” following the hire of Sanders. And even if Sanders’ tenure doesn’t wind up working out for one reason or another, the internal recruiting rule change alone probably sets the Buffaloes up to land more talent and be in a better position to compete in the Pac-12 than they have been.

And that’s to say nothing of the players considering Colorado now who might not have in the past. And of the additional national TV exposure they seem set to get next year, which can pay its own recruiting feedback loop dividends. So the Buffaloes already seem “better” under Sanders before he’s coached a down, where “better” is about being competitive in conference games and winning more non-conference games.

Does that really matter for media rights? Well, it’s unlikely that it matters at a massive level. These deals are for long periods of time, and they usually cover multiple coaching tenures at most schools. And it’s far from certain Sanders will still be at Colorado when these new rights kick in in 2024-25, or that he would be a major factor altering these deals to the tune of hundreds of millions.

But media rights, and conference alignments, do somewhat depend on how schools’ profiles look at the time deals are signed. For example, it was helpful for the Big 12’s new deal that their incoming members (Cincinnati, BYU, Houston, and UCF) are all on relatively good runs in football (which is the key part of realignment and media rights, and which was a big part of why they were picked in expansion); those schools currently look like they’re carrying similar, or maybe only slightly lesser value, relative to the existing Big 12 schools that will still be there after the Texas and Oklahoma exit (whenever that comes).

The Pac-12/Colorado situation is a little different because it’s not about a school exiting or entering a new conference. But the Buffaloes do look like a stronger program than they did a week ago. And while they’re certainly not jumping to the top of the Pac-12 value hierarchy right now, it seems plausible they’re no longer dragging the average down as much. So Kliavkoff’s “adds value” has an argument for being at least technically correct, even if the value in question may not be a huge number.

Unless you’re Bureaucrat 1.0, though, technically correct is not always the best kind of correct. Just because something can be justified factually doesn’t mean it’s worth saying, and the specific way Kliavkoff did this seems to imply more national and long-term media contract value to Sanders’ hire than appears particularly reasonable at the moment. And that’s been a pattern with Kliavkoff; his candor is appreciated by those of us writing about the conference, as it leads to good quotes, and it’s a sharp contrast from many of the relatively-staid commissioners college sports has often had in the past. But his remarks on “shopping,” “grenades,” and “catching” the Big Ten and SEC haven’t necessarily all been great stances for the Pac-12 commissioner to have stated publicly, and the Sanders comments here add to that list; while they’re factually defensible (especially if the “added value” is relatively minor), the way they were said makes this hire seem like a bigger media-rights factor than it appears likely to be, and Kliavkoff has already drawn some backlash for that.

It’s worth keeping in mind that there is some fuller context here. Kliavkoff did say other things about Sanders and Colorado, how he appreciates Sanders’ video, and how excited he is to see the TV numbers for Colorado’s 2023 home opener against Nebraska. And more importantly, he had other remarks on why the media rights deal won’t be done until 2023, and there are much bigger factors there than Sanders; specifically, whether the University of California board of regents will let UCLA leave for the Big Ten (a decision coming at a Dec. 14 meeting), and the difficulty in trying to do a media deal around December holidays.

The whole thrust of Kliavkoff’s remarks wasn’t “We held off on a media deal because of Deion Sanders” and “We’re going to make hundreds of millions more because of him.” But everyone should always be aware of how even short quotes are perceived in isolation, especially in our current social media era. And that’s even more important for executives at Kliavkoff’s level. There’s nothing necessarily factually wrong with what Kliavkoff said, as long as the “value” is small and as long as Sanders is not viewed as the primary reason a deal has not been done yet (he’s not). But the decision to make those comments in this way was a bold one, and one that’s drawn some fire.