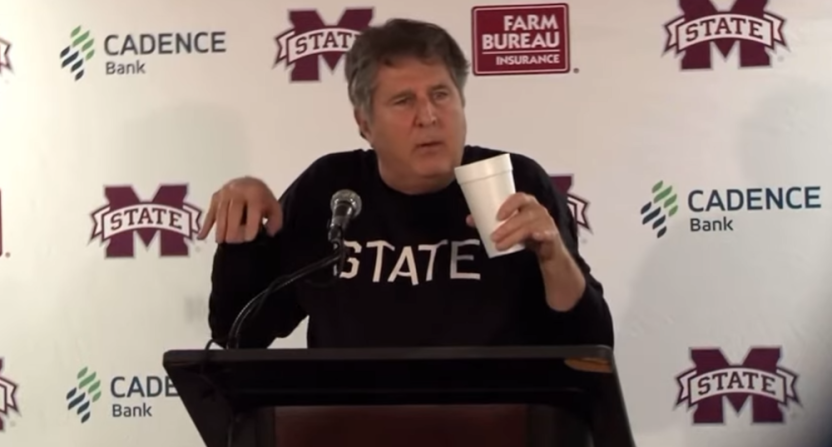 Mississippi State head coach Mike Leach’s passing at 61 certainly leaves a void in the college football media landscape. In addition to his remarkable impact on college and pro football through his Air Raid innovations, Leach was often notable for the various tangents he’d get into in interviews, press conferences, and on social media. Not all of those were positive, and some took deserved criticism, but there were a lot that were just enjoyable. Here are five of those.

The Pac-12 mascot battle breakdown: In 2012, Leach broke down the fighting abilities of various Pac-12 mascots. He did it again in 2019, leading to this great video:

Mike Leach was in peak form on a Pac-12 mascot battle.

Do Sun Devils have mythical powers? And if a Ute has a rifle, there's some definite problems. pic.twitter.com/FCE96RXawe

A transcription, via Joe Coles of The Deseret News:

“First of all, what kind of mythical powers does a Sun Devil have? We’ve got to consider that. I’m going to say the wildcat is out. The Trojan, does he have a horse or is he on foot? Does he have a bow and arrow or just a sword? The bruin, definitely formidable, then another bear up there at Cal. The tree, I mentioned that tree is going to get chopped down, unless we’re going to go with a bird and somebody might get pecked or something. The duck might lose interest and just fly away and get out of there, which may be good advice under the circumstances. The husky, no chance, the beaver, we’ll see how long that beaver can hold his breath.”

“The Ute, again, we’re back to is he on horseback? Does he have a bow and arrow? Did he trade for a rifle? As far as the beast alone, a buffalo is going to be pretty hard to tangle with. A buffalo is utterly outstanding. Did I leave any of them out?”

“The coug will find a way. Clear-minded and crafty — a combination of stay out of harm’s way and attack when you get your chance.”

The dinosaur hands discussion: In October, Leach delivered quite a remarkable speech comparing his team’s receivers to dinosaur hands (as seen above):

A transcription, starting even before that clip, via Christopher Walsh of Bama Central:

“Well, I think we need to use our hands better. We don’t move our hands very good. You know, when I was a kid and I was in grade school, I was a big dinosaur guy. I can’t remember the gas station, but they would give you a free dinosaur [toy]if you filled up there. That’s back when they had commercials on TV and then they would give something to the kids like me. And then the idea was that you should raise hell with your parents every time you’re in the station wagon. We had one, a good classic like one off the Wonder Years, one of those fake woody ones, you know, fake painted-on wood. But then the best is it would always without exception the finish and the varnish on it would peel. So then it looked more bogus than ever. So we had one of those and of course I tried to sit way back, in that jump seat back there, so you could pretend you were in a spaceship or something, and, but anyway, so they’d have these commercials and they’re hoping to get the kids to raise hell, ‘Let’s go to this gas station.’ I can’t remember what the gas station it was, and they’d give you a little dinosaur, you know. And you’d go to grade school and all that, and they’d start talking about evolution like as in if you don’t use a certain part of your body, as time evolves over century upon century, in natural selection, that part of the body disappears and even that animal might disappear.”

“I’m genuinely fearful that on our team if me and the other coaches don’t get them right, that about a generation from now their kids and their grandkids won’t have hands. Because from a lack of use those hands just disappear. Maybe they’ll be like this (Leach does raptor hands at the podium), like those dinosaur hands like this, And you’ve got like a tyrannosaurus rex, which is clearly really good at eating things, with big ol’ jaws and all that stuff, certainly athletic and can run. Those hands are like this (gestures again). I think we took a very, very, very big step as a team, which we have to correct this. We have to correct this because, you know, I think that it’s best in the end for these guys that they have good hand development and that they don’t evolve to where they don’t have hands.”

Pet raccoon ‘Bilbo Baggins’: Of course that was the pet Leach had:

Apparently he had a playground made out of some household objects ? pic.twitter.com/0SoFXwZFAt

"You've got to find your inner pirate. A lot of times things just happen for a reason. We don't know why God wants it that way, but you can't make the best out of it until you get back your inner pirate. You might be the luckiest man alive and not even know it." Mike Leach #TLAP pic.twitter.com/1LY51guRD5

Leach was certainly in touch with his own inner pirate. And he’ll definitely be missed.