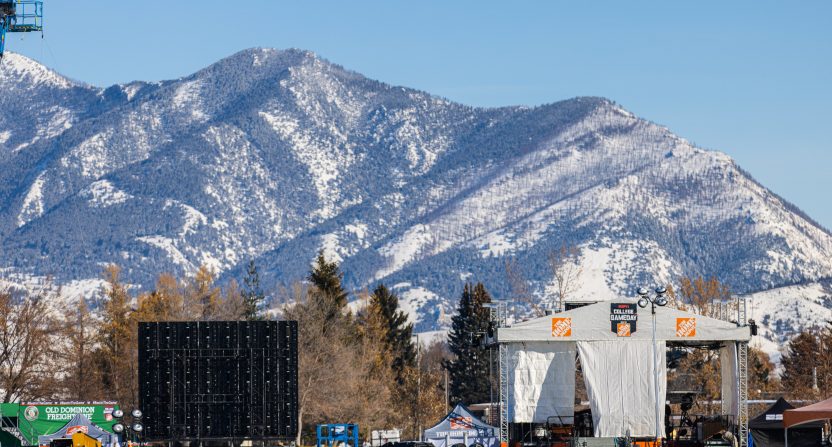 This Saturday has ESPN doing its first-ever College GameDay from Bozeman, Montana ahead of the Montana State Bobcats hosting the Montana Grizzlies in the 121st edition of that rivalry game. With Bozeman temperatures set for a high of 11 Fahrenheit Friday and a high of 27 Fahrenheit Saturday, that’s setting some cold-weather records for GameDay, as Matt Brown (who is on scene to cover that game) noted:

GameDay logistics spokesperson tells me that tomorrow will be the coldest college GameDay EVER. Some of the equipment needed to set up the set today even froze.

Brown, who writes the Extra Points newsletter, had some further interesting comments from his Twitter thread on this:

Also, he confirms that he WILL be providing voice talent for next year's EA Sports College Football

Was told that the final decision to come to Montana/Montana State was made Sunday AM. Apparently, sometimes the truck leaves on Saturday or Sunday AM BEFORE it actually knows where it is going. A drive four hours and wait sort of thing.

While the equipment challenges here are real, at least GameDay gets a spectacular backdrop:

I don't think this backdrop could ever get old. Mountains are so dang cool pic.twitter.com/2Z9fKBZjGt

It’s also notable that Lee Corso is currently set to appear live on GameDay Saturday. Corso has missed several editions of the show this year thanks to health issues, and hasn’t appeared there since Oct. 22. But Chris Fowler tweeted Friday that Corso is set to join GameDay Saturday:

Awesome news! Look who's back?! Mr Corso reunites with the @CollegeGameDay gang tomorrow up in Bozeman, Montana. Hope LC packed his warmest coat! Seeing him on my TV tomorrow will warm my heart pic.twitter.com/HRwdWLEvtI

And Rece Davis added an appeal for fans to come out:

We’re ready for tomorrow @MSUBobcats_FB fans, are you?!@ReceDavis and the GameDay crew can’t wait to see you bright and early at Dyche Field! It may be cold but bring the heat with your best signs! pic.twitter.com/JCkDmV24v0

There are certainly some challenges for GameDay in doing a show from Bozeman, first in getting the production equipment there and then in dealing with the temperatures. But there’s seemingly a lot of value to them doing this, and covering a long-established FCS rivalry like this. This is a bitter and well-precedented one, as a news article unearthed by the other Matt Brown (a college football editor at The Athletic) illustrates:

As noted in that ESPN release, this is the third new location that GameDay has been to this year. And that’s great; that helps go to show that college football is about more than just the same handful of highly-covered matchups each year. And if they’re able to overcome the weather, it should make for a fun and different show Saturday.