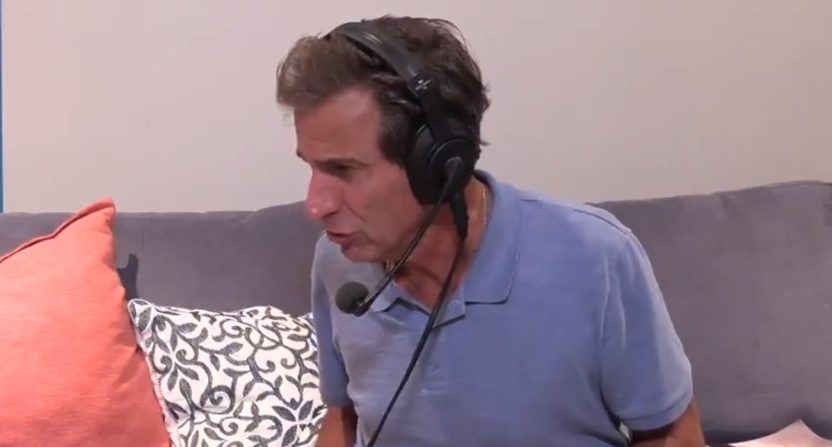 For maybe the first time in his sports media career, Chris “Mad Dog” Russo is advocating for the younger athlete.

Stetson Bennett became just the sixth starting quarterback in college football history to win consecutive national championships after leading the Georgia Bulldogs to a 65-7 victory over the TCU Horned Frogs Monday night. But if you ask Russo, Georgia damn near cheated because Bennett is so old.

Mad Dog Russo has a huge problem with Stetson Bennett leading @GeorgiaFootball to another championship at age 25.#GoDawgs pic.twitter.com/FRXxIxcXjv

“I didn’t know that he was that old,” Russo continued. “I understand we have punters who are 50 from Australia punting. But I have a problem with a 25-year-old playing against 19-year-old kids. I had a problem with [Chris] Weinke doing it for Florida State when he won the Heisman [when he was 28]. I didn’t vote for him for that reason.”

Considering some of the ridiculous reasons for vacating wins from college athletic programs, does Russo have a point? No. But it’s jarring to hear Chris “Mad Dog” Russo, who advocates for older athletes and players from past generations more than anyone else in sports media, contrive a hot take about a winning quarterback being too old. You’re telling me if a 94-year-old Bob Cousy found a loophole that allowed him to make a college basketball comeback, Russo would say no?

“If you’re 40 you can play?” Russo asked. “What is the cut-off date? When do we sit there and watch a college athlete and say ‘you know what? this is ridiculous! He’s this old playing against a bunch of 19, 20-year-old kids? This is absurd.’ When does that get to be a joke? What is the age? Thirty? There’s gotta be an age where this is enough already. Thirty-one? When do we begin to think that a guy with an 11-year age experience has a physical and mental advantage over his competitors?”

But no one is treating Georgia’s latest national championship run as if they were carried by their physical specimen of a quarterback, who stands 5-foot-11 and weighs 190 lbs at 25 years old. And even without the apparent advantage of having a 25-year-old quarterback next season, the Bulldogs are already clear favorites to three-peat.

“I have a problem with a kid. He’s not a kid. With a MAN at 25 years of age playing college football at quarterback,” Russo said.