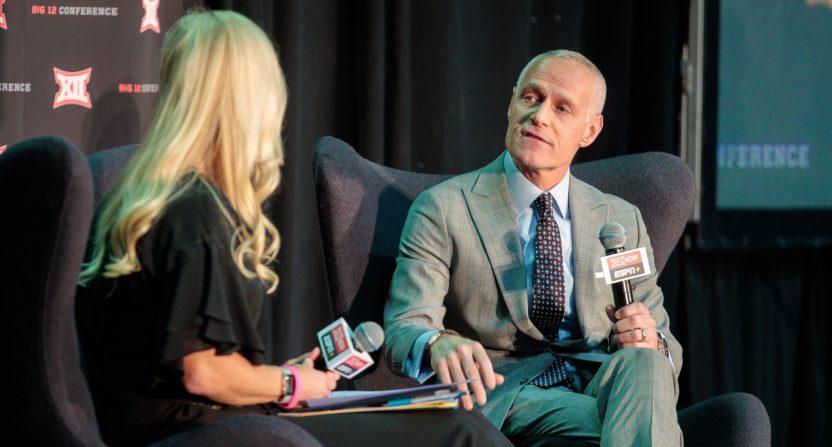 The Big 12 now has its next media deal done. The conference started extension talks with current broadcasters ESPN and Fox in August, shortly after new commissioner Brett Yormark (seen above at a women’s basketball tipoff event on Oct. 18) took office and 18 months before the exclusive negotiating window in their contract was set to open. There had been several recent reports of a deal being close, and the deal is now accomplished, as John Ourand and Michael Smith reported at Sports Business Journal Sunday:

The Big 12's deal with ESPN and Fox Sports is done. SBJ has all the details.

Here are some key details from that SBJ story:

The once-beleaguered Big 12 has stabilized its future by coming to terms with ESPN and Fox Sports on a six-year media rights agreement worth a total of $2.28B, an annual average of $380M, according to sources. The Big 12 has two years remaining on its current deal, which runs through the 2024-25 season at an annual average of $220M in its final years. The new six-year extension runs through 2030-31.

The agreement represents a big win for the Big 12 and new commissioner Brett Yormark, who since starting his job on Aug. 1 immediately began plotting to get a new deal done with the Big 12’s incumbents, ESPN and Fox. The problem was that the Big 12’s exclusive negotiating window with those networks did not begin until February 2024, so the conference convinced the networks to start negotiating an extension early by telling them that any talks would not trigger the exclusive window. But Yormark moved quickly to get deals done with both ESPN and Fox in fewer than three months.

The conference is currently on a 13-year, $2.6 billion TV deal with ESPN and Fox, a deal signed in 2012 that expires after the 2024-25 season. Its average annual value over that entire span is $200 million, so a new average annual value of $380 million would be a 90 percent jump. But as Ourand and Smith note, both the current and new deals (like many rights deals) are backloaded; the actual annual average value over the final three years of the current deal is $220 million, so the percent jump from that is 72.6 percent, and the actual jump in the first season of the new deal (2025-26) will be smaller still.

Regardless of how you slice it, this is a big overall jump for the Big 12, and that’s impressive considering they’re losing Texas and Oklahoma (likely after 2024-25). The pot of conference money is going to be split more ways now, with the conference going from 10 to 12 schools (losing Oklahoma and Texas, adding BYU, Cincinnati, Houston, and UCF), but even with that factored in, the average annual value divided by the schools will rise from $20 million ($200 million annually divided by 10 schools) to $31.7 million ($380 million annually divided by 12 schools).

How much will the schools actually get per year? That depends on a number of factors, as per-school distributions tend to come after conference expenses, but also include postseason revenue (particularly from the College Football Playoff and the NCAA Tournament). The Big 12 distributed $42.6 million per school this year, and even the allowing-for-backloading average annual value of $220 million per year from the conference media deals would only come to $22 million of that. But the conference media deal contribution will rise under this new deal; it won’t hit that average annual value of $31.7 million initially thanks to backloading, but it will be above what it is now. So the conference is at least in position to pay its schools more, but that will depend on CFP and NCAA Tournament participation and revenues.

As for the details on how this deal will look, Smith and Ourand write that ESPN will have the conference’s “A” package, including the top four football picks each season, six of the top eight picks, eight of the top 12 picks and 12 of the top 20 picks, plus the football championship game and the basketball tournament championship game. Fox will have 26 football games per year across their broadcast network (many of which may be their Big Noon Saturday games) and FS1, and they’ll also have Big 12 basketball for the first time. (It will be interesting to see if that takes the place of their current Big East package; that deal, signed in 2013, expires after the 2024-25 season.) It’s not clear how much of the ESPN content will be on ESPN+ rather than linear networks, but the Big 12 has been a key part of ESPN+ to date, so it seems likely that will continue.

This deal’s an important move for the Big 12 on a few fronts. For one, it gives their schools certainty on what’s ahead in a world after Texas and Oklahoma leave, and there’s going to be even an increase (at least, in annual average value) there. That’s largely about the way rights deals have gone up since the current deal was signed in 2012, as it’s hard to argue that the conference is more intrinsically valuable minus Oklahoma and Texas but plus these four new schools, but it’s still certainly notable that the conference has pulled off a decent increase here. That might help deter potential “shoppers” like Pac-12 commissioner George Kliavkoff from targeting the Big 12. And it might in fact encourage the reverse, especially with uncertainty ahead about the Pac-12’s own next media deal, with some previous reports of some Pac-12 schools being interested in the Big 12, and with the Big 12 being “open for business.”

It’s also notable that this is a relatively short-term deal, running only through the 2030-31 season. That will allow the Big 12 to go to market again ahead of the SEC (whose deal expires in 2033-34) and ACC (2035-36), albeit behind the Big Ten (2029-30). No one knows exactly what the rights landscape will look like then, or how it will vary in those different years, but there definitely can be some advantages to hitting the market first rather than taking what’s left.

We’ll see how this deal winds out working for the Big 12. There’s still lots that could happen to alter the situation, from what the Pac-12’s own media deal winds up looking like to if there’s any further conference realignment. But based on the current situation, this seems like a pretty solid extension for the Big 12, and one that could position them for a reasonable level of success even after Texas and Oklahoma depart.