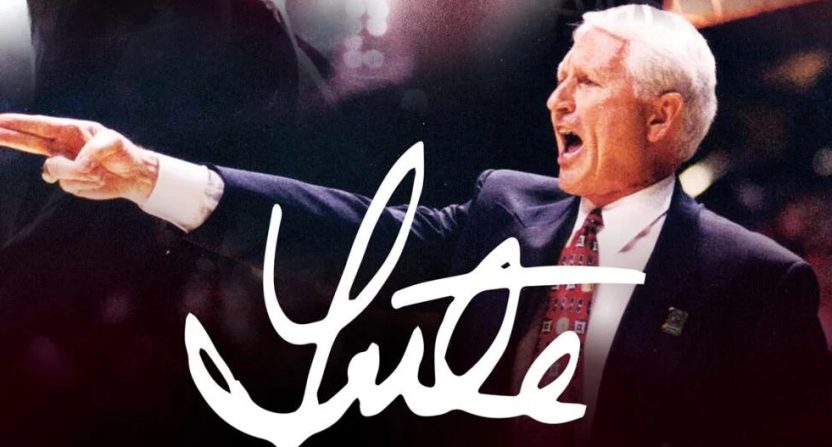 On Wednesday night, CBSSN will premiere LUTE (at 10:30 p.m. ET). It’s a documentary on former Arizona Wildcats‘ basketball coach Lute Olson. Ahead of that national premiere for the film, director Brett Rapkin (known for directing The Weight of Gold, Spaceman, and more) spoke to AA about the project, and said this one felt personal to him thanks to his arrival at Arizona in 1996 before the Wildcats’ 1996-97 title.

“I went to the University of Arizona sight unseen because I knew they’d have great weather, great sports, especially basketball, and most importantly, they let me in,” Rapkin said. “And I got there in August or September, and by that March, they’d won a national championship, the first-ever in the school’s history in basketball. And they haven’t won one since. So I fell in love with the program. And every year, they kept reloading, bringing in guys like Gilbert Arenas and Richard Jefferson. It was just incredible.”

Rapkin said Olson’s 2020 passing motivated him to pitch this documentary.

“When Lute Olson, the long-time coach, passed away, as someone who had been making a career doing mostly sports documentaries ever since, I was like ‘Is there a way we can help cement his legacy, and create maybe more of a national footprint for him than he has had?'”

He said having a personal connection to documentaries has been very helpful for him.

Rapkin said as well that projects further back in history like this one have some advantages (including no late-breaking developments), and the main challenge they come with is participation.

“Doing something that’s historical, or doing something that’s kind of cinéma vérité, like The Weight of Gold where it kept evolving during the process, they’re two very kind of different projects, and I love doing them both. This was obviously historical, so it was just figuring out ‘What’s the most entertaining way to tell this story?’ And fortunately, pretty much all of Lute’s star players, from Steve Kerr to Andre Iguodala. Which is ironic because Steve was on Lute’s first team at Arizona, and Andre is, I think, the last NBA player who’s still in the league that Lute coached, and it’s ironic that they’re together at Golden State.”

Rapkin added that having previous Arizona star and former Wildcats’ assistant Jason Terry involved as an executive producer made those gets easier.

“When the project started, he was an assistant coach at Arizona. In the time since, he’s now an assistant with the Utah Jazz. And getting in touch with 20 former NBA stars, or whatever the number is, is no easy task, and Jason brought a lot of legitimacy to the project. And his interview was also fantastic; Jason was great on camera, especially talking about that ’97 tournament run. He brings a lot of enthusiasm to telling that story.”

Rapkin said he’s somewhat surprised that Olson’s career hasn’t received more national coverage, but he thinks some of that is about personality.

“First of all, Lute was a pretty low-key guy. He had a huge presence when he walked in the room, ‘It was like James Bond,’ as Gilbert Arenas says in the film. He was a tall guy, he was always well-dressed, he had a great head of white hair. But he wasn’t a huge personality, and I don’t think he was a big self-promoter. And also, I think there’s that East Coast bias when it comes to certain sports. And Arizona, Tucson’s not the biggest market, and I think for that reason, he didn’t get the attention that I think some other coaches did.”

As for surprises during this film, Rapkin said they needed to license more game footage than he’d initially thought would be necessary.

“We ended up having to license even more NCAA footage that I expected. because there were just so many great NCAA Tournament games. Arizona came close a bunch of times, they went to the Final Fours. And Lute actually went to the Final Four with Iowa before he came to Arizona, which is something a lot of people don’t know. But then they had some first-round losses; they lost to Steve Nash and Santa Clara in 1993, and there were times when Lute and probably the school wondered if it was time for a change.”

“But he stuck around, and in 1997, they were able to put together a team that got the job done. And you could put together a whole documentary on that 1997 team, with Mike Bibby and Miles Simon and Jason Terry.”

Speaking of that 1997 team, which is a key part of this documentary, Rapkin has an interesting insight on an underrated figure there.

“The x-factor with that team might have been Josh Pastner, who’s now the head coach at Georgia Tech. Josh came in, and he talks in the film about writing over 1,000 letters just looking for an opportunity to walk on, he didn’t even care it if it was a Division I school. And the only response he got was from Lute Olson. And I think Lute realized that in Josh he had somebody who was very inspiring, but also someone who could work out the team above and beyond.”

“And that’s what he did. There’s a section of film where you see Mike Bibby talking about how much Josh worked with them after practice. And he did that with a number of the guys, and I think that was a big reason that they were able to bond and make the magic happen during March Madness.”

LUTE premieres on CBSSN at 10:30 p.m. ET Wednesday. It will be available through CBS platforms after that.