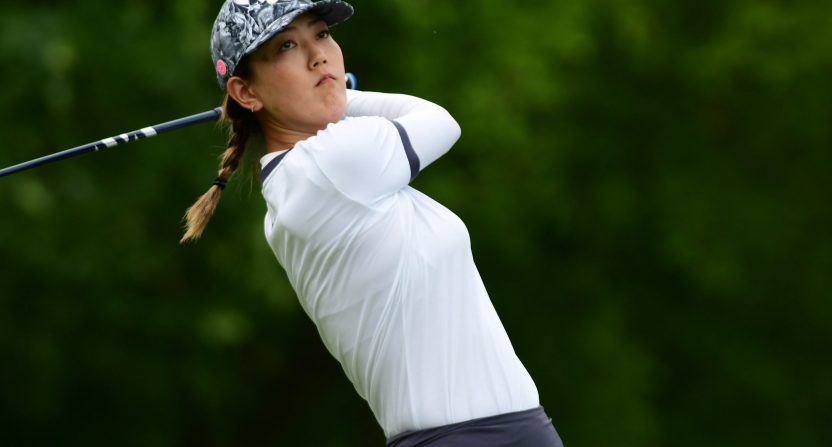 The PGA Tour is still considering bids from various outlets for rights, a deal that would begin with the 2022 season of coverage. In October incumbent golf broadcast partner CBS announced they were moving on from Peter Kostis and Gary McCord, which was not well-received by either man.Those moves, along with CBS announcing that Davis Love III would be added to the coverage team as an analyst, were seen as a signal from CBS that they were serious about at least a soft refresh of their coverage, likely in the face of aggressive pitches from other networks. (It’s just a guess, but it’s not hard to see other bidders pointing out the flaws in CBS golf coverage as part of their own bids.)Now CBS has announced more changes to their golf coverage team, with longtime Golf Channel analyst Frank Nobilo being bumped up to full-time CBS analyst, and LPGA player Michelle Wie coming on for digital coverage, including at the Masters. There were also a host of other changes, including former Masters champion Trevor Immelman joining as a coverage analyst as well.Via CBS Sports:

Frank Nobilo, who has contributed to the Network’s golf coverage for the past five seasons, will expand his role and serve as an analyst for the full CBS Sports golf season. Nobilo, a veteran broadcaster, retired from golf in 2002 after winning 15 tournaments worldwide.Masters Champion Trevor Immelman joins as an analyst contributing to the Network’s PGA TOUR coverage as well as CBS Sports’ cross-platform coverage of the Masters and PGA Championship. Throughout his distinguished playing career, Immelman won 11 events worldwide – including the 2008 Masters – and was also a two-time participant in the Presidents Cup in 2005 and 2007.

Dottie Pepper, who joined the Network in 2015, has been elevated to lead on-course reporter. Pepper is a 17-time LPGA winner and two-time Major Champion, winning at the Nabisco Dinah Shore (now the ANA Inspiration) in both 1992 and 1999. She was honored in 1992 as the LPGA Player of the Year.

Analyst and Coach Mark Immelman, who joined CBS Sports in 2016, will increase his duties with the golf team this season, working the majority of the Network’s PGA TOUR schedule. Additionally, he will continue as part of CBS Sports’ cross-platform coverage of the Masters and PGA Championship. He also currently serves as the Director of Golf at Columbus State University.Andrew Catalon, who has contributed to CBS Sports’ multimedia coverage of the Masters and PGA Championship since 2011 and 2012, respectively, also will increase his golf duties on the broadcast side, serving as host for select PGA TOUR events. In addition to golf, Catalon serves as play-by-play announcer for CBS Sports’ coverage of the NFL and college basketball, including the NCAA Tournament.Additionally, Michelle Wie, the five-time LPGA TOUR winner, will contribute to CBS Sports’ multimedia golf coverage this season, including the Masters.

So, that’s the whole CBS crew, which remains fronted by Jim Nantz and Nick Faldo. Assuming CBS retains their current rights whenever the PGA Tour makes a decision, it’s likely to be the broadcast team from now into the next era of golf coverage in 2022. These changes aren’t really what people who criticize CBS golf production (and other current networks) complain about, though. Viewers will forgive a lot of commentary as long as the broadcasts show more golf, especially more live shots, from a wider variety of players. There are other issues too, to be sure, but that’s an important starting point.Hopefully the PGA Tour is making that demand as well, because too often a non-major weekend golf broadcast is homogenized to the point of being indistinguishable.[CBS Sports]