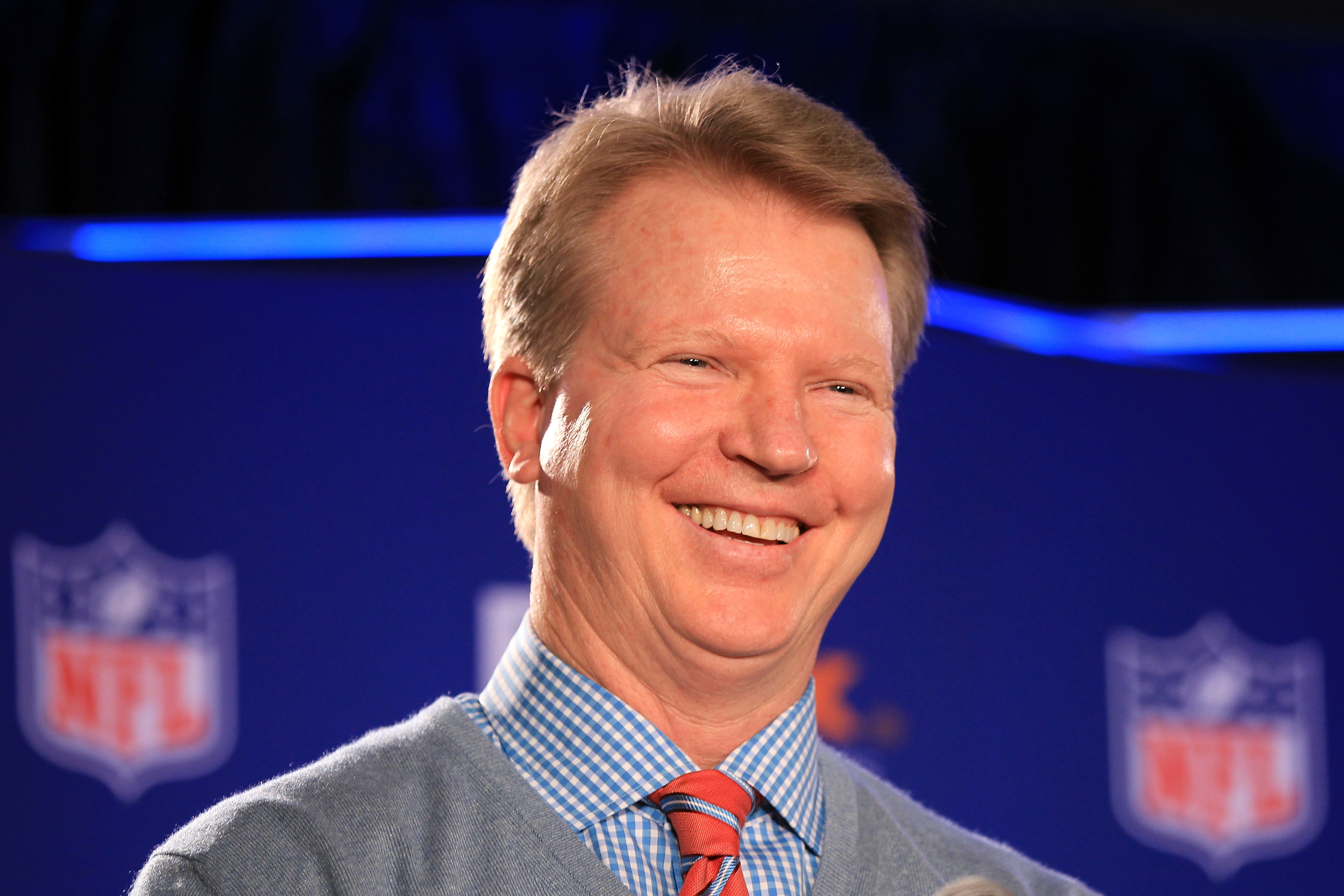 The news of Phil Simms being replaced as the top analyst for the NFL on CBS wasn’t totally unexpected. There were rumors in 2016 that CBS was pursuing Peyton Manning after he retired from football, but they never came to fruition. Then this week, Tony Romo fell into CBS’ lap. While Simms has said he will never quit broadcasting on his own volition, he has some thinking to do on his next move. He’s still under contract to CBS.

In a conference call announcing Tony Romo as Simms’ replacement, CBS Sports Chairman Sean McManus said he and Simms were discussing what his next role with the network will be. Even though Simms is no longer the “A” analyst for the NFL on CBS, he does have a few options with the Tiffany Network, and potentially with others.

Being a top analyst on the NFL is like being a Supreme Court justice. It’s practically a lifetime appointment until the network yanks the rug out. Simms has been an “A” analyst for two networks dating back to 1995. Though granted, he was teamed with Paul Maguire on NBC before going solo when he moved to CBS in 1998.

Now that he’s no longer the main analyst for the NFL on CBS, let’s take a look at what Simms could do to secure his future in broadcasting.

TAKE A DEMOTION TO THE “B” TEAM

Let’s say Simms decides to stay with CBS and accept an assignment to the “B” team with Ian Eagle. It’s not unprecedented in sports television. When Simms and Maguire were named co-analysts for the NFL on NBC, they supplanted Bob Trumpy, who remained with the network until the Peacock lost the NFL in 1998.

If Simms decides to remain with CBS as a game analyst, the “B” team is the most likely place where he’ll land. If that’s the case, it will affect the rest of the network’s lineup, as Dan Fouts (who is the current “B” analyst) with Eagle would likely go back to the “C” team to be partnered with Kevin Harlan. And that would cause a ripple effect for the rest of the analysts, as they would likely be pushed back and perhaps one would have to be dropped to make room.

Simms would no longer call the playoffs every year, though he would have a postseason assignment every other year since CBS and Fox alternate having two games in the divisional round. And if Simms is on the “B” team, he would be calling a playoff game this upcoming season.

Accepting a demotion would certainly be a blow to the ego, but it’s not something that hasn’t been done by other analysts (a story we’ll explore later this week at Awful Announcing).

If Simms doesn’t want to go down to the “B” team, he has another option.

Before Simms became a game analyst at NBC, he worked in the studio for ESPN in the 1994 season. And since Inside the NFL moved to Showtime from HBO, Simms has been on a panel with Boomer Esiason, Michael Irvin, and Brandon Marshall. In addition, Simms has appeared on CBS Sports Network’s Monday Night QB program.

On Inside the NFL, Simms and Esiason’s banter has made for some funny television and that could extend to the NFL Today. Last week, a vacancy popped up on the NFL Today when CBS announced Tony Gonzalez was leaving the show. Simms could take his place and join James Brown, Boomer Esiason, Bill Cowher, and Bart Scott. It would ensure that Simms will be part of CBS’ coverage all the way through the postseason.

And for those who haven’t warmed to Simms as a game analyst, perhaps seeing him in small doses as a studio analyst would be an improvement.

JOIN FOX AND BECOME ITS “B” ANALYST

If Simms can’t come to an agreement with CBS, he could move to Fox, which has an opening right now. Ironically, it’s the same position that Fox was seeking for Romo – the “B” analyst working with Kevin Burkhardt. That position is open following John Lynch’s departure for the San Francisco 49ers.

It would be interesting for Fox to have two “A” analysts in Troy Aikman and Simms. But in this case, Aikman would be firmly entrenched as the top analyst while Simms would be on the “B” team. But one could argue that if Simms wouldn’t accept an assignment to CBS’ “B” team, why would he move to Fox to accept a move to its “B” team?

You could counter that it’s a fresh start for Simms with a new network, and maybe Fox could sweeten the deal by giving him appearances on Fox NFL Sunday during the postseason.

LEAVE CBS AND MOVE TO RADIO

Maybe leaving television altogether might be best for Simms. One possibility is joining SiriusXM’s NFL Radio, where he can talk football full-time while not having to see the CBS bosses.

Another option might be joining Westwood One Radio and being a co-analyst alongside Esiason on Monday Night Football with Kevin Harlan. Esiason doesn’t maintain a full schedule because he doesn’t call games on the West Coast. And during the postseason, Esiason stays with the NFL Today and only calls the Super Bowl. With Simms freed up from CBS, perhaps he could not only work the games that Esiason does not, but also form a three-man booth on Westwood One with Harlan when Boomer can work.

Even though CBS has made the move to bring in Tony Romo as its main NFL analyst, it doesn’t mean we have seen the last of Phil Simms. And while that may not warm your cockles, it’s likely that he’ll still be seen and least heard on a network near you in 2017 and beyond.