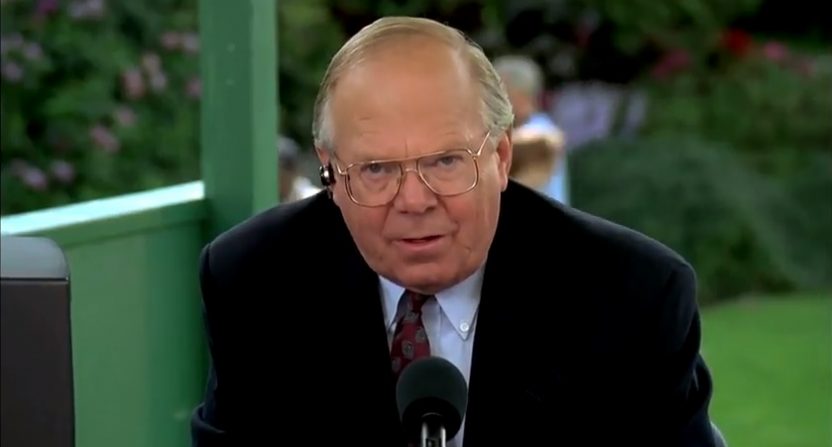 With Verne Lundquist (seen above interviewing then-PGA of America president Jim Remy in 2010) stepping away from SEC on CBS football after the 2016 season and the NCAA men’s basketball tournament after last year, many were happy to hear him on the CBS airwaves again at the Masters earlier this month, where he called the 16th hole. (He worked last year’s Masters and PGA Championship, but underwent back surgery this November and wasn’t on CBS’ football or basketball coverage this year.)

One of the first questions Deitsch asks is “What was it like for you, Verne? What was it like to be away from calling a broadcast for a long time, and then the first one you come back is obviously one of the most iconic sporting events in the calendar.” Lundquist responds by talking about the 2017 NCAA Tournament and how it gave him football flashbacks: “It was thrilling for me, Rich. The last event I had worked for CBS prior to the Masters at the beginning of April was in Madison Square Garden. Jim Spanarkel and I had the regional finals for the East in New York. Ironically, I think, the two finalists for a berth in the Final Four were South Carolina and Florida. And in a bit of an inside chuckle, I came on the air and said ‘I never thought I’d say this again in my life, but welcome to the SEC on CBS.'” It was heartfelt, I thought having those two teams from the SEC in the final was really meaningful to me, and to them obviously, and South Carolina won it.”

“I didn’t know at the time that was going to be the last basketball game I did. But {CBS Sports chairman] Sean McManus and I chatted about it, and he knew my back surgery was coming up in early November, this fall, so it just seemed like the right way to step back. I’d done the tournament for 34 straight years, very much like my string at Augusta. But I will share with you, that first day, whether it’s a Thursday or a Friday, where you’re asked to do four telecasts, it’s really a challenge. So we agreed that I would drop basketball. And I’ll get to the Augusta question in just a sec, but I love the fact that I’m still employed by CBS, and we reached a two-year deal for me to do two events a year. And I told Sean, with tongue firmly in cheek, ‘I don’t care what you pay me as long as it covers my minimum for my insurance.’ He agreed.”

Lundquist then goes on to talk about the experience he and his wife Nancy had at the Masters, which includes a discussion of how they’re friends with the parents of golfer Patton Kizzire, who was competing in his first Masters, and how they got to spend time with the Kizzire family at the tournament. But the key part is about what getting to call that event again meant for him.

“So now to Augusta. I really was thrilled with anticipation, and that’s the longest I’ve ever gone without being involved in a broadcast. And my wife went with me for only the fourth time in 34 years. And she had a great time. CBS treats its clients and the wives of broadcasters very well, they have a hospitality suite to the right side of the first fairway. …[Nancy] really had a great time, and I did too, and it was kind of like a reunion, you know, to be back with all my colleagues and especially, Richard, the technical crew. Because I would say half to three quarters of our SEC technicians were present in their various roles at Augusta. So there were a lot of hugs and a ton of ‘How you doing?’ “I’m doing fine,’ that kind of thing. And the golf itself was pretty thrilling.”

It was indeed a thrilling tournament, and having Lundquist involved again was a highlight for many golf fans and many sports fans. And it’s good to hear that he’ll be calling some golf for CBS for a while yet. Lundquist will be 78 in July and has had some health challenges, including that back surgery, but he’s still a beloved announcer, and a familiar voice for many. And we’ll get to hear some of his calls for some time to come.