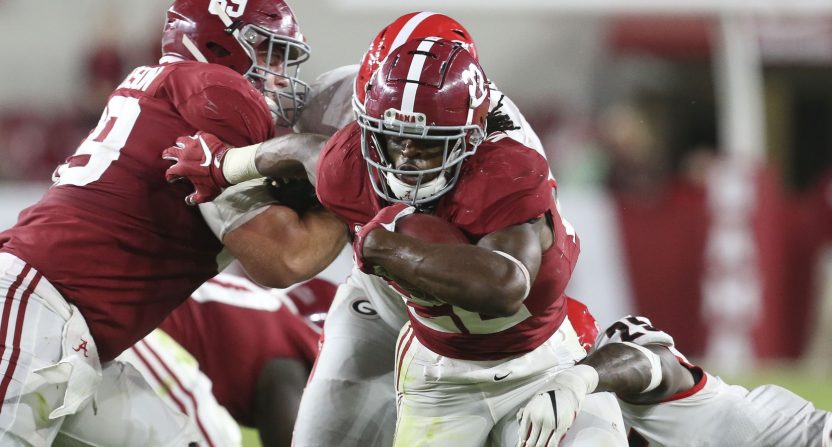 To the shock of no one, Saturday night’s top five matchup between Alabama and Georgia on CBS drew the largest college football audience of the season by a significant margin.

The Crimson Tide’s 41-24 victory over the Bulldogs drew 9.611 million viewers, far and away this season’s most-watched game. For context, only one other game this year has even cracked the five million viewer mark. A week earlier, Tennessee-Georgia on CBS drew 5.77 million viewers.

Since the SEC returned to play at the end of September, the CBS game of the week has been the most-watched game of each week. Fox’s schedule has lagged without the Big Ten, as only one game (the Red River Shootout from two weeks ago) has drawn at least three million viewers, while it’s been much more of a mixed bag for ESPN’s ACC-heavy schedule (the SEC games on cable are doing pretty well overall, but the ACC and Big 12 games are struggling). As for NBC, they’ve only aired three Notre Dame games on broadcast (and one on cable), and those three games have finished first, sixth, and second on their respective weekends in viewership.

This seems like the weekend where we’re going to see college football viewership start ticking up across the board, largely because the Big Ten is back. Ohio State hosts Nebraska on Fox in the noon window, and Minnesota hosts Michigan in primetime on ABC, with both games likely drawing strong audiences. In the afternoon, CBS has Alabama-Tennessee, another game that should draw quite well. Fox will counter that game with Iowa State-Oklahoma State, the best Big 12 game of the day, while ABC has Notre Dame-Pitt in that window.