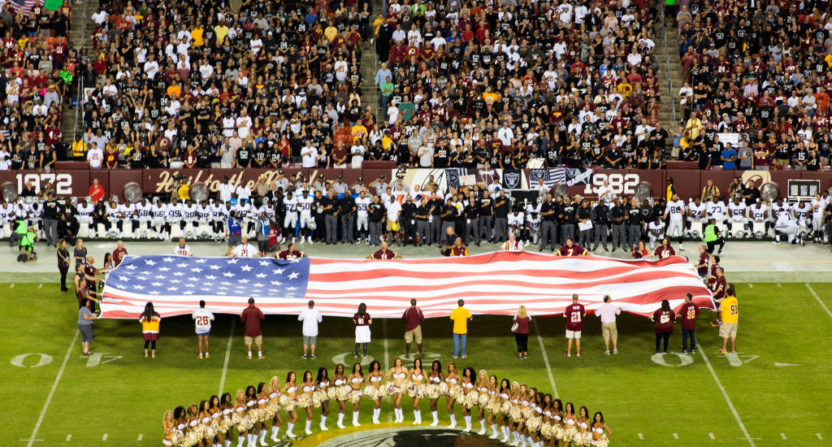 According to Sporting News’ Michael McCarthy, CBS will air the anthem live on Thursday Night Football, covering whatever protests do or don’t happen during it. This news comes a day after Newsday reported that Fox will not air the anthem before its games this weekend, “because of the way the commercial format works and the timing of the anthem to get to the kickoff.”

Though Fox surely has its reasons for sticking to a rigid production schedule instead of covering the single biggest story in the league, CBS’ decision seems to better serve viewers. Millions of Americans are deeply interested in what the players do before this weekend’s games, whether because they admire the protests or because they’re angry about them.

Not airing the anthem seems to be dodging a subject that will be discussed at every water cooler in America on Monday, not to mention all over social media sooner than that. Hell, some viewers who don’t even care about football are likely to tune in to see if players kneel, stand with locked arms, keep stretching, or whatever else they have planned.

Some time soon, this story will fade, as the players either quit standing or the audience normalizes to a few protesters. But for now, the anthem demonstrations are a major story not only in sports but also in American news in general, and you would think any network would want to cover whatever happens next.

CBS has not indicated whether it will also show the national anthem for its full slate of games Sunday.

The Bears and Packers will kick off at 8 p.m. ET on Thursday, with the anthem, of course, airing sometime before that.