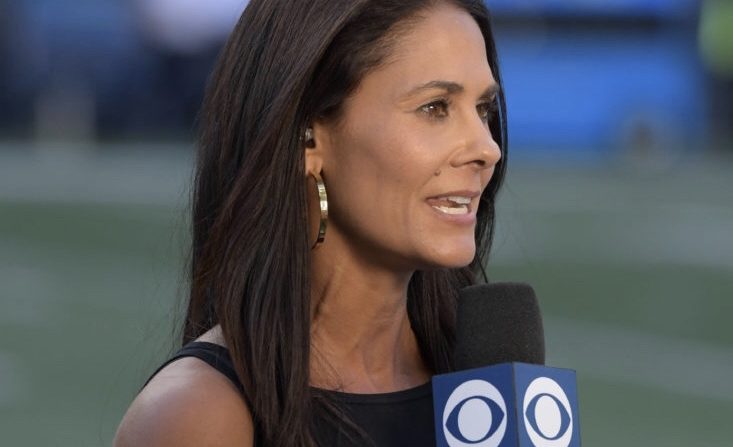 Wolfson won’t know where she’s going for the first round until late Sunday night, well after the selections are made. How does she prepare with so few days to get ready? “How I handle it is I get the pulse on almost every team going into that weekend. I save a lot of articles on my phone. Once it comes out (Selection) Sunday night we know where we’re going and we may not know until midnight that night sometimes where we’re headed. You’re not able to do any work until Monday and then you’re kind of crashing for the next few days.”

Wolfson hopes that she gets at least one Big Ten team and an AAC team in the subregional to where she’s assigned. Her best case scenario? To have Michigan, Purdue, Ohio State, Michigan State, Cincinnati, Houston, or Wichita State, or even perhaps a marquee team she has seen on TV since her NFL season ended after the AFC Championship.

In advance of that first day, Wolfson is calling sports information directors to find out stories, going to the practices, and also talking with the players’ families. She says the radio announcers and beat reporters are great resources because they know the team the best and can provide interesting tidbits about the players and coaches. “You’re trying to educate the audience. So many people who tune into the tournament don’t watch college basketball all year long or they watch their team or their conference so you’re really trying to educate these fans. I try to find those fun stories about a player or the team and things that are relevant as well.”

Part of her preparation is to follow the social media accounts of the beat reporters and players, because Wolfson says that is where she can find some of the best stories to introduce the players.

Last weekend, Wolfson was in New York for the Big Ten Tournament and witnessed her alma mater Michigan win the championship for the second straight year. She said while she was happy for her school, she also had a job to do. “It’s so difficult covering your alma mater because you’re trying to hold your emotions in check, but once they do win, you can kind of take that sigh of relief and almost celebrate with them. We all have allegiances to schools, but you keep them inside while you’re actually broadcasting the game, but once it comes out, I’m proud of them and it’s also a team everyone can root for.”

Of course, going into the NCAA Tournament, it reminds people of the viral moment when Wolfson was caught on-screen reacting to Kris Jenkins’ championship-winning shot in 2016 behind Villanova coach Jay Wright.

“What was great about that was that I didn’t have to rush off the court to do an interview,” Wolfson said. Normally, she has to prepare for a postgame shot, but she was able to stay on press row to see the Jenkins shot. “My reaction was everyone else’s reaction. That’s the thing, I’m a fan and can appreciate what just took place. It was jaw-dropping. And the great juxtaposition, here I am with my jaw agape wide open in total shock and Jay Wright is cool, calm and collected walking across the court.” Wolfson she loves that it went viral because it reminds her of the best college basketball game she’s been a part of.

For the past four years, Wolfson was a part of the Thursday Night Football package that aired entirely on CBS from 2014-15 and the first half from 2016-17. But with TNF moving to Fox, Wolfson has conflicted feelings. “There’s something about doing a standalone primetime game. You know everyone’s watching, it has a different feel to it. I get a lot more responsibility doing the pregame and postgame shows. There’s something special about it.” But at the same time, as a mother to three young boys, Wolfson knows that she’ll be home to help them with their homework and drive them to their activities, but when Thursday Night Football is on Fox, a part of her will miss it.

Wolfson will be covering the American Athletic Conference semifinals and championship game this weekend for CBS with the NCAA Tournament crew of Jim Nantz, Grant Hill, and Bill Raftery.