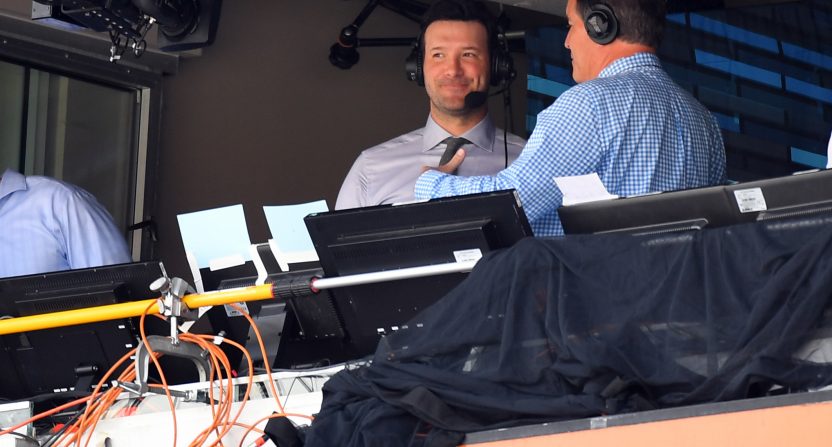 If you’re on this website and reading the words on this page, surely you’ve already heard all about Tony Romo’s ability to predict plays before they happen, most notably in overtime of New England’s AFC Championship-winning drive in Kansas City 10 days ago. But in speaking with Awful Announcing regarding Romo’s improvement as CBS’ lead analyst going into Sunday’s Super Bowl 53, Romo, Jim Nantz, Tracy Wolfson, and producer Jim Rikhoff demonstrated how he’s gotten better in so many more ways than just his ability to diagnose coverages and point them out in the season’s biggest spots.

“The biggest thing is I try not to force anything in,” Romo told Awful Announcing via conference call. “Just the game calls itself. It’s a story and you kind of call from there, and when your stuff fits in there that you’ve prepared with, then you use it.”

Romo’s preparation received a lot of notice when asking around the room a few weeks ago at CBS’ Super Bowl media day in New York.

Wolfson noticed that Romo is asking better questions during weekly pregame meetings with players and coaches.

“He really just understands the whole process of the broadcast, and how important that is to our broadcast and what you get out of that,” she told AA. “I think actually the behind the scenes stuff is really where he grew, because now he’s able to take everything he learns from meetings and use it.”

And that goes back to what Romo said about picking his spots during a broadcast. In conversations with veteran play-by-play announcers like Kevin Harlan or Ian Eagle, they’ll tell you that only a fraction of what they diligently prepare for before a game actually makes it on the air during a given broadcast.

“There are plenty of things I loved going into this last game that I never communicated or talked about,” Romo said.

After a 14-year career as a quarterback, Romo knows how to watch game film, with Nantz calling him a “sick film room guru.”

“So when we have these key moments late in the game and we’re all dazzled by what he’s doing, this is a testament to years and years of his work and preparation,” Nantz told Awful Announcing. “People think Tony’s a fortune teller. But this isn’t guesswork and this isn’t psychic ability. This is a testimonial to a guy during his career that spent a lot of time figuring it out.”

So couple that ability to process game film with his developed ability to prepare for the different nuances of an intricately detailed television broadcast, and you have Romo’s improvement from year one to year two.

“He hears a coach or a player tell us something and he’s able to weave it into the broadcast,” Wolfson said. “So it’s not just reacting to what he sees on the field, which comes so naturally to him. But he’s also incorporating what those coaches and players are telling him and maybe anecdotes or backstories that fit in with everything that he sees out there.”

Rikhoff, who will produce his first Super Bowl for CBS on Sunday and has worked all season with the Nantz-Romo-Wolfson crew, said that while Romo is such a broadcasting natural (this everyone agrees with), he’s getting much better at understanding how a telecast works.

“There’s still stuff to learn. I’m still learning every week,” Rikhoff said. “But now I think he’s got a greater understanding of the whole big picture of the broadcast, not just what his job is.”

Now Romo has a better understanding of how the replays work on a telecast, and which camera angles would work best to optimally queue him up for analysis after a play, according to Rikhoff.

“He can ask for things now that he never would have asked for in week eight of last year,” Rikhoff said. “He wouldn’t have even known to ask ‘hey, give me the slash angle.’”

Nantz has noticed that as well.

“Don’t ever underestimate how smart he is,” Nantz said of Romo. “He is brilliantly fast at being able to figure things out, what people’s roles are, how the all-22 camera can be used on a certain shot for a replay. He has a better understanding of how a broadcast gets on the air than anyone I’ve ever seen who just stepped off the field.”

However, Nantz disagrees with most people who have noticed Romo’s improvement, arguing that what his partner is doing in the booth is more of a continuation from season one than anything else.

“The viewers are saying it and I’ve been hearing it from people ‘oh you guys have taken it to another level,’” Nantz said, “and maybe it’s even more rewarding if you are improving and you’re really not even aware that you are. You’re just going through the repetitions and it happens naturally.”

Romo said that a part of his improvement is because of the wisdom Nantz has imparted.

“He has great insight into just your thought process at a lot of different moments, at the start of the game or in our on-airs,” Romo said. “Obviously I’m extremely fortunate that I got him, and I think my improvement levels in some ways is a by-product of having him around, Jim Rikhoff and the people around me. It makes you look better than you are.”

Nantz isn’t saying that things aren’t different from year one to year two, “I’ll leave that for others to judge,” he said. “All I could tell you is it felt smooth, easy, relaxed, energetic, enjoyable, thrilling. It’s been such a great ride.”

And while Nantz was gaining some momentum in describing his successful partnership with Romo, he decided to end the conversation on a high note.

“We’re just getting started,” he said. “We want to do this for a long time together and we’d made a pact between us and we want to have a chance to one day to be regarded as one of the great broadcast teams ever to broadcast the NFL.”

Nantz and Romo are off to a strong start in that regard, and a memorable Super Bowl broadcast would go a long ways towards establishing the duo as the best current broadcast team in major American sports. Just don’t think that he’s only gotten better at predicting who Tom Brady will throw to in the season’s most critical moments.