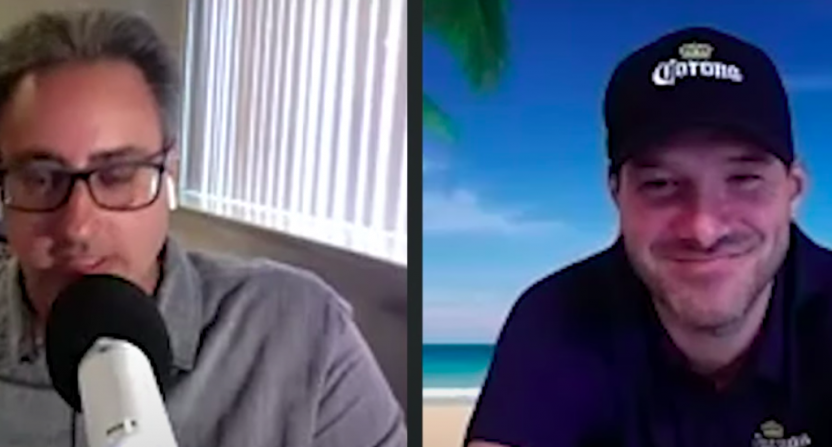 Tony Romo went from NFL quarterback to NFL announcing wunderkind pretty quickly in 2019. His seemingly prescient ability to predict plays right before they happened made him an immediate star for CBS and his continued ability to wow viewers made him an extremely hot commodity when his contract was up soon after (in spite of the detractors). It was no surprise when CBS re-signed him and made Romo the highest-paid TV analyst in early 2020.

All of which is to say that Romo might have made it look very easy to get where he is today. However, during a recent appearance on the SI Media Podcast with Jimmy Traina, Romo admitted that his early broadcasting work left a whole lot to be desired.

You can also watch this week’s SI MEDIA PODCAST with Tony Romo on YouTube. https://t.co/iUtZ9FHimO

Romo told Traina that when he was hired, he started out by doing practice games on his own. However, that didn’t feel like enough for him (“I wanna feel how this is gonna go. A thousand reps kinda thing.”) and he didn’t want to get thrown to the wolves only to make all his mistakes live. So CBS came up with a plan that allowed him to see where he was going wrong without having to deal with the Twitter mob just yet.

“I’ll give CBS credit, [chairman] Sean [McManus] and [president] David [Berson] got together and they came up with a plan. Jim Nantz and [director] Jim Rickoff came down and we did all these practice games, and I sounded like Ferris Bueller’s Day Off, the teacher. ‘Bueller, Buller.’ ”

Romo didn’t mince words when it came to what he thought of that early work, which he deemed “so boring.”

“I watched myself. It was so boring, Jimmy. You would’ve been like, ‘This guy needs to stop doing this right now.’ That was the start of me listening to myself.

“It was just trial and error and gaining an understanding of what I would want to hear. When I listened to it, I was like, ‘Oh my gosh, I am the worst announcer ever. I am so boring.’ I cringe already listening to myself, but that, I was like, ugh, disgusting.”

Romo says that what helped him was applying the same mimicry he used to improve as a quarterback to the announcing game. So he used many of the businesses’ top talents as a way to figure out his own voice.

“I tried being Jon Gruden, John Madden, Phil Simms, Troy Aikman, Cris Collinsworth…and what I found was one day, 50 times in doing games, it clicked for me, and not to say that everyone loves it, but I found my voice and the sound and the way I was saying it, I actually was like, ‘Oh, that was O.K.,’ and that’s a big deal for me to say that.”

Romo also found that attempting to keep friends and family engaged while they were on their phones was an extremely helpful way for him to figure out the tone and “emphatic nature” that kept their attention.

You can watch the full interview here.