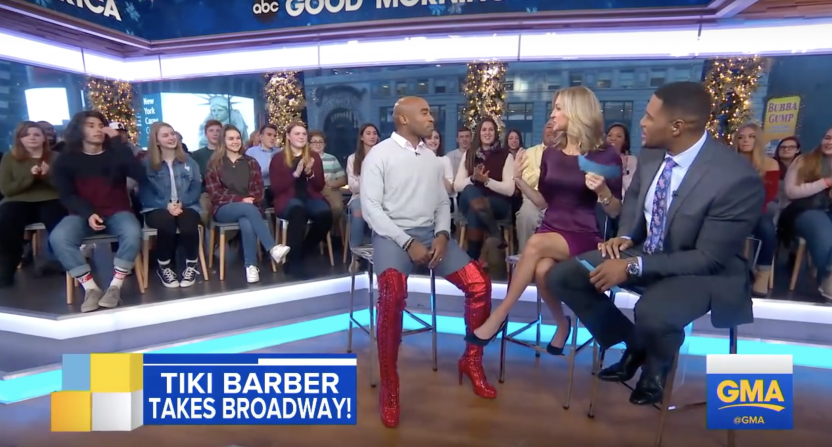 When you’re a well known pro athlete who played in the New York City market, you tend to have some post career opportunities that most other pro athletes are not going to receive. For Tiki Barber, who entered the sports broadcasting and news world after his retirement from the NFL in 2007, he has dabbled in acting in addition to hosting his own CBS Sports Radio show with Brandon Tierney. Now it appears that Barber will hit the stage and take on Broadway.

Barber was on Good Morning America and revealed that he is going to have a six week run on Broadway, starring in the Tony Award winning musical Kinky Boots. Cyndi Lauper wrote the music and Barber revealed that he will be doing some singing and gave the audience a little sample.

Tiki Barber hasn’t been afraid to try new things and is giving Broadway a shot. He doesn’t seem like he’s a bad singer and he’s certainly trying to pull off wearing a pair of knee high level, high heeled boots. It’s going to be difficult having a three hour radio show and taking part in a musical right after but maybe Tiki can do it. Barber’s run on Broadway runs from January 21 to March 3.