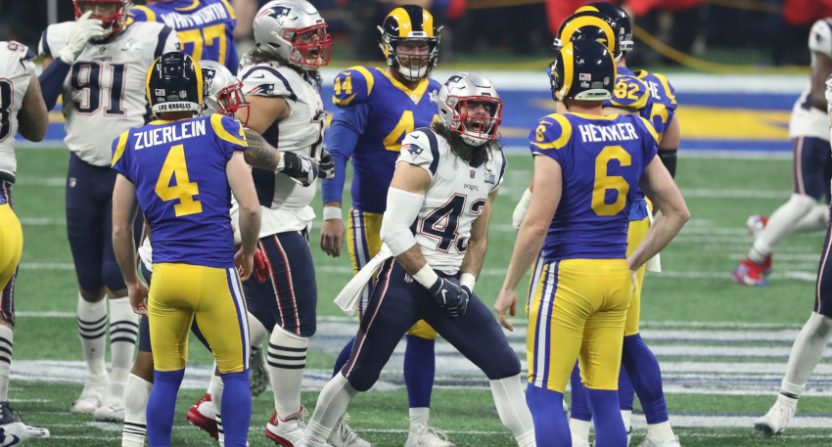 It turns out the Super Bowl viewership did not, in fact, bounce back for Sunday’s Super Bowl LIII. In fact, this year’s average viewership wound up even lower than last year’s 103.4 million, which was the worst viewership since 2009’s 98.7 million. Well, this year’s game finished with a total audience delivery average of 100.7 million viewers across all platforms, including CBS’ own streaming (which had some hiccups) options, Verizon mobile properties, NFL digital properties, and ESPN Deportes television and digital properties. And while that was a streaming record (with an average minute audience of 2.6 million), Kevin Draper of The New York Times tweeted that CBS said just 98.2 million watched on CBS alone. Here’s more from CBS’ release:

Super Bowl LIII was watched on CBS in all-or-part* by 149.0 million (Persons 2+) viewers on an all-or-part basis according to Nielsen’s Fast Total Audience Estimates.

Streaming coverage of Super Bowl LIII set viewership records, with the game streamed across more platforms than ever. Across 7.5 million unique devices, up +20% from last year, viewers consumed more than 560 million total minutes of live game coverage, up +19% from last year. The average minute audience of 2.6 million viewers during the game window is up +31% year-over-year.

These numbers are in line with the 44.9 overnight rating, also the lowest since 2009. And while the New Orleans boycott had a significant impact in that market, that only represented about 175,000 households (or 0.15 national ratings points), so that wasn’t the main reason for this. The low-scoring 13-3 game was a much bigger problem, along with perhaps some Patriots’ fatigue. But it’s notable that this went against the season-long ratings trend (a rise of about five percent over the dismal 2017-18 season), and against the trend from the conference championship games (up 26 percent for the AFC game and up 10 percent for the NFC game), and that it was below every single one of our staff predictions. Oh, and this looks even worse if you add in streaming numbers for some of those previous games, or if you consider only the linear TV delivery (which was the lowest since 2008):

So, that would make this a drop of about five percent from last year’s all-inclusive numbers. And it’s odd to see regular season ratings up by that much, but Super Bowl ratings down by that much.

Of course, there was some streaming success here for CBS. And there was some CBS All Access success; it “surpassed prior single-day records by +84% in subscriber sign-ups, +46% in unique viewers, and +76% in time spent on CBS All Access across all content and digital platforms.” Maybe some of those new subscribers will stick around past the free trial period, and at any rate, it’s useful for CBS to have an opportunity to promote their extra pay service and get some new sign-ups for it. But overall, this wasn’t a great number for CBS or the NFL.

That’s not necessarily indicative of anything going forward for the NFL. A lot of this was likely about the low-scoring game, which had the lowest-scoring first half (3-0) in a Super Bowl since 1975 and the lowest final score in Super Bowl history. And it’s possible that the general ratings rebounds this year will return next regular season and next Super Bowl. But these ratings certainly validated advertisers’ skepticism; CBS’ ad prices (estimated at $5.1 to $5.3 million for a 30-second slot last week) were about flat versus last year, the first time Super Bowl ad prices stayed flat year-over-year since 2010 (after that low-rated 2009 Super Bowl), and even at those prices, CBS ran an awful lot of in-house ads (33 versus 19 by NBC last year, a 74 percent increase). We’ll see how the ratings do next year, and how the advertisers feel about Super Bowl LIV, but this definitely wasn’t a great moment for the NFL on the audience side.