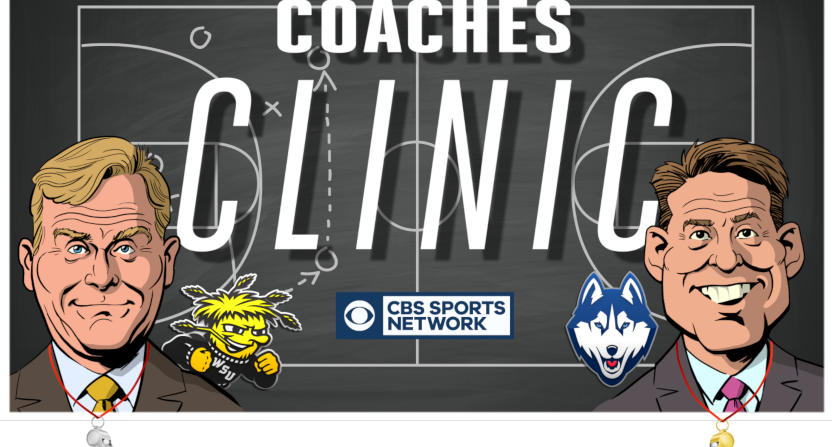 The college games that have aired on Facebook Watch, especially through CBS Sports and Stadium’s Conference USA deal, have led to some interesting broadcasting approaches thanks to the lack of commercials on those games. Stadium has done extended sideline reports, polls, and more for some of its Facebook Watch broadcasts, while CBS miked up their producer and director and conducted tours of their broadcast truck during a Middle Tennessee-Marshall football game this fall. Interestingly enough, CBS is now taking an innovation that started as a Facebook Watch idea (on a Middle Tennessee-Marshall basketball game last year) and bringing it to CBS Sports Network this Sunday (Jan. 12, at noon Eastern) for a game between the Wichita State Shockers (currently #23 in the AP poll) and the UConn Huskies. That would be the Coaches Clinic.

The Coaches Clinic idea features Pete Gillen and Steve Lappas (both long-time NCAA Division I head coaches before they went into broadcasting) as well as play-by-play man Andrew Catalon. Gillen has spent the past week embedded with Wichita State and will be calling the game from next to their bench, while Lappas has been embedded with UConn and will be next to their bench. Both will have Telestrators to illustrate specific plays. CBS Sports’ vice president of remote production Steve Karasik spoke to Awful Announcing about this broadcast this week, and said last year’s Facebook Watch version of this (featuring the same announcing team) worked so well that it made sense to bring it to TV.

“Last year, we started a partnership with Facebook to produce Conference USA basketball games for them, so it was CBS Sports Network college basketball on Facebook Watch. For these specific games, there are no commercial breaks, so we needed to brainstorm ideas and fill the time where there’s two-minute breaks on the court eight or nine times a game. And we came up with the idea when speaking to some of our analysts that are former coaches, like Pete Gillen and Steve Lappas.”

“What they do during a normal telecast is give their opinions as a former coach, but they always have more to give. They want to talk more strategy, do more Telestrator [segments] and explain what’s going on. And because of the normal limits that are in a traditional basketball telecast, they can’t do that. So in a game where we had no or limited commercial interruptions, this would be a vehicle to let these guys show more of what they know.”

“And we already approached the game as if they were coaching each of the teams. So we came up with this idea, and both Steve and Pete loved the idea and thought it would be a great chance to do something a little different. And then when we did the game [Middle Tennessee-Marshall] last year, it worked out better than I had even hoped. The great thing is that Steve and Pete, in addition to being great former coaches, each have unique, very entertaining personalities. And the show, along with Andrew Catalon who did the play-by-play for the game, had a great quality of entertainment as well as basketball teaching and expertise all rolled into one.”

“Since it did so well and we were so happy with the way that show went, the natural progression was ‘Well, it would be great to get this show on CBS somehow.’ On CBS Sports Network, we obviously have a little more flexibility with our commercial format than we might have on broadcast CBS. And we thought this would be a great opportunity to try this, but let a bigger audience see it. And that’s where this game came into play.”

Karasik said Sunday’s broadcast will be largely like the Facebook Watch one; it will feature some limited commercials, but those will be in a double-box format, so viewers will never completely be taken out of the arena.

“It’s really pretty similar. We are going to have a few commercials, we’re saying limited commercial interruption. The only commercials that we’re going to run in-game are going to be 30-second double-box commercials; it’s becoming a part of sports television that at least keeps the fan in the arena the whole time. We still have some sales obligations to get in, but other than that, it will be the same.”

Karasik said a lot of the credit for this happening should go to lead producer Scott Brandwein.

“Scott Brandwein, who’s one of our lead producers here for CBS Sports Network, produced the game last year and is producing the game on Sunday. He did a tremendous job last year, which lent itself to us being able to do it again. He’s the one that’s been on the frontlines, obviously along with our management team, convincing the schools that this is something that they should be a part of. Without Scott, none of this happens.”

He said the sales team also deserves a lot of credit for getting on board with this idea.

“And I will praise our sales and programming team; problems that could happen are ‘How do we sell this game, how do we get our commercials, how do we get the breaks in that are promised to our affiliates?’ But our sales and programming team have been in lockstep with production and my team and have really been flexible in figuring out a way to make this work for television purposes. Ryan Briganti, who’s our VP of sales for CBS Sports Network and who’s a huge college basketball fan, loved the idea and made it possible to do it this way.”

Why Wichita State-UConn? Well, Karasik said there were a few key factors in that choice; programs viewers would be interested in, prominent head coaches, and coaches, programs and conference executives that would be willing to give CBS the access needed to make this work.

“We wanted to pick a game where we had coaches that were well-known and that the audience could identify with. It’s a great game in itself, Wichita State at UConn. We’re partners, obviously, with the American Athletic Conference, and they have always been very, very supportive of us trying new things in our broadcasts, both in football and in basketball. So we knew we had a good shot of having the conference approve us. And for each school, with Gregg Marshall at Wichita State and Dan Hurley at UConn, they’re obviously two big-name coaches that would lend itself to this, would give this broadcast a little more juice than it might have with some coaches that might not be as well-known.”

“And Gregg Marshall has worn a microphone for us previously, I think two other times, for CBS Sports Network games, and he’s been a great partner for us. So we were confident that Gregg would be supportive and Wichita State would have the confidence in us to let us into their program and know that we would do right by them. UConn was a little bit of an unknown factor; we know that Coach Hurley is protective of his program and wants to make sure that we cover things the right way. But the relationship that we have with the conference as well as UConn lent itself to them having trust in us that we’re going to do this in a way that is entertaining and informative for the viewer at home, but at the same time is respectful of their basketball program.”

A regular worry many teams have with providing extra access to broadcasters is if that leads to secret information (such as particular secretive plays or assignments) becoming public. And with Lappas and Gillen embedded with these programs for most of a week, they’re probably going to pick up quite a lot; that could be worrying for the programs involved, and it could have made something like this a tough sell. But Karasik said the respect the coaches in question have for Gillen and Lappas helped overcome that.

Karasik said the coaching background Lappas and Gillen have also helps them decide what’s acceptable to relay on air, and the focus isn’t going to be entirely on specific plays, but also on how the different players on each side fit into their team.

“These coaches, obviously, Coach Gillen and Coach Lappis, they’re not that far removed from their coaching days. They have a good sense of what is okay to share and what isn’t. And we’re not really trying…obviously, during the game, our coaches will have been at practice and been at team meetings and have a sense of what each team is trying to accomplish and how they play, and that’ll show up in the broadcast. But really, being embedded with the teams to me…as important as knowing the X’s and O’s is also getting to know the team better.”

“Who is the team leader? Who’s the one that’s going to yell at them in the locker room if they’re not playing well? Who’s the person on the team that keeps everybody loose and tells jokes on the team plane? I think giving that insight is almost as interesting and vital as to know why a certain team is going to want a certain defense at a certain point in the game. And I think them being not far removed from being coaches themselves gives them a good idea of what is okay to say, and what is something that the team would rather remain private and more strategy-based.”