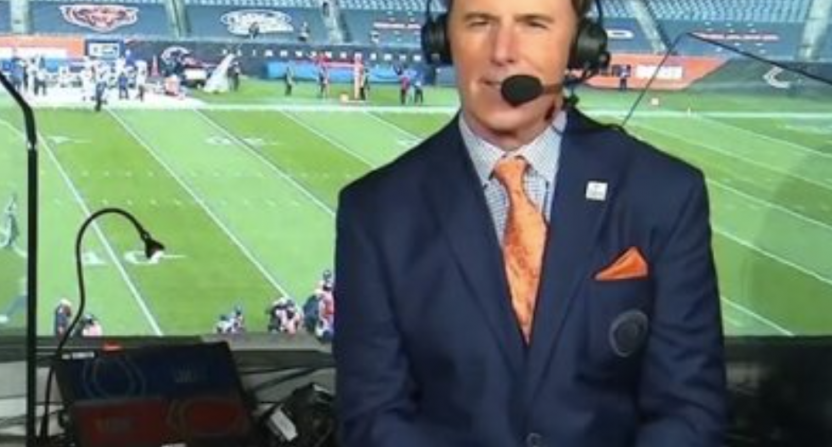 Rich Gannon is reportedly done as an NFL on CBS analyst after sixteen seasons in the booth.

The move, reported by the New York Post’s Andrew Marchand, leaves an open analyst slot for CBS, although it remains to be seen just where it will fall in the lineup, much less who will fill it.

Gannon, the former MVP quarterback, will not have his contract renewed in the first move of NFL TV free agency. When contacted by The Post, a CBS spokeswoman confirmed the news.

CBS has not set Gannon’s replacement just yet. The two internal candidates figure to be Adam Archuleta and James Lofton.

Before last season, CBS started to tip its hand on the 55-year-old Gannon when it split him from his longtime partner, Kevin Harlan. While CBS doesn’t officially designate its depth chart, Harlan and Trent Green did the third best game most weeks, while Greg Gumbel and Gannon received the fourth most-watched matchup.

Gannon joined CBS in 2005 shortly after his retirement from the league, and has been a steady presence throughout his entire tenure. He ould look to pivot to college assignments, or take some time off. Or just retire completely now! He’s certainly earned it; sixteen years as an analyst on the back of eighteen years in the NFL is a heck of a life in football.

As to his replacement: for the first time in years this offseason didn’t feature a lot of broadcasting speculation, thanks in large part to ESPN seeming content to stick with their newly-formed Monday Night Football booth. Sure, Fox added Greg Olsen, but that and whatever NBC does with Drew Brees (should Brees make his expected retirement announcement) are moves that have been in the works for years. This CBS opening, though, doesn’t come with any obvious replacements.

Marchand mentions Archuleta and Lofton as internal candidates to move up a rung or two on the assignment ladder, sure, but that would still mean CBS has an opening for a new analyst. If they try to replicate their Romo success, would they target another recently-retired quarterback? This is wildly speculative, but Philip Rivers just retired; does he have any interest in joining the world of broadcasting?

Jay Cutler was at one point set to join Fox, and mentioned on a reality show that aired last spring he’d met with a few networks (one of which was reported to be CBS.)

There are obviously many, many other directions CBS could go here, too, but this move feels like it’s been planned for a while, which means they might have an ideal replacement in mind already as well.