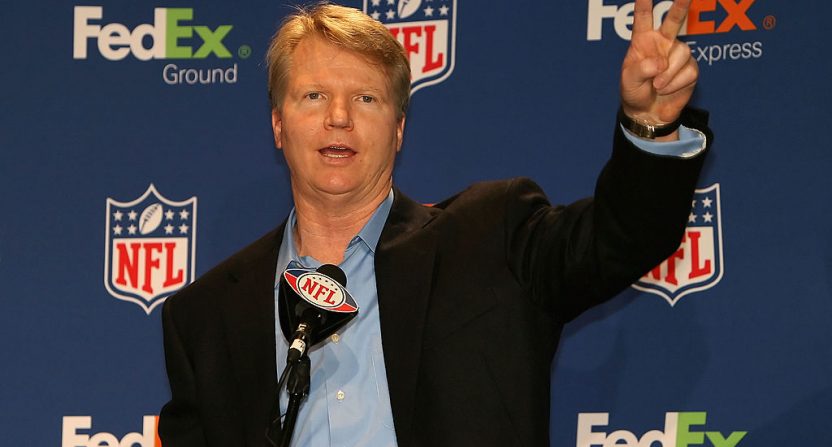 It turns out that Phil Simms will be staying with CBS and moving to the studio, but the transition has been anything but smooth. Following Simms’ replacement by Tony Romo on CBS’ top NFL broadcast team, he told Gary Myers of the New York Daily News “I am not done” on April 7, but his landing spot didn’t become clear until Wednesday, when numerous media reporters in on the embargo all simultaneously revealed he was heading to The NFL Today. There, Simms will be filling the chair vacated by Tony Gonzalez (who’s moving to LA and may take a role with Fox). Sports Illustrated‘s Richard Deitsch talked with Simms, who said this was a blow to his pride, but he’s excited about his new role:

“Listen, I didn’t make any comments for a lot of reasons and you want to sit there and think about it,” Simms said by phone on Wednesday. “Initially was my pride hurt? Absolutely. Of course it was…So it took a little bit. Not long. I started thinking about it in a positive way and then I became excited about it. [CBS Sports Chairman] Sean [McManus] had talked to me over the years about maybe going into the studio. I now get to follow the league like I want to. That was probably the most frustrating thing about my job. You do one or two games a week, you can’t really pay attention to the other teams like I wanted to do. When you do games, you are all-in on those games. On Inside The NFL, I get to say things about stuff that I never get to say in a broadcast.”

And McManus told Deitsch he’d been talking with Simms about this for years, and thinks he’ll shine in a studio role.

“I think Phil will be a terrific addition and it will elevate the show,” said McManus. “I think anyone who has seen Phil on Showtime will appreciate what a terrific studio analyst he is. He is a man who has really strong opinions and he is not afraid to mix it up with other staff members in a respectable way.”

That’s all well and good, but the way this played out made it quite clear it wasn’t a natural shuffle, and it meant that Simms wasn’t able to save face. If CBS had been able to convince Simms to go to the studio before they officially brought in Romo, it would have been easy to portray this as the best fit for both. Instead, it’s clear that Simms still wanted the top analyst role, was bumped out against his wishes, and settled for studio work only later when it became clear it was the best remaining option for him.

Does that really matter? Not necessarily. There are ways to see this as a positive for CBS, as they made a bold move to install a broadcaster they saw as an upgrade (we’ll see if Romo actually proves to be one or not), one there was competition for, and did so decisively without waiting to plan everything out. They also clearly won the power struggle with Simms, who wound up taking the role he wasn’t initially thrilled with.

So CBS winds up with the A-team commentator they want and with Simms sliding into the vacant The NFL Today slot. The only negatives for them are criticism from people like Chris Simms who think they should have kept Phil in the top broadcasting role as long as he wanted it, and criticism from those like Michael McCarthy who think they shouldn’t have made any move until Simms’ landing spot was clear. Sure, the optics might have been better that way, but if Simms was unwilling to take the studio role at that point, it’s hard to really blame CBS for making the move they wanted to with Romo and letting things shake out however they would with Simms.

The bigger impact of not doing this smoothly seems to be on Simms rather than the network. If he had been willing to head to the studio show at the time they brought in Romo, it would have been easier to sell this as a move he chose to make (even if that wasn’t at all the case). It wouldn’t have provided the current perception of “Ah, he’s only there because they didn’t want him calling games any more,” and it wouldn’t have indicated that he wasn’t able to find a better landing spot elsewhere.

Still, that doesn’t necessarily mean all that much either. Most viewers probably don’t know or care about the behind-the-scenes machinations that got Simms to this spot, so it will be all about what he actually does on The NFL Today. And maybe the studio role will be a good fit for him, and maybe he’ll draw less fan and pundit criticism there than he did in the booth. In the end, this probably works out okay for all parties, even if it wasn’t a smooth transition to get there.