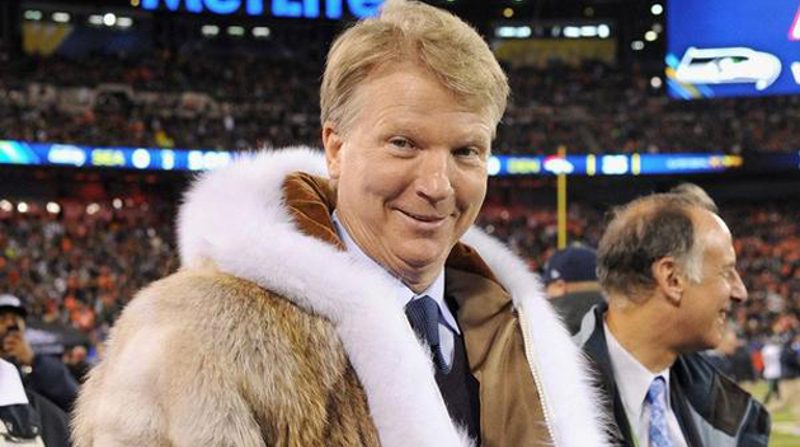 We don’t yet know where Phil Simms is going to land following his replacement on CBS’ top broadcast team by Tony Romo, but it sounds like he’s not ready for retirement just yet. Simms broke his silence with a text to Gary Myers of The New York Daily News, saying “I am not done.” Some had speculated the 62-year-old Simms might just opt to hang up the microphone, but it looks like that isn’t the case, at least not right now. So the big question is where Simms will wind up.

Simms is under contract to CBS, and there could still be a fit for him there. For one, pre-game show The NFL Today has gotten smaller now that Tony Gonzalez has left, so it might have an opening. It could be attractive for Simms, as booth to studio isn’t as much of a clear demotion as #1 booth to #2 booth (or worse), and the show is shot in New York, close to his New Jersey home. However, Mike Florio notes at Pro Football Talk that CBS would likely have already announced that if that was their plan for Simms, and that they may be hoping either he accepts a slot on a lower broadcast team or takes a settlement to go elsewhere:

If, in our view, CBS viewed Simms as a key member of the ongoing NFL coverage, the plan for his future would have been announced at the same time Romo’s arrival was unveiled.

Reportedly under contract for two more years with CBS, the two sides could end up in wrestling over what the network will pay him to go away. Barring specific contractual language that limits his assignment to the top broadcasting team, CBS could appoint him to any of the other rungs on the ladder, relegating him to the lowest-level game every week. He’d still be paid the same amount, but the blow to the ego could be more than Simms is willing to endure, which could cause him to accept a settlement of, say, 60 cents on the dollar in order to go away.

As PFT previously pointed out, it makes sense to put Simms in the seat Tony Gonzalez recently vacated on the pregame show. But if CBS and Simms wanted that, it presumably would have already happened.

Wherever Simms goes from here, it clearly will be a step down. The way CBS has handled the situation strongly suggests that they hope he eventually steps out of that specific network entirely, with a severance package barely large enough to afford Joe Namath’s coat.

It does seem interesting that CBS has so little apparent interest in Simms now despite their defense of him from critics as recently as last September, but that’s the business, and they may well still like Simms, just not as much as Romo. One other CBS-linked role is Simms’ work on Showtime’s weekly Inside the NFL. Showtime is owned by CBS, and Simms has been on that show since Showtime took it over (following its cancellation at HBO) in 2008. If Simms wants to stay in broadcasting, but in a less-time-intensive and still high-profile role, it’s possible a deal could be worked out where he just does Inside The NFL.

Myers has lots of other possibilities for Simms, though, and the one he mentions about WFAN is perhaps particularly intriguing:

Mike Francesa is hanging up his headset in December, so The FAN needs an afternoon drive time host. How about moving [Boomer] Esiason to the afternoons and teaming him with Simms? They have great chemistry. The show would be over before Esiason heads over to MSG for the Rangers games. One problem: “Inside The NFL” tapes on Tuesday afternoons, so there would be a conflict. Maybe the Francesa show is downsized from 1 p.m. − 6:30 p.m. to 3 p.m. − 6:30 p.m., which would solve the problem. Or perhaps Showtime can tape on Tuesday mornings. Simms could potentially team with Esiason on “The NFL Today,” “Inside The NFL” and WFAN. How long before they would get sick of each other?

What would happen to the [Craig] Carton half of Boomer and Carton if Esiason moves to the afternoon? Chris Christie was snubbed by his buddy Donald Trump for a key White House appointment, but would love to work with his buddy Carton. Christie had been lobbying to replace Francesa. Good thing he wouldn’t have to take the George Washington Bridge to get to the radio station from New Jersey. Carton and Christie as a tandem would be…well…interesting.

That’s a fascinating idea that combines the Chris Christie to WFAN rumors with a landing spot for Simms, and in a way that makes some sense (Christie as a morning co-host with his friend Carton, something he’s already done as a frequent guest host, seems much more logical than having a sports talk rookie carry the drive-time show on his own). The big question there is if Simms would want to do a daily radio show and would want to (and be able to) talk sports other than NFL. And there are other NFL-only options for Simms, from Fox to Westwood One Radio. We’ll see where he ends up, but for now, we now know that he doesn’t plan to go away quietly.