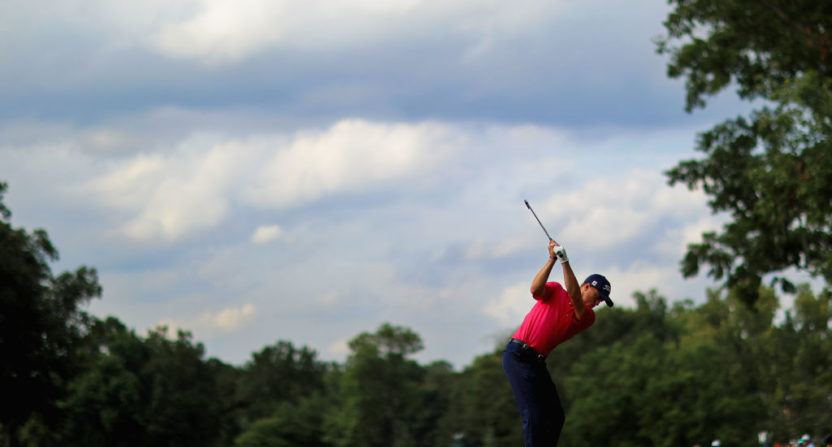 Last year at this time there were discussions about the PGA Tour possibly looking at kicking the tires on leaving their current television deals with CBS and NBC early. The contract runs through 2021 but the tour had an opt-out clause to renegotiate and discussions were had with NBC and Fox.

It seems like forever since we’ve seen a big professional sports rights property switch networks with long-term deals going into the 2020s and that looks like it will continue with the PGA Tour staying put.

Via Golf Digest comes confirmation that the Tour did not exercise its right to opt out and will continue with CBS and NBC through the lifetime of their current deal:

A tour spokesperson confirmed to GolfDigest.com that the organization chose not to opt out of its current television deals with the two networks, something it had the option to do as soon as 2018. The deadline to do so was Sept. 1.

The tour’s deal with Golf Channel, meanwhile, has no opt-out clause and is signed through 2021.

An earlier Sports Business Journal report said the tour had reached out to several outlets—including Fox, ESPN and Turner—to gauge interest in a potential deal, or in potentially helping the tour launch its own channel.

When asked earlier about the possibility of the tour creating its own network, however, commissioner Jay Monahan indicated that’s not something that is in the immediate plans.

The Golf Digest piece goes on to state that in lieu of launching their own network, the PGA Tour may consider taking an ownership stake in Golf Channel once their deal also comes up in 2021. That concept makes a lot more sense than the tour trying to create a new standalone network to compete with Golf Channel, which has owned the “24/7 golf channel space” since its conception.

As far as the major networks go, it may have been tempting for the tour to see what was out there but I’m not sure many golf fans are clamoring for a change right now. CBS and NBC both do a great job broadcasting golf with deep, talented, and informed broadcast crews. Fox and ESPN have a limited presence right now in the sport, but as we detailed last year, it would take some serious rearrangements for both networks to fit the tour’s weekly schedule into their live sports offerings.

While scheduling and broadcast quality are major talking points, the decision likely comes down to one thing – money. Right now the PGA Tour is in a rebuilding phase and ratings haven’t been a great source of optimism over the past few years. But with many young stars coming on the scene, perhaps the Tour can show enough of a rebound over the next few years to justify the increase in rights fees they will surely be looking for.