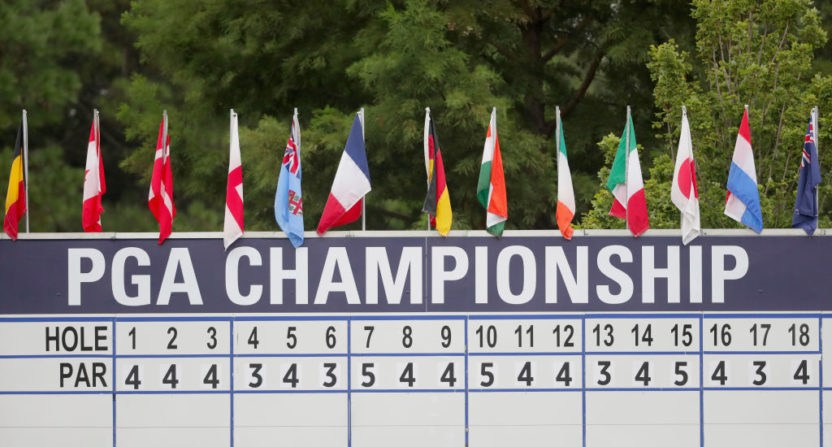 This week, the PGA of America announced that it will move the PGA Championship from August to May (either in the third or fourth week of the month) starting in 2019. Now this does three things. First it avoids the NFL which starts up with its preseason in August. Second, it also avoids the Olympics which the PGA Championship has to deal with every four years and had to move to July last year. And third, it allows golf to have major tournaments in consecutive months from April through June.

For CBS, one might think this is an inconvenience, but actually, this is something that the Tiffany Network wants. CBS Sports Chairman Sean McManus said in a conference call last week that he actually prefers having the PGA Championship in May:

“We love having the PGA Championship in August. I think we’ll love having it even more in May, quite frankly.”

Perhaps that was some foreshadowing from McManus in anticipation of this week’s announcement. But with the PGA Championship occurring in May, it gives CBS two majors back-to-back along with The Masters. Plus, with May being a ratings sweeps month, it can charge higher ad rates for the event.

CBS and Turner’s contract to air the PGA Championship expires in 2019, but negotiations will likely begin next year. While NBC would love to take these rights away and give Golf Channel another major, however, the Peacock is quite busy in May considering that in the timesframe that is being considered, it would carry the Preakness Stakes and the NHL Playoffs. It would be tough to slot it in for NBC.

With Turner carrying the NBA Playoffs in May, the PGA Championship would be a nice sports lead-in to games especially on Thursday nights. With ESPN usually carrying games on Friday nights, that would not be a concern, but this would give the CBS/Turner partnership to carry into May after the NCAA Tournament which usually ends in early April.

With most of the major sports properties locked up into the next decade and beyond, the PGA Championship is one of the few events that will have its contract expire before 2020. CBS/Turner would like to keep the status quo with the PGA Championship and it will be interesting to see what happens next year when negotiations begin.