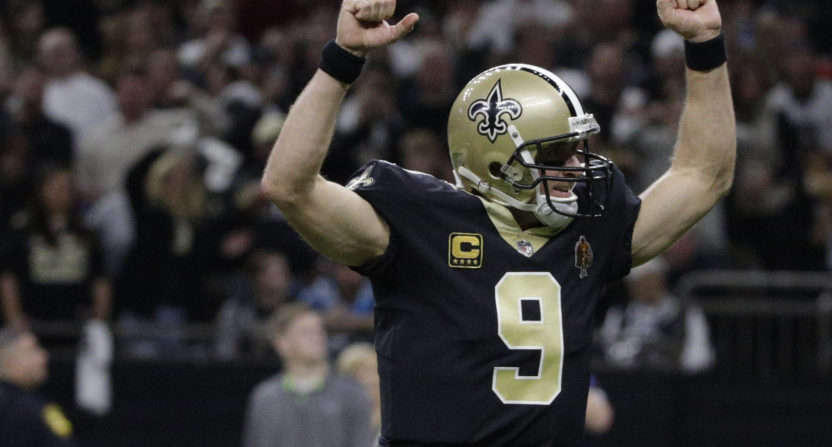 It was reported by Ad Age’s Anthony Crupi that the NFL lineal viewership during the just-ended 2017 regular season had declined by about 10% versus the year before. Of course, in the non-stop mainstream coverage of the league’s ratings woes over the past two seasons, there have been countless theories posited about why the numbers remain down. In fact, you are forgiven if it suddenly seems like old school Nielsen data – which is still the currency of the entire media world, whether we like it or not – has become this generation’s sabermetrics.

This weekend’s playoffs gave us an opportunity to look back on the season and see if the NFL has been able to turn things around (not really), while also looking for some bright spots in their TV ratings story (not as many as we’re used to). However, it’s also a moment to consider all of the aggrieved groups coming into 2017 to examine how much their anger impacted viewership. Did the campaigns for boycotts from Colin Kaepernick supporters and President Donald Trump’s base work? Are women still turned off after the domestic violence and sexual assault investigations of recent years? Is Roger Goodell still a repellent from New England Patriots fans?

The best way to truly understand who is or isn’t watching the NFL comes from more than PR spin and the target demographics for advertising sales, but to observe age combined with ethnicity and gender, the roots of all of the anger about the league these days.

As in past analysis, the NFL Network is excluded because of both its smaller footprint versus the league’s primary broadcasters (CBS, FOX, NBC and ESPN) and shared simulcasts with CBS and NBC through most of the season. Also not included is NFL RedZone because it is not nationally rated by Nielsen. Finally, it’s hopefully understood that fans are network-agnostic – if Sunday Night Football was on the Food Network, chances are that FOX will still lose the primetime battle that evening. 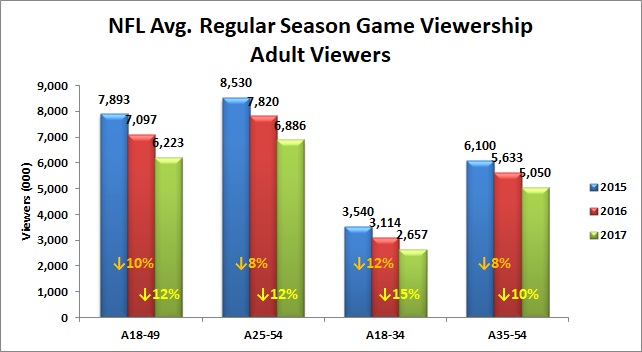 The reported decline of all viewers – including kids and teens – is a collection of drops across multiple groups, in fact, the 10% drop based on Nielsen data would be a loss of over 1.7 million total viewers for an average telecast in 2017, about 200,000 more than the drop one season ago. Yet, in relation to the networks and advertisers, the most important demographics are the major selling demos of Adults 18-49 and Adults 25-54. The 12% decline in the respective demos from 2016 to 2017 was a bit steeper versus the decline a year prior. As the other key demos of Adults 18-34 and 35-54, the declines are also bigger versus the previous year (more on those later).What’s highly notable is the unseen in this chart – since the 2013 season where the league shattered viewership records, the average broadcast has lost 3.6 million total viewers, likely a result of additional broadcast windows created from Thursday Night Football’s expansion, and the flood of issues that have plagued the NFL over the last four seasons.

Race and gender, per usual, both play larger roles in the shifting viewership than perceived. Female viewership didn’t ring as many alarms for the NFL or its broadcasting partners in recent years as they should have, especially in the aftermath of the notoriously bad 2014 offseason. The same could be said for African-Americans, whom comprise of the largest non-white ethnic group of fans, as Kaepernick’s exile from the league and the widening protests during the Star-Spangled Banner took root. Yet the fluctuations in both groups – along with the Asian and Latinx ethnic breaks – have been signs of ratings erosion for a while. All coupled with the mounds of mediocrity displayed on the field itself, and you can see how the slippage during the 2016 season was not an aberration. 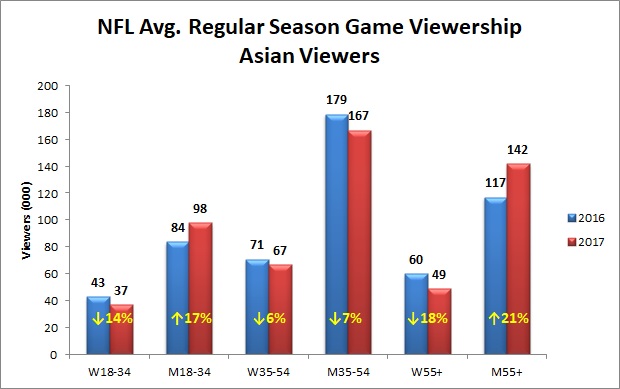 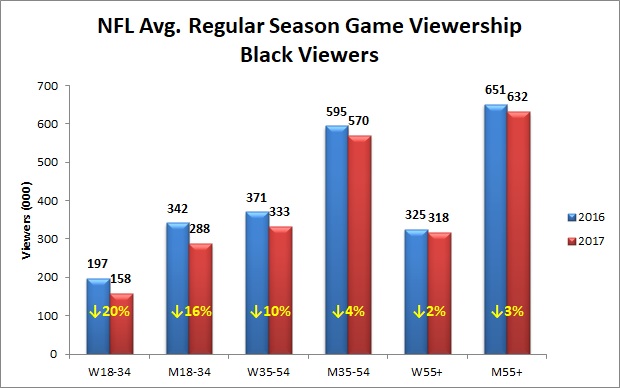 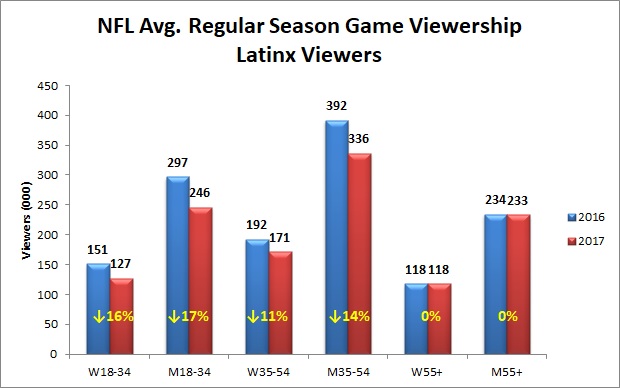 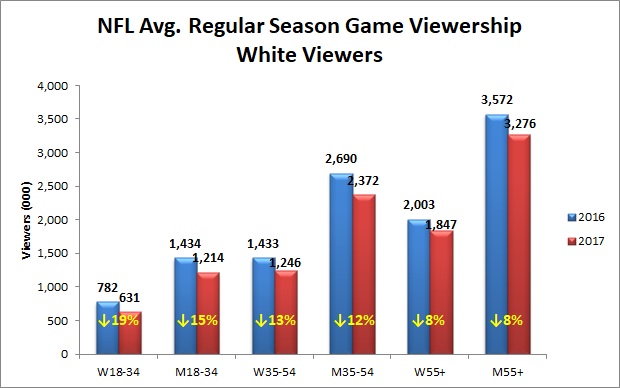 The charts clearly reflect the NFL’s continued problems with retaining viewers ages 18-34 (with the exception of the 17% increase among Asian men of the group). It’s been a sore spot going back to 2012, even as your friendly sports talk show hosts kept shouting about how the ‘NFL is king.’ Yet, those viewers went somewhere – in all likelihood they’ve gone online to watch the games or anything else their hearts desire. In fact, while demographic information of this depth is not readily available for online streaming or TV Everywhere offerings from cable operators, chances are that many of those lost younger viewers could be found there as well as illegal streaming websites.

Among the 35-54 age group, the declines are not as severe with each ethnic group as they were for the younger set, but they are still by and large double-digit declines.  These shifts are also related to the same changing viewing behaviors attributed to the under-35 demos, yet this group is also quite reliant on traditional television. Advertisers always want young audiences to promote their goods to, but the purchasing power and brand loyalty remains with their older peers.

Yet, the reason that observing the intersection of age, gender and race is once against strikingly clear in the above-55 grouping. The larger percentage swings for viewers of Asian descent come from being a much smaller part of the population, but growth with Asian men over 55 years old makes up for the drops among Asian women – a similar trend to their 18-34 cohorts. Black viewers in the demo – people who were going to pose the biggest challenge to the #NFLBlackout push that began over last summer – made up ground as the season progressed, but still posted slight declines. Latinx 55+ viewership was the lone area of stability for the ethnic group as it was totally unchanged from 2016. (Spanish-language network broadcasts, however, were not measured for this article.)

The low point, as was the case in 2016, resides among older white fans. The percentages are smaller than their younger counterparts, but that loss of over 450,000 still stings. Those missing fans make up 95% of the ratings decline of all viewers above 55 years old.

To put this all in greater perspective, 85% of the lost total viewership (1.5 million fans, including kids and teenagers) for 2017 comes from white NFL fans. In one way, it’s better than in 2016 where white fans made up 95% of that loss. In another, it’s proof that the minority fan base is completely overlooked as they tripled their share of the decline.

With an infusion of new blood in the playoffs thanks to Buffalo, Jacksonville and the Los Angeles Rams, the NFL and their broadcast partners are thirsting for new, far better ratings stories. It may be a challenge to shatter viewership records without Green Bay, Dallas, or a Manning brother. Heck, we may see America’s love for football tested with the mere possibility of a Jaguars/Falcons Super Bowl a month from now. Despite being the most popular entertainment company in America, with its playoffs set to capture national attention, the National Football League is still on the outs with plenty of sports fans from coast to coast.