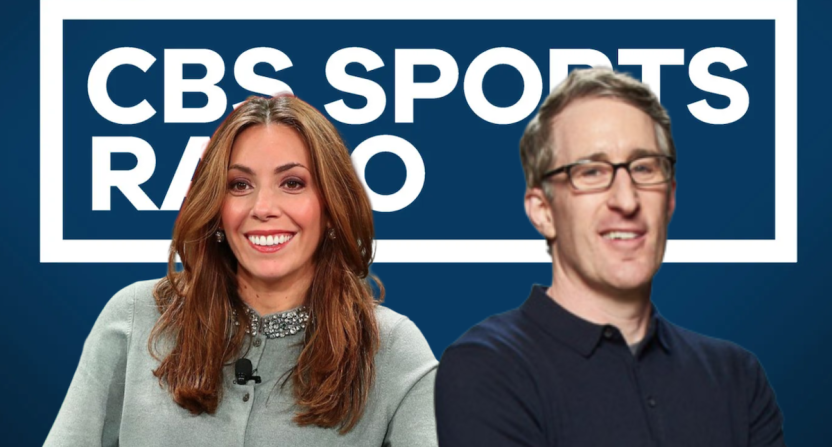 It’s almost like we’ve had a trade in sports radio. Not literally, but it nearly looks that way.

And one day later, Audacy announced its replacement for Tiki & Tierney on CBS Sports Radio and it includes a familiar face. Make that two familiar faces for fans of national sports talk radio. Maggie Gray and Andrew Perloff will be the new afternoon drive-time team from 3 p.m. to 6 p.m. ET beginning on Jan. 3.

In announcing her departure from WFAN, Gray said “her next chapter is about to begin” and it was teed up, ready to go.

Some of you might be thinking, “Andrew Perloff? Wait, McLovin’ from The Dan Patrick Show? McLovin’s leaving Dan Patrick?” Yes, indeed — that’s the same guy, not someone else with the same name. Perloff will stick with Patrick’s show until Dec. 23 and then he’s off to do his thing with CBS Sports Radio.

Patrick announced the move on his show Friday, explaining that Perloff has been driving at least 90 minutes from Brooklyn to Milford, Connecticut and back every day, joining a tight-knit crew already established from Patrick’s ESPN Radio days.

We have some bittersweet news. @AndrewPerloff is leaving us. Dan shares the details… pic.twitter.com/mk0JODBIVI

“He never complained and came in, always with ideas, good mood, had fun, and been around us a long time,” Patrick told his listeners. “12 years. A long time. I had the under. I didn’t think we would keep you that long, but 12 years. Pretty good stuff.”

Perloff, who’s been one of “The Danettes” since 2009 and previously worked at Sports Illustrated and NBC Sports Radio, expressed thanks for the role he’s had on the program.

Perloff added to his remarks on social media later.

Now that it's out, I want to express my gratitude to @dpshow @PaulPabst @HiMyNameIsSeton @brooklynfritzy. Incredible honor to be part of this team and share the fun with so many fans. They're stuck with me for a few more weeks! (Terry Crews not part of this, just in photo) pic.twitter.com/eyqRxh6FMN

Hey, maybe Terry Crews will have something to say later on, McLovin’! Don’t count him out. There could be some special pec flexes for you, maybe as a holiday gift.

Until then, plenty of sports media colleagues responded with congratulations to Gray announcing the new show. Here’s a sampling:

Well this is amazing. I remember when you had offices next door at the old SI building.

Wow – wishes and hopes for success and happiness in this new (ad)venture – this gonna be fun – and hi you guys. pic.twitter.com/pFNqXqmh0d

Prior to joining WFAN, Gray had a six-year run at CBS Sports Radio from 2013 to 2018. Additionally, she appears as an analyst on SNY’s Baseball Night in New York show. As mentioned above, Gray was also previously at Sports Illustrated where she hosted the SI NOW digital program for SI.com. During her career, she’s also worked at MSG Network, NBA TV, MLB.com, and Westwood One.

“We’re excited to grow Maggie’s footprint to a wider national audience on CBS Sports Radio and welcome Andrew to join her as co-host,” said Spike Eskin, CBS Sports Radio and WFAN vice president of programming in Audacy’s official announcement. “Together, Maggie and Andrew will deliver a fresh weekday show for our listeners, adding another must-listen program to the station’s impressive slate of content.”

Thank you for all the kind words and so happy to hear all the love for the Dan Patrick Show. So excited for what's coming next.

As Perloff mentioned, his show with Gray will debut Jan. 3 on CBS Sports Radio, the Audacy app, and Sirius XM channel 158.