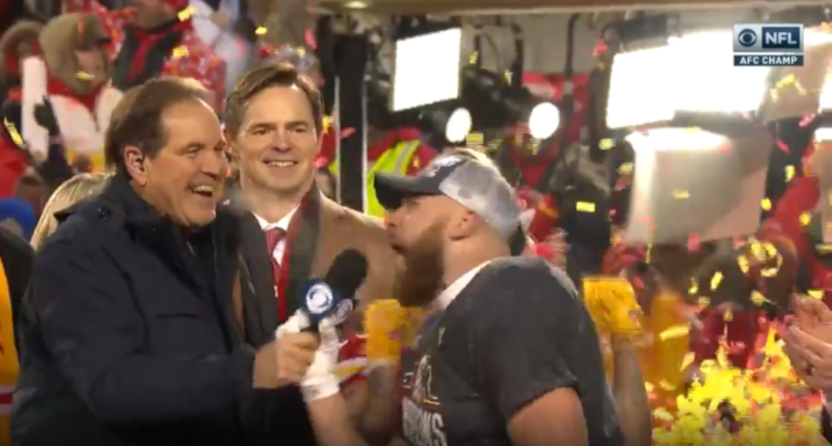 On Tuesday’s edition of The Dan Patrick Show, Nantz called in to talk with Patrick on a variety of subjects, but maybe the most interesting segment came from his comments on what happened in the lead-up to those Kelce comments.

A few selected comments there from Nantz:

“Well, Dan, you have to FIGHT FOR THE RIGHT TO PARTY!…I have to tell you, I was insubordinate there. You mentioned that you have voices in your ear, and I had [lead producer] Jim Rikhoff, who I dearly love, and I’m sure he had people behind him that were screaming to get off the air. And Jim kept saying, as I was talking to Patrick Mahomes, ‘This is it! This is it!’ And I’m looking past Pat and I see Tyrann standing there, Tyrann Mathieu, and Travis, and Travis had already tipped me off that he wanted to say something. And what am I going to do? They just won the AFC championship, I’m not going to blow these guys off. I’m not exactly sure what the rush was, and I’m normally good at following instructions, but on this one occasion, I think I said something about ‘I’ve got to get it back to the studio, but hey guys, congratulations,’ and Tyrann just said ‘Thank you,’ but Travis, Travis just went off, and it made the whole thing great.”

Nantz then tells Patrick he’s done these kinds of post-game presentations seven times at the Super Bowl, 16 times at AFC championships, and 34 times at the NCAA basketball championship game, plus 32 at the Masters and plenty of NCAA regional finals. He then goes on to talk more about Kelce’s comments, and how he was initially worried Kelce was going to drop a f-bomb on national TV (to more than 41 million people, to boot):

“Travis’ moment was pretty darn cool. That was different. I actually have to confess, when he grabbed the mic, and I held on for dear life as you said, because you’ve got the network in your hands, when he started to say the word ‘Fight,’ the f seemed to take a little longer than normal. I had a lot of thoughts racing through my mind, and I did think somewhere in that millisecond, there was a synapse or something that was telling me, ‘Oh my god, I disobeyed, I was insubordinate, and I walked right into the f-bomb right here on national television.'”

Fortunately for Nantz and CBS, that wasn’t what Kelce had in mind. But it’s certainly notable to hear Nantz talking about feeling pressure to get off air, and then feeling worried that Kelce was going to drop an f-bomb. It all worked out, though, and we got one of the more memorable post-game interviews in a while as a result.

The rest of Nantz’s interview with Patrick is interesting as well, including a discussion about CBS analyst and pending free agent Tony Romo. Nantz says he’s talked with Romo about that, and “certainly I’m hopeful, prayerful it works out” and Romo stays with CBS, and “I wish for him the best that he can do, but he is loved at CBS by a lot of people, no one more so than yours truly. …Hopefully this will be something that we can do together for a long, long time.” But the conversation about the post-game interview with Kelce is particularly fascinating, and it’s a good look behind the scenes at just what happened in the run-up to that.