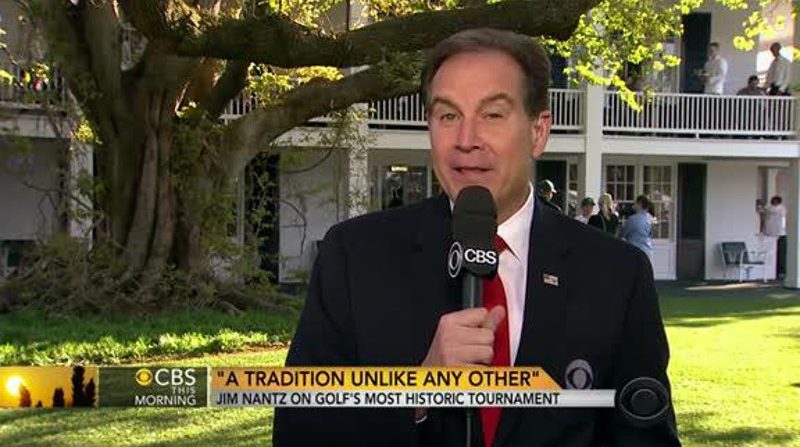 It’s a massive week for CBS’ Jim Nantz, who went right from calling the Final Four to heading to Augusta to call the Masters while learning his network was set to announce the replacement of his NFL on CBS analyst Phil Simms with rookie Tony Romo. Rick Maese of The Washington Post has a big profile on Nantz, and while there’s a lot of interesting material in there about Nantz’s positive spin on sports, plus comments on Nantz from the likes of Mike Francesa and former president George H.W. Bush, the most fascinating part may be about Nantz’s 2012 proposal and wedding, which demonstrates he’s just as much of a sentimentalist off-air as he is on-air.

We covered at the time how Nantz’s wedding took place on Pebble Beach’s famed seventh hole and featured a star-studded guest list (including Bush, Arnold Palmer, Robert Kraft and Tom Brady). Still, the details Maese includes are remarkable, and they’re an interesting look into the overall sentimental side of Nantz Maese focuses on:

Nantz married Courtney, his second wife, in 2012. He proposed to her at the Bush compound in Kennebunkport, Maine. The pair walked to Walker’s Point, where, as a gift to the 41st president, Nantz and a friend had installed an 800-square-foot putting green called “41 National.” He stashed an engagement ring in one of the holes and kept waiting for Courtney to sink a 10-foot putt.

When it came time to picking a wedding venue, Nantz knew what he wanted: the seventh hole at Pebble Beach.

“When I was dating Courtney, the first time I ever took her out there, for whatever reason a rainbow was draped right over our heads,” Nantz recalled. “It was just the most magnificent, vibrant rainbow. It spoke to me, I felt like it was — I get carried away, but I took it as a sign that fortified my feelings. It felt like a message.”

So they got married on the seventh hole. The weather was perfect. Arnold Palmer was there. The saxophonist Kenny G played. A flock of seagulls soared along the horizon as the two exchanged vows. They moved into their new home that same day, and Nantz later turned his back yard into a half-scale replica of the seventh hole, from tee box to green, with Sunday pin placements, bunkers and the exact topography. A host of golfers have hit balls there, from Palmer to Nick Faldo to Phil Mickelson.

That’s pretty amazing. I’m not sure I would have pegged Nantz as a Kenny G fan, but why not? That definitely fits in with the sentimental vibe.

The wedding details, and the details about Nantz’s replica Pebble Beach hole, match the rest of Maese’s profile of Nantz as someone who truly loves sports (especially golf) and embraces the sentimental side of them, which fits in with rainbows and Kenny G. It suggests that Nantz’s sentimentality is who he is, whether he’s on the air or not. Being sentimental isn’t always a boon for a broadcaster, of course; Nantz has taken criticism for being too soft on sports leagues, players and organizations like Augusta National, and some of that is well-deserved. However, there is some merit to his approach as well, especially if it’s who he is rather than something forced. Here’s what he told Maese about it:

“The sentimentality that people see and hear in my commentary and sometimes ridicule, parody or just don’t like — that’s okay,” he said. “We’re all wired differently. I think about that a lot. I can’t explain it. That’s just what runs through my blood. It’s just the way I look at the world. It’s not any kind of attempt to create synthetic drama. It’s just what’s really in my heart.”

There’s something to be said for sticking to what you want to do, and it’s certainly worked out well for Nantz. He has many of the biggest gigs in sports broadcasting, which helps him afford a Pebble Beach wedding and a house there with a replica seventh hole, and has also helped him make many of the connections referenced in that piece. At 57, too, he should be able to hold those gigs for quite some time, and to keep bringing that sentimentality to his calls. Like it or not, it seems likely we’ll hear “Hello, friends” plenty more times in the years to come.