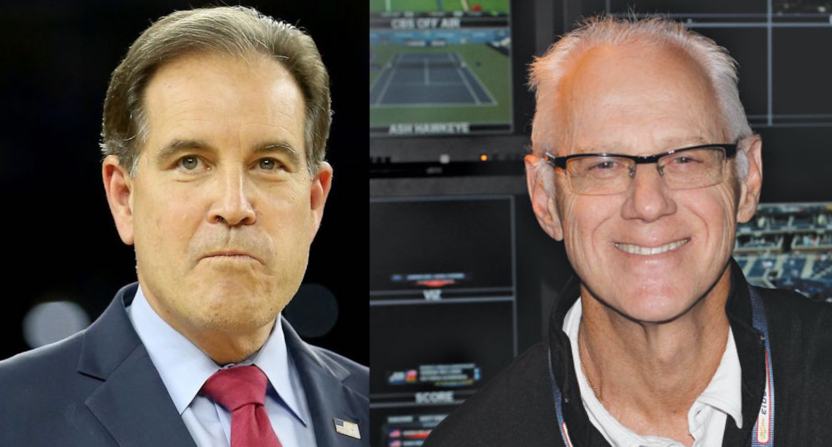 As UMBC was pulling off what many thought was impossible, becoming the first 16 seed to beat a number one by throttling Virginia in Charlotte last Friday, two major components of the CBS broadcast were helping bring the historic action to life in their 33rd NCAA Tournament together.

You all know play-by-play announcer Jim Nantz, who will work his 28th consecutive Final Four this year in San Antonio on TBS, but you may be unfamiliar with director Bob Fishman, who’s been in charge of the visual presentation of college basketball’s biggest games for all 28 years with Nantz, plus several more. Fishman worked his first Final Four in 1982, and spent time with Nantz while he was leading CBS’ college hoops studio coverage.

Before Nantz, Bill Raftery, Grant Hill, Tracy Wolfson, producer Mark Wolff and Fishman travel to broadcast the Midwest regional weekend in Omaha on Friday and Sunday, Nantz and Fishman spoke with Awful Announcing about their decades-long partnership and their favorite March Madness memories from behind the microphone and behind the cameras.

“It’s been an honor to work with Bob Fishman,” Nantz told Awful Announcing. “I think inside the industry, everyone knows he’s one of the true icons in the history of the medium. And he’s not only gifted and talented, he’s a wonderful mentor to so many of the production team we have at CBS right now.”

Fishman is just as praiseworthy of Nantz, and not only are their ideas shared openly and freely about how to best utilize shots, angles and storylines for a broadcast, they can almost read each other’s minds after more than three decades working together.

“I’ll sense where he’s going with a story, and I’ll try to have the appropriate shot for him,” Fishman told Awful Announcing. “When you work with somebody for so long, you kind of know each other’s moves.”

Nantz said he’s never really seen Fishman make a mistake as a director, and feels a sense of calm whenever they’re working a broadcast together.

“You’re comforted knowing you’ve got Bob as a vital part of the broadcast,” Nantz said. “When it comes to Bob’s directing of a game, I can’t think in all these years where there’s been any sort of moment where there was confusion or chaos.”

And there have been so many chaotic, iconic, memorable moments over 28 years worth of Final Fours, but both Nantz and Fishman agree that two recent moments stand above the rest.

The first is the 2010 National Championship game, and what could have been. Butler came in as a huge underdog against Duke, even though the game was being played just over six miles from Butler’s campus in Indianapolis. The Bulldogs had a chance to score the monumental upset in its final possession, with star forward Gordon Hayward furiously dribbling towards midcourt. Nantz was calling the game alongside Clark Kellogg.

“He launched it from midcourt right in front of our tables,” Nantz said. “And we had the perfect sightline. You could tell it was not going to be offline. It was tracking toward the hoop as soon as it left his hand.”

Of course, Hayward’s shot barely missed and Duke fans across the country celebrated and breathed a gigantic sigh of relief all at once. But Nantz still thinks about what would’ve happened had Hayward’s shot gone in.

“With time, you start thinking about how epic a finish that would have been,” he said. “It would have ranked up there with the greatest single winning moment in the history of any sport, less the NCAA Tournament.”

Sometimes during March Madness, the moments we remember the most aren’t necessarily the buzzer-beating shot or the Cinderella run. For Bob Fishman, one of his proudest moments as a director came while leading the visuals during quite a horrific scene.

The 2013 regional final also took place in Indianapolis and also featured Duke. But the lasting image from that game isn’t a Blue Devil, or even the fact that Louisville won the game and ultimately the national championship (which we don’t have time to get into). It was Louisville guard Kevin Ware suffering a gruesome, horrific open tibia fracture in his right leg while coming down to get a rebound in the first half. 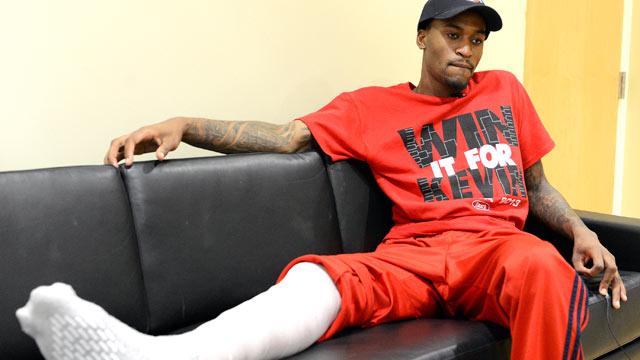 It was Fishman’s job to navigate how CBS would handle how much the millions watching on television would see of Ware’s injury, and what the audience would see during the several minutes of airtime when play was halted and Nantz and his analysts had only so much to say.

“First of all, we only showed only one wide-angle replay, so you could not see the horrific injury,” Fishman said. “And we got a lot of tremendous praise on that because of how we handled it. But it was no surprise to us, because we do things that we think are in good taste.”

The other several minutes were filled by photos of players, coaches and fans of both teams, including Duke head coach Mike Krzyzewski, crying and praying, physically and emotionally devastated by what they had just witnessed. And throughout all that, Fishman elected not to go back and show the injury in full, grotesque detail.

“Believe me, we had horrible angles that we would never put on TV,” he said. “That to me, was maybe one of the proudest moments when I saw our crew step up and not only do the right thing, but provide wonderful pictures.” 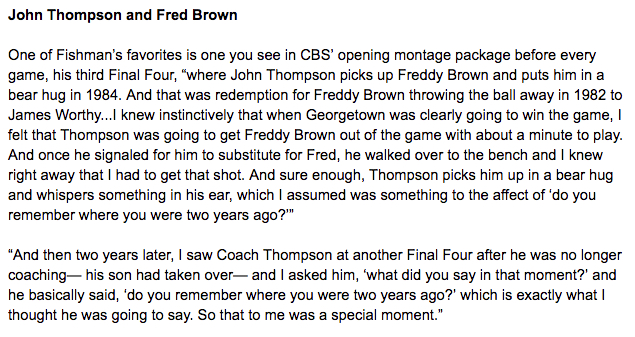 Going back to 2010 in Indy, had Hayward’s shot dropped, Nantz probably wouldn’t have been as enamored with the 2016 National Championship game in Houston.

On April 4, 2016 on TBS, North Carolina had tied the game against Villanova at 74 on an absurdly off-balance 3-pointer by Marcus Paige. After a timeout, ‘Nova had to go the length of the floor in 4.6 seconds to attempt a shot to win.

“The whole thing played out like it was in slow motion,” Nantz said. “It was the coordination that went into that little sequence, both visually and commentary-wise.”

As point guard Ryan Arcidiacono raced past the halfcourt line, “Grant inserted the perfect little setup line, ‘watch out for Jenkins.’ He saw him as the trailer, and I played off of him and said, ‘he gets it to Jenkins, for the championship,’ and of course the ball went in, the shot went in.”

Nantz still looks back and was very proud of how coordinated and improvisational he and Turner Sports’ Hill were during that sequence, a memory Nantz calls one of the favorite of his career in all sports. But after Nantz is done calling the play, it’s up to Fishman to show viewers the agony and the ecstasy that ensued. The enduring shot Fishman went with was of former Villanova head coach Rollie Massimino, who won the 1985 title there.

“Bob knows where everyone is in the building,” Nantz said. So the crew was brainstorming before the game, and the obvious conclusion was that they’d find Massimino if Villanova came away with the win.

“He was there, but he was not well, but he made the trip to support Jay Wright,” Fishman said. “If you’re gonna do a Villanova game, and they win, and Rollie Massimino is in the stands, as a director you’re not doing your job if you don’t have a shot of Rollie Massimino.”

More great moments will play out before our eyes over the next two weekends, but all the great moments of March Madness aren’t solely defined by who wins or loses.

“It’s not just about great finishes,” Fishman said. “It’s about the emotion of the tournament, which I’ve always prided myself on.”