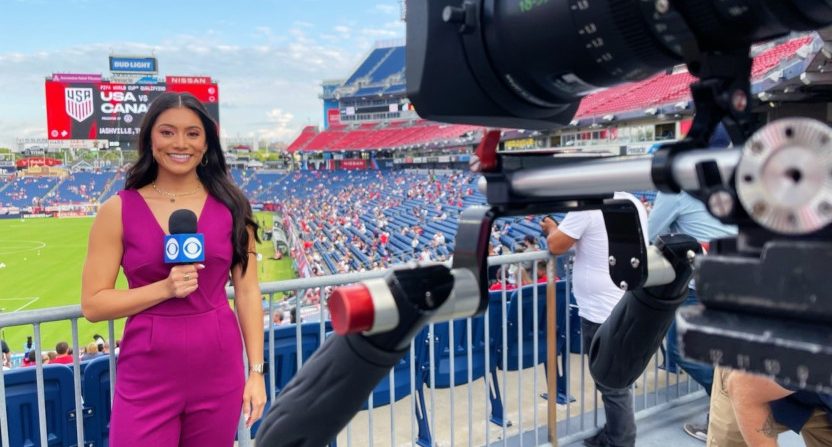 On Thursday evening, CBS will broadcast the FIFA World Cup qualifier between the U.S. men’s national team and Mexico’s men’s national team live from the famed Estadio Azteca in Mexico City, with coverage beginning at 8:30 p.m. Eastern and the match kicking off at 10 p.m. Eastern. Jenny Chiu, a former player for the Mexican women’s team who’s been broadcasting for CBS since September 2020, will be a sideline reporter for this match (alongside current Mexico player Janelly Farías), and she spoke to AA this week about how thrilled she is to get that chance.

“I’m so excited. I don’t think I ever pictured myself on the other side, being a journalist covering this,” Chiu said. “But I feel really lucky to be a part of it in any way. Even just going to the game, I would have gone if I wasn’t working it, because that’s how big of a deal it is.”

There are high stakes for this qualifier, with the U.S. and Mexico both tied for second in CONCACAF qualifying with 21 points through 11 third-round matches. They’re behind first-place Canada (25 points) and ahead of fourth-place Panama (17 points) and fifth-place Costa Rica (16 points). The top three teams will qualify directly for the 2022 FIFA World Cup this fall, but the fourth will have to go to an inter-confederation playoff. And Chiu said she thinks the atmosphere around this match will be incredible, with both the stadium and the stakes adding to that.

“This game is going to be insane. USA-Mexico is always such a big game, but for it to be in the Azteca, that’s something I’ve been looking forward to for so long. I’ve never covered a game there. When I played for Mexico, they teased us one time with the opportunity to play there. We never got it, but I remember I called everyone being like ‘We’re going to play in the Azteca!’ Because it’s such an honor.”

And Chiu (seen at top covering the USA-Canada match last September) said she’s thrilled that CBS is taking their studio coverage on the road for this as well.

“I’m excited that our whole team gets to be there, too. I’m always on the road by myself for CBS, but Clint [Dempsey], Kate [Abdo], Mo [Maurice Edu], everyone will be there on the ground to experience the Azteca, the Mexican soccer royalty [stadium], with me, the person who’s always rooting for Mexico. And the U.S. side is always making fun of me. So I think it will be awesome.”

Chiu comes from a Mexican-American background, and has a lot of passion for both countries’ teams. She said she’ll try to be impartial with her reporting, but she does support Mexico over the U.S. in soccer given her playing history with their national team.

“I think because I’m covering it I’m definitely supposed to take my journalistic impartiality, but my allegiance lies with Mexico soccer. I always root for the U.S. if the U.S. is playing anybody, unless it’s Mexico. If it’s Mexico, Mexico soccer trumps the U.S. just because of the way I represented them and my upbringing in a very Mexican soccer culture. People think it’s hilarious because my brothers choose the U.S., but because I played for Mexico, I spent more time there, I fell in love with the culture and the people, and I could never go up against the Mexican national team. I will always root for them.”

"In the midst of the rivalry, Mexican-Americans face complicated questions of loyalty and belonging…"@jennyachiu caught up with Mexican-American @USMNT players, past and present, to discover how football, family and culture defines the Mexico-USA rivalry for them. ???? pic.twitter.com/a5Oo1iWqV3

She said she wound up playing for the Mexican team thanks to their early-and-often scouting of her, but it wasn’t a grand plan.

“I played with boys growing up in El Paso, which is a border town, and I think that really shaped the kind of player I was at the time. Going to play for Mexico just seemed very natural for me, because I had played with Mexican or Spanish-speaking players my entire childhood. …I went to my first camp with Mexico when I was 12 years old. I had been playing in Mexico, state regionals, nationals, with Chihuahua, I was around eight or nine when I started doing that.”

“So it was pretty natural. Nothing was planned in a way that it was ‘This is what we’re trying to do’; my dad didn’t know anything about the system or whatever, but there were scouts at our games, and they would come and talk to me.  I got pulled into a camp, and all the girls were way older than me, even up to U-20; I was the youngest.”

“But they remained consistent, calling me every couple of years, and saying that when it was my age group’s turn, I would be a huge part of the team and they would build the team around me, I just needed to remain consistent with them. But during that time, I was also doing the U.S. system. I don’t know, I think some people have a plan because they come from experience or their parents played or whatever, but we had no idea; my dad didn’t play soccer, my mom didn’t play soccer, so we were just trying to be open, if there was an opportunity, we would take it. And we got lucky.”

Chiu (seen at right interviewing the USMNT’s Walker Zimmerman) said that kind of luck also applied to her pivot from playing to working in the soccer media world.

“I think it happened pretty organically. I went to go play in Australia just for whatever reason after college; I felt I wasn’t done with soccer. And then I passed a stage of trying to figure out what I wanted to do, and I felt like the only thing I knew that I wanted to do was work in soccer. So I applied for so many jobs in different areas of soccer: NWSL, MLS, etc. I just knew I wanted to be around this game.”

“I started at the Portland Timbers and Thorns as a social intern. Which just kind of worked out; I was good at social media, I had played for the Mexican national team where it was very professional, you had certain rules. So it seemed pretty easy to make that transition. And then when I was there, their reporter had just left the same day that I started, and they found I had a background in journalism and soccer from my resume and asked me to do their interviews while they found another reporter. So I ended up doing their interviews, and not because I went there to do that.”

She said she loved getting to do interviews, and that led to further opportunities for her.

“I was in Portland, I was there four months and then Orlando City picked me up, and then from Orlando City, I started working with CBS and Chelsea at the same time. They had an identical vision of me being an American voice within the European game. And I didn’t apply for anything at CBS, I guess I was just found from word of mouth amongst reporters. I feel really lucky about that. I think this industry takes, like, people saying ‘This is a person with a good work ethic.’ Maybe I got lucky; I don’t know who they interviewed or who they talked to about me, but something positive got them to knock on my door.”

Chiu said soccer remains her biggest passion, and media work is a great way for her to stay involved with it.

“I think it’s been such a huge part of my life for so long, I don’t know anything else that sets my soul on fire the same way.  When I’m working matches, it’s that same kind of passion I felt when I played. I couldn’t get that excitement from anything else.”

“That excitement, that passion, I don’t think anything besides covering a match or watching a match gets that same competitiveness and excitement that I had while I was a player. It’s the most beautiful thing, the most impactful thing in my life. It’s really opened so many doors for me in every way possible. And it’s shaped who I am as a human.”

She said she’d love to keep doing soccer media work, with her ultimate dream being some day to host a World Cup. But she’s open to what ever opportunities come her way.

“It’s potentially hosting a World Cup one day. I’m still really young, and there are a lot of things I need to do before I get an opportunity like that. That’s fine, I’m not in any rush. I’m just enjoying this journey. I think if you overplan it, you kind of block your blessings in a way. I’m just going with the flow. Whenever something comes my way that I think is interesting, that I think I’d be really passionate about, then that’s something I want to do. ”

And Chiu said CBS has proven to be a great fit for what she brings as a broadcaster.

“I got really lucky with CBS because they really align with how I want to cover the game in a very passionate, open way where I can share my opinions and my excitement and not be looked down upon because I’m not fitting into a ‘broadcaster’ box of how this is done. They allow me to be myself and share whatever opinions I want. It’s been very aligned with what I look for in a career, letting me be myself, letting me feel happy, and letting me have a voice.”

CBS’ coverage of USA-Mexico will begin Thursday at 8:30 p.m. ET on CBS and Paramount+, with the match starting at 10 p.m. ET.